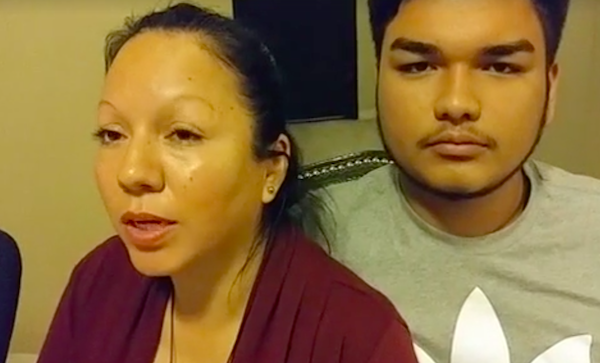 Identity (ID) theft is a crime where a thief steals your personal information, such as your full name or social security number, to commit fraud. The identity thief can use your information to fraudulently apply for credit, file taxes, or get medical services. These acts can damage your credit status, and cost you time and money to restore your good name. You may not know that you are the victim of ID theft until you experience a financial consequence (mystery bills, credit collections, denied loans) down the road from actions that the thief has taken with your stolen identity.

Stealing a social security number is a felony.

Guadalupe García de Rayos is a convicted felon. She is also an illegal alien. She was convicted of identity theft in 2008. She made use of a stolen social security number to gain employment in the US. Read how this was characterized by AZ Central:

Garcia de Rayos has a felony criminal impersonation conviction. The conviction stems from a 2008 work-site raid carried out by then-Maricopa County Joe Arpaio’s deputies. The raid revealed Garcia de Rayos, among other unauthorized workers, had used a Social Security number belonging to someone else to illegally gain employment at Golfland Sunsplash amusement park in Mesa.

See how it was necessary to include Joe Arpaio, reviled by the left for enforcing immigration law.  Garcia de Rayos was finally deported and the MSM absolutely lost its mind over an illegally alien convicted felon being deported.

One of the president’s recent orders prioritizes the deportation of illegal immigrants who have committed crimes. Well, Carter Evans found a woman caught by this order who had been allowed to remain in Phoenix under president Obama’s immigration policy.

In Arizona, an undocumented woman at the center of an immigration uproar has now been deported after 21 years living in the U.S., she was arrested yesterday and shipped back to Mexico today. Now the family she leaves behind is voicing their outrage and pointing fingers at the president.

Go to the link to read the rest of the sob story.

It’s been nearly three years since Brian Bateman’s identity was stolen, and he still finds it painful to talk about.

“Just the thought of doing this interview had me stressed all weekend,” says Bateman, a 38-year-old teacher in Morristown, New Jersey. “I don’t mind talking about it, but it’s just a reminder that every time I think I’m finished dealing with this, something else happens.”

Bateman’s identity was stolen in 2011 as part of a large East Coast identity theft ring that has landed at least seven people in jail. The ringleaders used stolen identity attributes to open credit cards in the victims’ names, then changed the victims’ address information to reroute their mail and hide the evidence. Although Bateman had no money stolen, the crime’s effects have lingered. “I still get collections notices,” he says. “I get 1099 forms for jobs I never held.”

Bateman is proof that even when there are no lasting financial effects, identity theft is far from a victimless crime. The emotional toll can be significant: between the hassle of changing bank accounts and passwords to worries of repeat crimes and lack of trust, being a fraud victim can lead to both psychological and physical distress.

Donald Trump promised to deport illegal alien criminals. The LA Times frets that felons will be considered felons for the purposes of deportation screening.

What drives some of crazy is liberal inability to accept consequences of one’s actions. If you or I commit identity theft, we would be prosecuted and jailed. Do you think Scott Pelley or Lester Holt would be crying about you on national television being “ripped” from your family and life because you committed felony identity theft?

Did either Pelley or Holt worry for the separation of Jessica Franklin or Jesse Ray Chitwood or John Townsend or Jeffrey Ihm from their families?

This is ridiculous. It’s long been said “If you don’t want to do the time don’t do the crime.” Liberals are taking the problems created by their feckless policies and lax law enforcement and trying to make them ours. Then again, liberals have never been big on personal responsibility. Letting Garcia de Rayos stay sends the wrong message. It only incentivizes more illegal invasion and it incentivizes more identity theft.

It is not the fault of Americans that illegal aliens come across the border illegally.

It is not the fault of Americans that illegal aliens commit felonies.

It is not the fault of Americans that illegal aliens engage in actions that have consequences for them and their families. Garcia de Rayos’ children are upset:

They may not deserve it, but that’s something one ought to consider before committing the crime, just as the rest of us US citizens must. Garcia de Rayos knew this was coming.

We are not responsible for this situation. Only one person is- Garcia de Rayos. I am sorry she chose to commit a felony. I am sorry that she wasn’t worried about the consequences her actions would visit upon her family.

She alone is responsible.

Here’s a little detail I have not seen in any other coverage of this event. In 2013:

As for committing felony identity theft? She says she has no regrets.