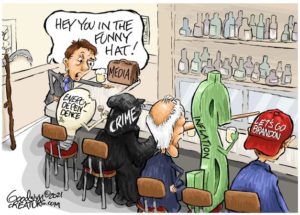 Happy New Year and welcome to Day 353 of the Let’s Go Brandon!* occupation! A year ago I cautioned everyone that 2021 would make 2020 look like 2019, and while I don’t think we’ll see same jumps in idiocy, as the tide is turning. But that also doesn’t mean that things won’t get worse before they get better. But first let’s jump into the wayback machine of four months ago…

It’s a shame that nobody younger than Gen-X will get this, becasue it perfectly summarizes the absurdity of the pandemic & its response.

This is from the school district that Little Bob attends. And if you’re on Facebook, check out the group “Arlington Education Matters”, They’re behind the letter, and the meltdown they collectively had over it will warm even the coldest heart.

I’m looking for a good take on “Those who don’t remember the past are doomed to repeat it”, but this is just too painful.

1/1 – Jonah Goldberg Blames ‘Elites,’ By Which He Means, Everyone But Himself

Jonah used to be one of my favorites, even responded to an email or two I sent back in the day. The sad part is, unlike most of the others who I walked away from when they went off the rails, I have absolutely no idea when I tuned Jonah out. But every once in a while I see articles like this that remond me why I did

“I am Jack’s complete lack of surprise”

Forget the obvious reason to oppose Leftists trying to make our kids as bigoted as your average Leftist. Here is actual evidence showing how DEI is making our kids dumber.

Alternative headline – “Jeb! Cruz officially announces that he has no intention of ever getting elected President”. Although Thomas Lifson at The American Thinker offers an interesting theory.

1/6 – Coddling criminals is an assault on America

1/7 – Ted Cruz: If Republicans Take Back the House, Biden Could Be Impeached

Of course, there’s no need to move Jeb! Cruz into the “Dead to me” category, at least for now. He raises a very good point here

And yes, you can count me among the ranks who’ve joined GETTR this week – you can follow me here. Will it end up disappointing like the rest of the new tech platforms often do? Probably. But the bottom line is that we have to keep moving away from old tech & it will never happen if we don’t at least try to build new communities.

Happy new Year there is reason to be optimistic about “2020” according to Resident Brandon, then Pearl Harbor happened…aww bummer. All those sailors would be alive today if every one would have been vaxxed.

Who knew Ted could catch the AOC variant?
https://babylonbee.com/news/ted-cruz-says-all-his-haters-just-think-hes-really-sexy
Was he also in an office with sexual weird fantasies he was about to be raped by Trump supporters last year?
His best attempt at 2024 run is the chubby look, polls Trump vs Biden and it could only be the size advantage.

Today 3 of our SCOTUS members show they are victims of the mass formation psychosis, Justices Elena Kagan, Stephen Breyer, and Sonia Sotomayor confirmed during Friday’s oral arguments that they are firmly in favor of President Joe Biden’s private sector vaccine mandate.
Its all about debunked vaccine and masks and not if the mandates are constitutional. I’d bet they are looking at twitter hashtag trends for the solemn answer.

Fauci is still the doorman at the Hotel Coronafornia

“Fauci is still the doorman at the Hotel Coronafornia”

I knew you would get it lil’ brother. Did you get any snow? The weather announcers are getting weird here, like bitter cold is unusual in January telling people how to dress, if you dont know the shorts get put away til it hits 45 degrees here you are gonna die anyway.

Oh yes. We had last Sunday’s decision by Northam to not salt the roads basically knock everything behind cleanup schedule. Which meant that Little Bob’s school break extended another week. We are so looking forward to Monday…
On the plus side, when his buddy arrives in a few there’s still enough snow on the ground in one spot we like that I can take them sleigh riding

I thought maybe insurrectionists had prevented you from posting WRL. That would have been worse than the asteroid that killed the dinosaurs, the splitting up of Pangea, Mt. Vesuvius and New Coke all wrapped up together! Whew!

“12/31 – Illinois Holocaust Museum Begins Requiring Visitors to Show Approved Travel and Vaccination Papers” Maybe those who haven’t been vaccinated should have to wear a yellow syringe in a circle with a slash through it. They already aren’t allowed to attend school, eat at restaurants or work with the vaccinated (who are protected but can still be infected by the unvaccinated. See above).

“1/1 – Jonah Goldberg Blames ‘Elites,’ By Which He Means, Everyone But Himself” It’s elite poofs like this that put the idiot Biden in office. People that would have a person fired from a job because they used the wrong fork at a party hate Trump because he isn’t the polite, consummate politician. No, Trump is a mover-shaker that wanted to get things done for this country and it’s people, not play a part in political theater.

“1/2 – CDC Now Treats Unvaccinated The Same As Un-Boosted, Just As DeSantis Predicted” Well, I guess you can consider me unvaccinated, then. I am not taking any more vaccines that are ineffective against the variants. I guess, according to Miriam-Webster, I’m “anti-vax”, too.

“1/3 – Progressives Super Worried About “Rights” They Will Lose If The GOP Takes Control” What a dismal and disgusting vison for the future of the United States of America the left has.

“1/4 – DEI Must DIE” Well, you know what Democrats think of minorities; “They’re just dumb children. We gotta make things easy for them, like remove test requirements, make questions easier, tell them who to vote for, vote for them… thinks like that.” No doubt, the Chinese are twice as concerned with “equity” as we are.

“1/6 – Coddling criminals is an assault on America” Soros = death. Of course you can reduce crime by simply making crimes legal. I’ve never believed liberals were overwhelmingly stupid, but at some point I will have to give up thinking they will EVER get it.

“1/7 – Ted Cruz: If Republicans Take Back the House, Biden Could Be Impeached” Dear God, I want this. There is a long list of legitimate crimes (not just political need) to impeach idiot Biden for. His intentional destruction of our energy independence and security is a good start, but on our southern border, he has ignored and violated numerous laws. In the midst of a raging pandemic, which Democrats themselves stoke the fear of, he has WELCOMED IN over 2.2 million illegal immigrants with a 20% infection rate. Find some innocent citizens that die OF COVID and were exposed to illegal immigrants; that can’t be that hard. Tally the monetary cost of coddling these illegal immigrants. After that, you have Afghanistan, a gross dereliction of duty. When one crime fails, another one is on deck. And that’s just the stuff floating on the surface; just a little investigation will yield MORE justifications. Hunter’s laptop alone possesses enough evidence for 10 impeachments. Impeach this MFer, just like anti-Semitic campaign finance cheater Tlaib said (I hope someone has the guts to say that publicly, just to get the hypocritical leftist reaction).

Then Kamala gets her turn.

Don’t let none of them insurrectionists get ya. I’m going camping.

0
kitt(@kitt)
Reply to  Deplorable Me

Impeachment is a waste unless we have a 2/3 majority in the senate. How about they spend our dime on doing shit that helps the country reading the bills, find where the budget can be slashed, punish waste in the government.

That’s true (unless there are a few Democrats that might do the right thing), so I hope they can get that 2/3rds. It is vitally important that this corrupt puppet is REMOVED. We need to make an example of this unconstitutional, anti-American, racist, corrupt regime. We need show the WORLD that law, order and justice reigns supreme here, not totalitarian fascism.

The main reason I support even a useless impeachment effort is that the only way to end bad behavior by The Radical Left is to make that behavior painful to them. “Both sides need to stop” is just Leftspeak for “We were wrong”

“I thought maybe insurrectionists had prevented you from posting WRL”

Nah, just a really busy morning. The sad part is that I had the post locked & loaded late Thursday & just forgot to publish until lunchtime

I like the approach Matt Gaetz is promoting for the new Congress in January 2023.

Every committee in the House is an oversight committee and its purpose would be to dismantle the administrative state that pollutes the Federal government.

And, President Trump is Speaker of the House for the initial 6 months. He would then resign the speakership to begin campaigning for 2024. The speakership should then be inherited by vote to Jim Jordan.

Republicans should kick all Democrats off all committees and see how they like it. Commence investigations that Congress is not really authorized to perform and smear Democrats with their own actions.

Nah… we shouldn’t descend into the sewer Democrats enjoy operating in. But, idiot Biden needs to be impeached, convicted and removed.

Despite the many reasons I’d like to see Trump run again, the main reason I don’t want him to is he’ll bring more Lefties to the polls than Normals. Just look at how my now Leftoid state of Virginia went Republican in 2021 with Trump hanging back and just quietly supporting the good guys

If all your state has is brine wash it just rinses off in the rain, not the governors call. To not get out the guard in the cluster was just ignorant. They most likely have Oshkosh trucks (highly impressive vehicles built about 25 miles from here) A few inches of white stuff wont slow those down. In fact road side bombs dont stop them.
If you dont have a sled wax up some cardboard.
Schools closed for more than 1 day due to snow? Bwahahahaha
The route we used to take to school 😉
https://i.insider.com/5a5383f1c32ae66b1a8b4c72?width=1340