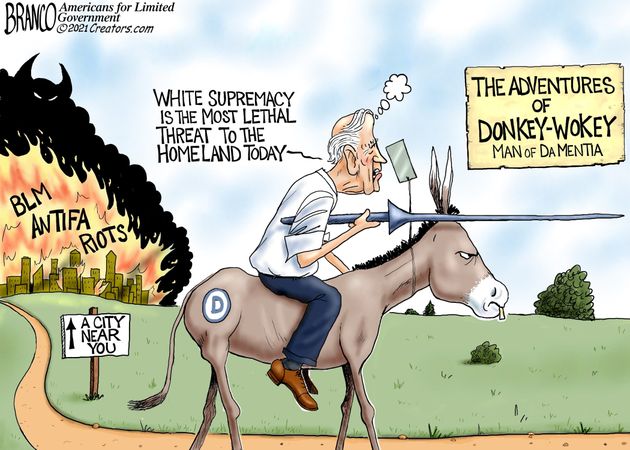 Welcome back to Day 150 of the Harris* Occupation! Let’s jump in:

The Bookworm does another excellent job – read to the end for a succint summary of what a nasty, hateful person our former president truly is.

Little Bob is on BrainPop at school – good to know that this is another element of his education I need to be ready to fight.

6/11 – Joe Biden’s G7 Trip Off To A Rocky Start, Member Of Parliament Calls Him ‘So Senile That He Probably Won’t Remember What We Tell Him’

I could write a few thousand words on that headline, or write nothing at all and say just as much

To quickly sum up, while we might dislike and distrust The Radical Left, they absolutely despise us Normals.

6/12 – What Happens When Hedge Funds Buy Up Neighborhoods

Thankfully the GOP is focused on passing laws to protect us. I don’t know about you, but I’m completely confident that these will protect America just as effectively as the laws we had in 2020 did!

6/14 – North Korean Defector After Attending Ivy League School: Even North Korea Was ‘Not This Nuts’

This one so perfectly illustrates today’s insanity that I’ll just let The Baylon Bee weight in.

The leader of Russia is speaking about the political prisoners our government is holding more forcefully than any prominent Republicans in office. Welcome to 2021!

Actually, they do answer all of these questions. The problem is that The Radical Left’s answer to every question is, “Shut up, Nazi!”

At what point do us Normals wise up and start labeling the Trans movement for what it is – The Radical Left’s latest front in its War on Women?

This is actually the 8th is an ongoing series,

Have a great weekend, and Happy Fathers’ Day!

I hate your stupid “Hate has no home here” sign. We both know you’re lying, anyway. You hate a lot of people. pic.twitter.com/CaRdK8fTxu

There is no deep state, but the IRS can leak tax returns for liberal politics just as the Dem president pushes for new tax policy, and instead of punishing the agency there’s talk of tripling its funding.

There @TIME. I fixo.😘😘😘 pic.twitter.com/vq9QfIAO4B

“white folks’ greed runs a world in need” Hmm… “white folk’s greed”. How about his buddy Al Sharpton? Is it greed that forces him to shake down anyone he can intimidate with his race hustling or some unique brand of altruism? What does he need all that money for? It’s certainly not to pay his taxes. Jay-Z and Beyonce’ bought a $28 MILLION car. Is there no black greed involved there? There is an endless supply of examples that proves the left’s accusations of “racism” is nothing but an attempted power grab. Also when they foolishly try to convince people that something that is glaringly obvious and overt (such as CRT or ANTIFA) is really just a figment of the right wing imagination. I notice Obama pushes a lot more radical ideas as long as someone else puts their reputation on the line to enact them.

What I always find curious about the references to “Jim Crow” is that they are always in the form of an accusation made by the people who created and maintained Jim Crow against those who brought about the end of Jim Crow. I don’t suppose that detail is included in the curriculum.

“6/11 – Joe Biden’s G7 Trip Off To A Rocky Start, Member Of Parliament Calls Him ‘So Senile That He Probably Won’t Remember What We Tell Him’”

We should all be so swelled with pride to have him representing us overseas.

Yeah, but I wonder why violence is on the rise?

We can only enjoy the unity idiot Biden wants to promote when we all submit to all the far left agenda items. Ignore, I guess, that what is opposed here is an existential threat to the United States.

“6/12 – What Happens When Hedge Funds Buy Up Neighborhoods”

A house down the street was on the market for something like $329K and someone bought it for $350K. I wonder…

No, it won’t go away and the more the left tries to suppress it, the more obvious it is. It is pathetic when we have to pass laws mandating enforcing existing laws. Has anyone thought of posting “Election Fraud Free Zone” signs?

“6/14 – North Korean Defector After Attending Ivy League School: Even North Korea Was ‘Not This Nuts’”

Just wait until the Democrats get their police state fully in place.

China and now Russia have both used the Democrats race-baiting lies against us as the Democrats drag the nation more closely resembling their own regimes.

Yeah, you are right; they do answer them and that is their repetitive and reliable answer.

Why do the “rights” of the left wing identity groups always come at the cost of someone else’s rights?

“No, it won’t go away and the more the left tries to suppress it, the more obvious it is. It is pathetic when we have to pass laws mandating enforcing existing laws. Has anyone thought of posting “Election Fraud Free Zone” signs?”

Actually, it won’t go away until fraudsters start getting prosecuted very publicly and start doing hard time. In other words, we need to wait for GOP leadership to grow a spine, so don’t hold your breath

0
Deplorable Me
Reply to  Brother Bob

Even with a spine they have to fight through the Deep State and their commitment to turning the nation into a dictatorship.

[…] Aces has the Sunday Funnies (last Sunday’s). And the week in radical leftism. FA also has a cool new layout and banner […]