Wait, what did you say, obama? You took out Gaddafi to prevent a genocide? 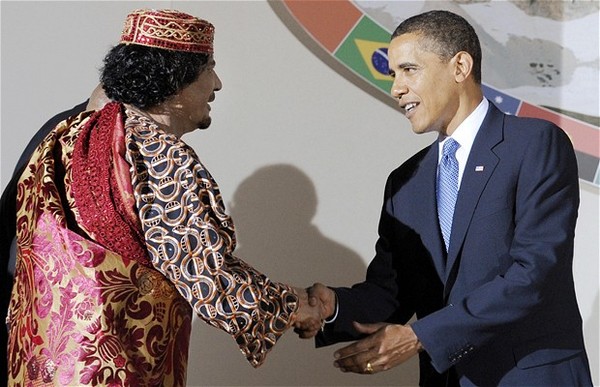 I could have sworn I heard you say that preventing genocide wasn’t enough for US military presence.

“WITH RESPECT TO LIBYA, I HAVE SAID ON SEVERAL OCCASIONS THAT WE DID THE RIGHT THING IN PREVENTING WHAT COULD HAVE BEEN A MASSACRE IN LIBYA.”

Democratic presidential hopeful Barack Obama said Thursday the United States cannot use its military to solve humanitarian problems and that preventing a potential genocide in Iraq isn’t a good enough reason to keep U.S. forces there.

“Well, look, if that’s the criteria by which we are making decisions on the deployment of U.S. forces, then by that argument you would have 300,000 troops in the Congo right now — where millions have been slaughtered as a consequence of ethnic strife — which we haven’t done,” Obama said in an interview with The Associated Press.

“We would be deploying unilaterally and occupying the Sudan, which we haven’t done. Those of us who care about Darfur don’t think it would be a good idea,” he said.

Obama, a first-term senator from Illinois, said it’s likely there would be increased bloodshed if U.S. forces left Iraq.

“Nobody is proposing we leave precipitously.”

Yet that’s exactly what he did.

So let’s see. It wasn’t enough for Senator obama to use military action to prevent genocide but it was enough for President obama.

And without any support from Congress.

And hey, stopping genocide in Iraq was part of the reason Bush took Saddam out.

Gaddafi and Obama: One of them was fighting Islamist terrorists in Libya

Libyan dictator Moammar Gaddafi warned the West about the Islamic extremists in the months before his murder by a mob.  In a series of phone calls, Gaddafi told Britain’s ex-prime minister, Tony Blair, that the Libyan unrest was because of “[a] campaign of colonization; we have to defy the colonization.”

And he predicted that after North Africa was overtaken, the radical Islamists would go after Europe.  Gaddafi’s words are now reality.

This warning is contained in the transcripts of calls between Blair and Gaddafi in February 2011.  Gaddafi died a horrible death in October of that year.

Do read the whole thing