I’m sure you heard about the Sarah Palin divorce nonsense yesterday.  Conservatives 4 Palin stomped on the rumors quickly and gave a bit of a back story to the idiocy:

The release is in response to a ludicrous rumor being spread by Alaskan CNN stringer Dennis Zaki. Zaki, who previously bought into rumors of Trig Truth, picked up these allegations from the same source – the rabidly anti-Palin, Trig Truth-espousing anonymous blogger “Gryphen” of the blog “Immoral Minority”. Gryphen is a friend of Zaki’s, along with fellow Team Truth members Shannyn Moore, Phil Munger, and “AKMuckraker” of the Mudflats.

The rumor was already being picked up and spread around the echo chamber of the Alaskan Team Truther blogs…not only by Zaki, but by fellow Trig Truther “Doctor Phil” Munger of Progressive Alaska.

And they document quite well why the story is so bogus, including statements from Palin and her spokesperson plus pictures of Sarah and Todd definitely being cozy with each other at the same function that these idiots were reporting they were not speaking to each other.

So what do you think the MSM would do about this?  Ignore it maybe?  I mean Team Sarah put the rumor down quickly right?

No, they blame Sarah for answering these false charges.

By having her spokeswoman repeat the charges to rebut them in a public form, Palin effectively guaranteed coverage from the mainstream media that otherwise would not report claims attributed to unnamed sources on an anonymous blog.

OK, Sarah, listen to me. You ignored my very nice open letter, but this is important. You have to fire Meg Stapleton, or give her something easier to do. There are no “so-called journalists” reporting this rumor, but now, they’ll all get to report Stapleton’s denial on your behalf.

Was Mr. Martin around during the campaign? The rules are different when it comes to the media covering Governor Palin. Mr. Martin, do you remember this?

– Palin banned books.
– Palin said that she believed that dinosaurs and humans co-existed.
– Palin charged victims for rape kits
– Trig Palin is not the governor’s son.

And where did all of these things, among others, originate? Blogs, usually with unnamed sources.

Actually Sarah and her team do a fantastic job of putting out these wildfires quickly. Politico can claim that “real” journalists wouldn’t have reported on a story from blogger till they get red in the face but the fact remains many of the stories put out during the 2008 election CAME from bloggers.

Sarah saw how the McCain campaign (specifically Steve Schmidt) handled internet rumors during the campaign. The whisper campaign by the left wing blogs went unanswered, then seeped into the msm, and by then it was too late. People couldn’t differentiate fact from fiction. Was she a book banner? Did she join a secession movement? Is Trig really her baby?

I find the charges from the “real” journalists to be quite telling actually. Sarah cannot win with them. If she doesn’t answer the rumors then the rumors have to be true. If she does answer them then she just helped get the story mainstream…she should of just kept her yap shut.

They are so afraid of this woman.

Meanwhile, Rick Moran believes this may have all been a set up:

I might add that Alaska Report has a about as good a record as Gawker in breaking news – which is better than some MSM outlets but far from perfect. And Gryphen, who apparently started the whole divorce rumor, is even worse.

Nevertheless, once both those sites hit the internet with the story, the blog feeding frenzy on the left began, with a couple of MSM outlets joining in.

As someone who doesn’t consider himself a journalist but who has been around newsrooms for many years, let me just say that if this had come across my desk, I would have smelled a set up. It’s too pat, the pieces fit too nicely together (an “explanation” for why she resigned) not to raise alarms with real journalists. So I think there is at least the possibility, that either someone in the Palin camp with an ax to grind with the media – or, less likely, Palin herself – whispered a few words to a birdie they were sure would get the word to people who would publish it.

The definition of “pwn” is “1. An act of dominating an opponent, and 2. Great, ingenious; applied to methods and objects.” If this was a set up by the Palin camp, it worked magnificently. Now, most of the lefty blogosphere has egg on their face.

Several Alaska bloggers hounded the former Alaskan governor with bogus ethics complaints while she was in office – Alaska Report being one of them. Could a little payback be at play here?

Not far fetched at all, and it just proved to many people how friggin mad those Alaskan bloggers are. The same ones who made bogus ethics claim one after another.

The left is in full freak out mode as they watch their supposed messiah fall to earth. Not only are the poll numbers dropping they see his promises made becoming broken promises. They are freaking out and view Sarah as one of the big threats to their dreams, so she….must….be….stopped. 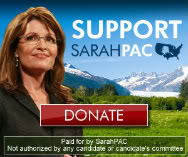