I’ve been extremely tardy in announcing that the 7th Haditha Marine has had his charges dropped.

And then there was one. 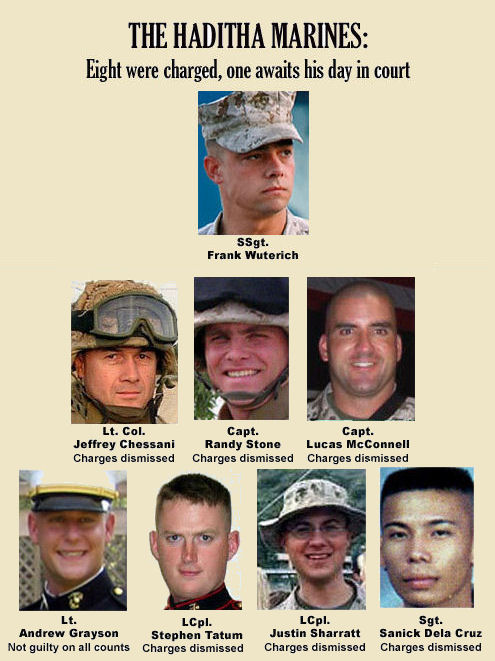 Saying a general overseeing the case had been influenced by an investigator, a military judge today dismissed charges against Lt. Col. Jeffrey Chessani, who was accused of not looking into the killings of 24 Iraqis in Haditha in 2005.

“Unlawful command influence is the mortal enemy of military justice,” said Col. Steven Folsom, quoting previous case law. “In order to restore the public confidence, we need to take it back. We need to turn the clock back.”

The charges can be refiled, but Folsom ordered that the Marine Forces Central Command not be involved in the future, The Associated Press explains. The prosecution has 72 hours to appeal.

Ben Johnson gives a great rundown of the sequence of events regarding the trial aspect of the case:

I can all but guarantee the charges will NOT be refiled. The way this whole event has been politicized by the cowardly ex-Marine Murtha forced the military to proceed with charges that should never had been filed in the first place. Which we now see made some on the prosecuting team act improperly to ensure a conviction.

Sadly, this has ruined the careers of Marines who did a tough job, and did it well. They acted as they were trained to do in combat and for that they were thrown under the bus. The firm that represented Chessani had this to say:

Richard Thompson, President and Chief Counsel of the Law Center, commenting on the judge’s decision had this to say, “We are all grateful for the judge’s ruling today. He truly was the “last sentinel” to guard against unlawful command influence.”

“Tragically, our own government eliminated one of its most effective combat commanders. The insurgents are laughing in their caves,” said Thompson.

And they aren’t kidding. Take a look at this officers resume: (via California Conservative)

And now a very deserving officer has had his career demolished thanks to Murtha and his need to prove Bush was wrong.

Thankfully Murtha isn’t off the hook yet.

In an interview with nationally syndicated radio talk host Michael Savage, the lead attorney for Lt. Col. Jeffrey Chessani said he and his client will look into suing Murtha and the Time magazine reporter Tim McGuirk, who first published the accusations by Iraqi insurgents.

But the attorney, Brian Rooney, said nothing will happen until Chessani, described as a devout Christian and the father of six homeschooled children, is completely “out of the woods” legally…

But Rooney, a judge advocate general officer who served a tour of duty in Iraq himself, said the Marine Corps has until Friday at 10 a.m. Pacific Time to appeal…

Rooney acknowledged to Savage it’s difficult to sue a sitting congressman, but he believes it can be done.

“If he leaves his realm of speaking from the congressman’s point of view … then he can be sued for libel and defamation,” Rooney said.

And I don’t believe the Speech and Debate Clause will apply here seeing as how he made the rounds of the morning talkshows to push these accusations with absolutely NO evidence of wrongdoing and he was not on Capitol grounds. Yes, he doesn’t HAVE to be on Capitol grounds, it basically covers everything to do with his job, but let him explain to the court how it was his job to accuse these Marines with no evidence. Either way it will give the Marines lots of publicity, and lots of bad publicity for Murtha.

And lets not forget the man is already being sued by the last man to face charges. SSgt Wuterich.

I can’t wait to see you squirm ex-Marine Murtha.

Gateway Pundit has many more reactions.