Why a Judge Has Georgia Vote Fraud on His Mind: ‘Pristine’ Biden Ballots That Looked Xeroxed 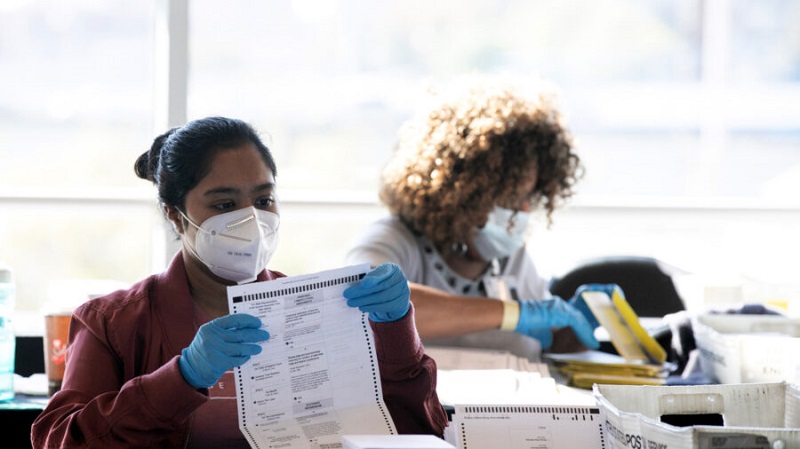 When Fulton County, Ga., poll manager Suzi Voyles sorted through a large stack of mail-in ballots last November, she noticed an alarmingly odd pattern of uniformity in the markings for Joseph R. Biden. One after another, the absentee votes contained perfectly filled-in ovals for Biden — except that each of the darkened bubbles featured an identical white void inside them in the shape of a tiny crescent, indicating they’d been marked with toner ink instead of a pen or pencil.

Adding to suspicions, she noticed that all of the ballots were printed on different stock paper than the others she handled as part of a statewide hand recount of the razor-thin Nov. 3 presidential election. And none was folded or creased, as she typically observed in mail-in ballots that had been removed from envelopes.

In short, the Biden votes looked like they’d been duplicated by a copying machine.

“All of them were strangely pristine,” said Voyles, who said she’d never seen anything like it in her 20 years monitoring elections in Fulton County, which includes much of Atlanta.

She wasn’t alone. At least three other poll workers observed the same thing in stacks of absentee ballots for Biden processed by the county, and they have joined Voyles in swearing under penalty of perjury that they looked fake.

Now election watchdogs have used their affidavits to help convince a state judge to unseal all of the 147,000 mail-in ballots counted in Fulton and allow a closer inspection of the suspicious Biden ballots for evidence of counterfeiting. They argue that potentially tens of thousands may have been manufactured in a race that Biden won by just 12,000 votes thanks to a late surge of mail-in ballots counted after election monitors were shooed from State Farm Arena in Atlanta.

“We have what is almost surely major absentee-ballot fraud in Fulton County involving 10,000 to 20,000 probably false ballots,” said Garland Favorito, the lead petitioner in the case and a certified poll watcher who runs VoterGa.org, one of the leading advocates for election integrity in the state.

He said the suspect ballots remain in the custody of the election officials and inaccessible from public view.

“We have confirmed that there are five pallets of shrink-wrapped ballots in a county warehouse,” Favorito said in an interview with RealClearInvestigations.

He and other petitioners were ordered to meet at the warehouse May 28 to settle the terms of the inspection of the absentee ballots. But the day before the scheduled meeting, the county filed a flurry of motions to dismiss the case, delaying the inspection indefinitely.

“We will be in court on June 21 to resolve these motions,” said Favorito, calling them another “roadblock” the county has tried to throw in their way. He expects talks over the logistics of the inspection to resume after the Fourth of July holiday.

As part of his May 21 order, Superior Court Judge Brian Amero requested officials guard the warehouse around the clock until an inspection date can be set. But just eight days later, a breach in security was reported after sheriff’s deputies left their post for a couple of hours.

“The front door was [found] unlocked and wide open in violation of the court order,” Favorito said.

County officials confirmed that a motion-detection alarm was triggered Saturday, May 29, shortly after the deputies drove away from the building in their patrol cars around 4 p.m. But they said a locked room where the ballots are kept “was never breached or compromised.”

Favorito is not convinced, and his lawyer is seeking to obtain the video footage from building security cameras. “How do we know for certain there was no tampering with the ballots?” asked Favorito, who said he did not vote for Trump.

News of the security lapse caught the attention of former President Trump, who has claimed his loss to Biden was marred by fraud. In a statement, he implied election officials in the Democratic-controlled county are trying to hide evidence of fraud. “They are afraid of what might be found,” he asserted.

Trump is also closely monitoring the ongoing election audit in Arizona, another red state that turned blue in 2020. If evidence of fraud is found in these key swing states, it might help confirm suspicions the election was “stolen” from Trump and the 74 million who voted for him — as a recent poll found 61% of Republicans believe — as well as provide the proof of voter fraud that Democrats and major media have long claimed doesn’t exist.