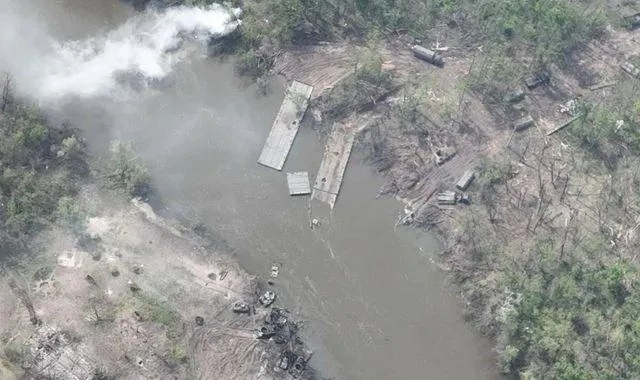 A person who says he is a Ukrainian combat engineer has already claimed the glory of destroying a whole Battalion Tactical Group and killing 1500(!!!) Russian soldiers at a river crossing near Belogorovka. Ukrainian propaganda twitter & BrOSINT are all over it, coming up with ever higher numbers, sharing photos of the battle. What actually happened there?

Let’s take a look. This post will be a mix of my own observations, as well as a translation of the analysis provided by Greatwarchannel.

First off, some basic premises:

1) Photos and short videos with no proper geolocation & date given are inherently not representing a complete picture & even in the best case are nothing more than a snapshot.

2) We don’t know the time period over which the events depicted in such a snapshot occurred.

3) Both sides use a similar set of military equipment. It is difficult, and often impossible, to determine from the available photos and videos the identity of a particular vehicle.

4) Both sides have trophy vehicles from the other side, further complicating the analysis.

5) People pretending to be “Open Source Intelligence” specialists on Twitter are biased to a ridiculous degree, media uses them as “objective” sources, thus disproving Ukrainian war propaganda is an often thankless task of having to “defend” against the most extreme pseudo-analysis.

In addition, one side of the conflict has lied a lot more than the other side about such things, including blunders like using video game footage. If anything, you should try to be as unbiased as possible about tactical claims, but if something comes from the side that posts ArmA 3 videos, some extra scrutiny is in order.

There’s something interesting in Photo 1, namely wreckage of BMP-1s (1, 2 and 4) and also turrets torn off by ammo detonations, from the same type of vehicle (3 and 6)

Another interesting exhibit is 5, which looks like a BTR-D.

BTR-Ds are used by the Russian Airborne Forces, but Ukrainian air and ground forces also have them. The Donbass republics also captured several of them as trophies.

As for the BMP-1s, everything is more interesting. The Russian Army no longer uses the base variant of the BMP-1. They use BMP-1AM “Basurmanin” and BRM-1K, but both of them differ in combat compartment, and here we can clearly see the small single turrets of BMP-1.

The BMP-1 is, however, in service with the LPR and DPR People’s Militias.

This cannot be ascribed to a random battlefield trophy the Russian army picked up.

The gem of this frame is number 10, which with a high degree of probability is none other than the Ukrainian “armored ambulance” based on the MT-LB, namely the MT-LB C, which has been supplied to the AFU since 2015. According to open data, the AFU has about 70 vehicles of this type, which is not that rare.

The nine is clearly an old “motolyga” (MT-LB) which has a small turret.

41, 31 and 35 have visible invasion marks, thus proving that they most likely belong to the Allied Forces of Russia & the Donbass republics (probably the latter, or actually Russian trophies). This, of course, begs the question why all the other BMP-1s, even those in reasonably “good” condition, don’t have invasion marks if they’re supposed to be Russian?

Number 36 is another MT-LB, looks like the turret was also blown off.

Number 38 is not clearly identifiable.

Numbers 39 and 40 are T-72 tanks, possibly the B modification. Both look mostly undamaged. We’ve called the war a “Late Soviet Tech Genocide” before, most of the vehicle losses are among the APCs and IVFs.

Numbers 43 to 47 are various river crossing equipment, much of it used by both sides (e.g. the the PMP-60).

Now, what does this tell us.

1) According to the composition of the burned equipment, we see the presence of the Russian and Ukrainian armies, as well as forces of the LPR or DPR. We can no longer write off the entire pile as Russian casualties.

2) As can be seen from photo 5, the path there is well-traveled, which is understandable. After the bridges got blown up, such a convenient crossing place could not go unnoticed by both sides.

3) Thus we come to the most likely version of what happened at the crossing near Belogorovka. Both sides liked the place of the crossing. First the Ukrainians, but the Russian (Allied) forces suffered losses during the crossing as well.

4) The “mix” of equipment and its condition indicates that the sides fought over the crossing for some time (probably about a week) until it fell into the hands of the Allied Forces.

5) This is also indicated by Ukrainian photos and videos taken from a respectful distance. The crossing is clearly not under the control of the Ukrainian forces, otherwise the internet would have been FLOODED by close-ups of corpses and vehicles. They are notoriously prone to TikTok victories.

6) There are no bodies in the shots, which suggests that one of the parties had the opportunity to remove them.

America will lose a nuclear war with Russia and their allies.