The Mountain of Data Showing How Authoritarian Democrats Have Become 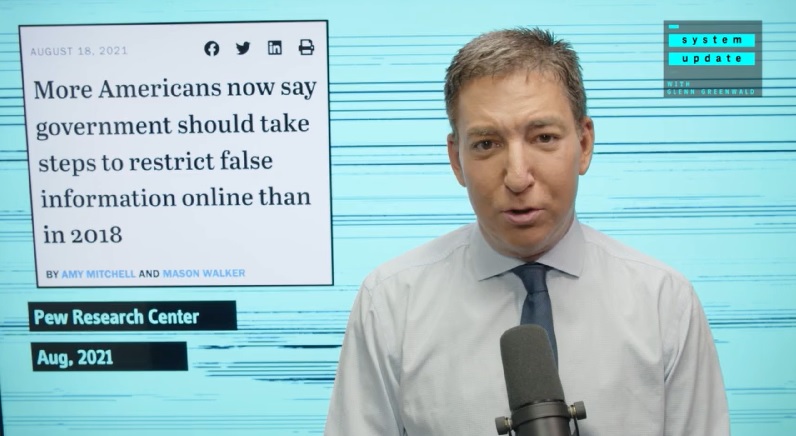 Now authoritarian is a word that gets cast around a lot in our political debate. It’s probably almost certainly the case that in some occasions there are factions or groups or wings of each political faction that have authoritarian tendencies. But when you examine this data that I’m about to show you and really compile and look at it all at once, it is extraordinary no matter how low your expectations are of Democrats, how authoritarian they have become, particularly in the wake of the Trump years. And again, it’s not going to be my word or my analysis or my speculation or my interpretation on which I’m going to be asking you to rely, but simply the hard, concrete evidence, the data demonstrating how it is that they think, and how they now hold widely, classically authoritarian views.

So let’s take a look, first of all, at a relatively new research survey from Pew in August of 2021. So just two months ago I asked whether Americans want both tech monopolies, but also the government, to censor the internet in the name of combating false information. The whole idea of the internet when it emerged in the 1990s and the reason people were so euphoric about it for the next decade was because it was supposed to liberate us from centralized corporate and governmental control. It was supposed to empower human beings to communicate among ourselves ideas and information without having to depend upon or be constrained by large corporations, or, especially, government. And yet, as we know, increasingly, both the government and large corporations have imposed a stranglehold on what we are and aren’t allowed to say online when it comes to political speech. This survey was designed to determine how Americans feel about that, and particularly how they feel about that based on their partisan identity.

And the results are incredibly stark. You see the headline of the graph from Pew that reads “Partisan Divisions have widened over the role of government and tech firms in restricting misinformation.” So if you look at this first part of the chart, which is on the left, they ask all Americans, all adults, “the percentage of people who believe,” quote “the U.S. government,” not Facebook or Google. “The U.S. government should take steps to restrict false information online, even if it limits freedom of information.” And that blue line that you see skyrocketing from 2018 to 2021 represents the views of self-identified Democratic and Democratic leaning partisans, and you see it going up by 25 points from 40% in 2018 to 65%, just under two thirds of Democrats want the government, the government that their party controls, at least at the moment, to censor the internet and to restrict what the government deems false information, even if it means limiting freedom of information.

You see the red line, which is Republicans going in the opposite direction. It already began in 2018, lower than the Democrats. Only 37% wanted the government to do that, but now only 28% percent of Republicans favor that. So it’s a difference of almost 40 points more, almost 40 points. This huge gap between Democrats who want the government to censor the internet and Republicans who do not. On the question of whether they want tech companies, giant corporations, that they claim they usually distrust, to take steps to restrict false information. So we’re talking about Google, Facebook, Apple, Amazon. Do you trust companies like this to restrict false information from online, even if it limits freedom of information? 76% of Democrats, 3/4 of Democrats want tech giants to control and police and restrict the internet, even if it means losing freedom to that information, whereas only 37% of Republicans favor that. So again, a huge gap.

Now, just this chart alone, if you think about what an authoritarian mindset is, you could obviously list multiple examples, but one leading one would be that our speech, our political discourse should be controlled not by us and should not be free, but should be controlled by corporate power, centralized corporate power, and by the government. And that specifically, the internet should no longer be free but controlled by those institutes, that’s what Democrats overwhelmingly favor. How can anyone deny that Democrats have become incredibly authoritarian? No matter what you want to say about Republicans, it’s Democrats who overwhelmingly favor both government and corporate control of the internet in the name of political speech and combating misinformation, while Republicans overwhelmingly want the internet to remain free. Those numbers are just indisputable.

Now, let’s look at a separate line of questions to see how authoritarian Democrats have become, and that is people’s opinion on the secret security services that have long dominated American politics outside of democratically accountable institutions like the CIA and the FBI. Here is a 2018 survey from Pew that has a headline that asked those questions and concluded, quote, “Majorities expressed favorable opinions of several federal agencies, including the FBI.” So majorities of Americans have a favorable opinion of the FBI in 2018. But the subheadline tells the real story, which is Republicans’ views of FBI have grown more negative in the past year, and if you look at the actual breakdown, you’ll see how wide the partisan divisions are that Democrats overwhelmingly revere and approve of and place their trust and faith in the FBI, whereas Republicans do not. Here’s the graphic that reads partisan gap and favorable opinion of FBI widens driven by decline in positive views among Republicans among Republicans or Republican leaders, you see that line dropping for favorable views from 71% in 2010 to 55% in 2018. The disapproval number has gone way up, whereas for Democrats, look at this gap. It’s over here that this gap, it’s as if there’s almost no distrust any longer. Among Democrats, 78% of Democrats approve of the FBI, only 12% say they have an unfavorable opinion of the FBI.

Now, why does having such a political party which almost unanimously places their faith and trust in the FBI make them authoritarian? Let’s look at what the FBI actually is before we do that. Here’s one other interesting and revealing pie chart from that same poll that shows that not only is there this huge gap among the FBI. 73% of Democrats approve of the FBI, only 55% of Republicans. But for the CIA. 69% of Democrats. Sixty nine percent approve of the CIA, the Central Intelligence Agency, 62% of Republicans in 2018 do. I’m about to show you a poll shortly where in 2021, the number of Republicans that now trust the CIA has collapsed. So the Partizan breach is even bigger. But 70 percent of Democrats approve of the CIA. 78 percent of the FBI. That’s not an authoritarian party. Someone tell me, what is? The Pew Analysts tell the story, quote, “Today 23% gap in views of the FBI among Republicans and Democrats is among the widest of the ten agencies and departments asked in the survey. While 78%of Democrats and Democratic leaning independents have a favorable opinion of the FBI, 55% of Republicans and Republican leaders say the same. They go on to say views among Democrats have changed little in recent years. A wide share, 78% is favorable toward the FBI, compared with just 12 percent of Democrats who give unfavorable ratings as a result. Today, the 23% point gap in favorable ratings among Republicans and Democrats stands at its widest on record more than ever today.”

Democrats trust the FBI, and Republicans do not. Why is that so significant? Let’s look at what the FBI is. There is the headquarters of the FBI in Washington. That’s where people like James Comey and Robert Mueller when he was the FBI Director, Christopher Wray, the whole litany of FBI Directors, J. Edgar Hoover, worked when they were running the FBI and appropriately, the name of the building in which the FBI headquarters is situated is still called the J. Edgar Hoover FBI building, named after the FBI director who terrified and terrorized our elected officials for decades by keeping secret dossiers on them to ensure that none of them could ever challenge him without knowing that he had the ability to destroy their lives.

That is what this institution always has been and continues to be that Democrats overwhelmingly revere, and in the past 15 years we’ve had countless pieces of evidence showing that the abuses by the FBI of our basic political rights and of the law is not something of the distant past, but continues very much as vibrant as ever. Here is a 2007 Reuters headline that references a report that the FBI abused its power to get private records. So going back to 2007 under the Bush administration, they were simply violating the law to get private records on whoever they wanted.