The Fakest “Whistleblower” Ever 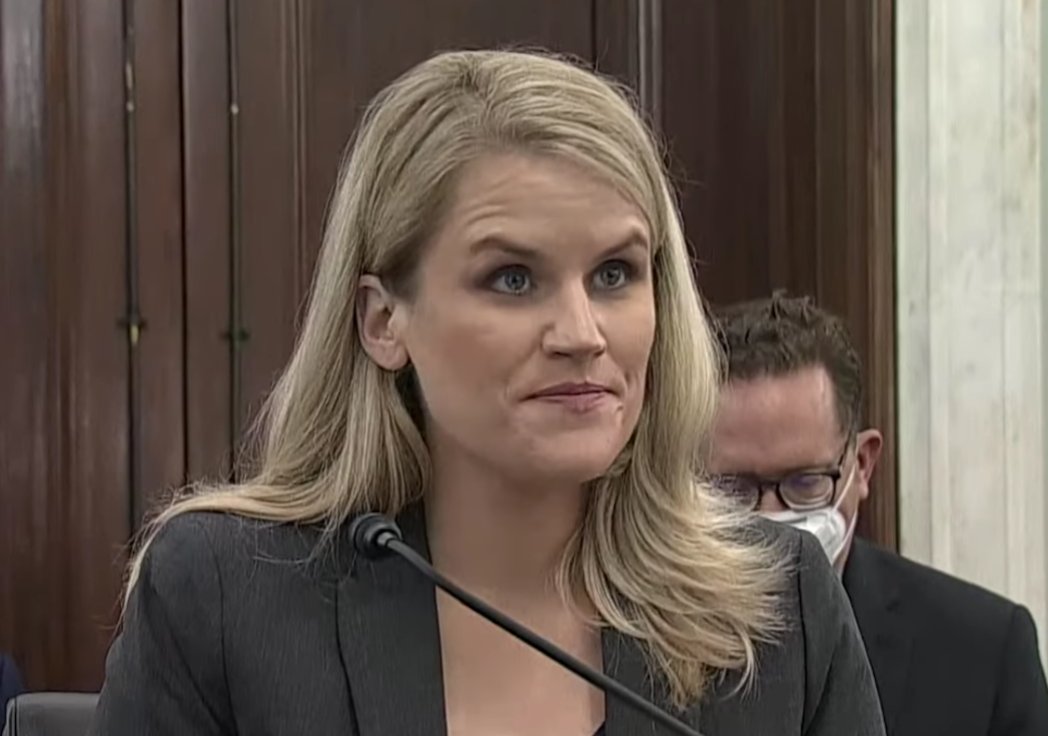 In a lesser-noticed but revealing portion of Frances Haugen’s stage-managed PR tour last week, the vaunted “Facebook Whistleblower” took a moment to show off her “national security” credentials for Republican Senator Dan Sullivan of Alaska. After the two had finished rehearsing all the reasons why American children are at such grave risk from a dangerously unregulated internet, they pivoted to another topic — that being Haugen’s previous experience at Facebook working in what she describes as “counter-espionage” operations. Yes, you read that right: Haugen was apparently a “project manager” at something called the “threat intelligence org,” located deep in the bowels of Facebook, at which she claims to have presided over a team carrying out “counter-espionage” ops on behalf of Mark Zuckerberg.

“I believe Facebook’s consistent understaffing of the counter-espionage information operations, and counter-terrorism teams, is a national security issue,” Haugen warned, agreeing with Sullivan about the Facebook-based threat posed by state actors such as China and Iran. (What kind of Facebook-related espionage is she referring to exactly? Unclear. Perhaps sardonic Ayatollah memes.)

“I believe the fact that Congress doesn’t get a report of exactly how many people are working on these things internally is unacceptable,” Haugen continued. “Because you have a right to keep the American people safe.”

And there Haugen revealed a major reason why she has been treated to such effusive “bipartisan” praise ever since she burst onto the scene last week with a superbly choreographed 60 Minutes special. On top of her argument that Facebook must more aggressively regulate political speech — and her calls for the Federal Government to more aggressively involve itself in these speech regulation activities — Haugen is also fluent in the BS-infused jargon of “natsec,” thus making her appear Extremely Serious. This is quite crucial. She’s naturally adept at rattling off impressive-sounding terms like “threat intelligence org,” the mere mention of which elicits nods of solemn affirmation from lawmakers, think tankers, and other similarly Serious individuals who gather to be imparted with her incredible wisdom.

“I have strong national security concerns about how Facebook operates today,” Haugen told Sen. Dick Blumenthal (D-CT), who then pledged to hold additional hearings exploring this other facet of Haugen’s alleged “whistleblowing.”

The title of “whistleblower” was bestowed so swiftly onto Haugen because it’s intended to confer virtue and selflessness, and by dint of being unanimously labeled a “whistleblower,” Haugen attains a kind of saintly moral status. But notice that “whistleblowers” only seem to receive this kind of coordinated official endorsement if they are telling powerful factions exactly what they want to hear, and Haugen has done just that. Once the saintly status is attained, questioning her motives or political prescriptions is deemed sacreligious. Try to find a single establishment orthodoxy as regards “Big Tech” and speech regulation that Haugen’s statements have undercut rather than strengthened, and you will come away empty-handed. Nevertheless, her trailblazing nobility has been extolled throughout the media and in Congress, with hardly a critical word even whispered.


“You are a 21st century American hero,” effused Sen. Ed Markey (D-MA). “She is courageous, authoritative, and utterly convincing,” gushed Johana Bhuiyan, the Guardian’s chief tech reporter. (How much “courage” does it really take to waltz into the spotlight with a guarantee of mandatory adulation? Does anyone think that Haugen hasn’t already been deluged with further lucrative employment opportunities? What great sacrifices has she made, exactly? She’s even been invited back to address Facebook itself, notwithstanding the mortal danger one would have thought she faces as a “whistleblower.”)

“A lot of the coverage has been really, really positive,” Haugen reported at a Zoom event hosted by Yale Law School last week, and boy is she ever right. You’d almost think Haugen is an angelic figure who descended from the heavens, and not someone whose image has been finely-crafted by a professional PR operation, which just so happened to perfectly orchestrate her primetime TV debut as a lead-in for her hotly anticipated Senate testimony. She even touts herself explicitly as a “whistleblower,” which is kind of strange — usually “whistleblowers” just kind of humbly and even reservedly accept that title, rather than turning it into a multi-platform branding exercise. Then again, it’s also strange that Twitter had a coveted “blue check” waiting for her right as her 60 Minutes segment aired:

She also participated in a meeting with the European Commission last week and will soon be called to testify before the UK Parliament. Has any other “whistleblower” ever gotten such over-the-top Red Carpet treatment? If a “whistleblower” is immediately feted and glorified by the world’s most powerful institutions, perhaps “whistleblower” is not the most apt term.

“Functionary” might work better. Indeed, Haugen has conceded that she doesn’t even have an inherent problem with the massive power wielded by Facebook, she just thinks that power ought to be wielded more judiciously — in accordance with her political and cultural priorities — with the help of government regulators.