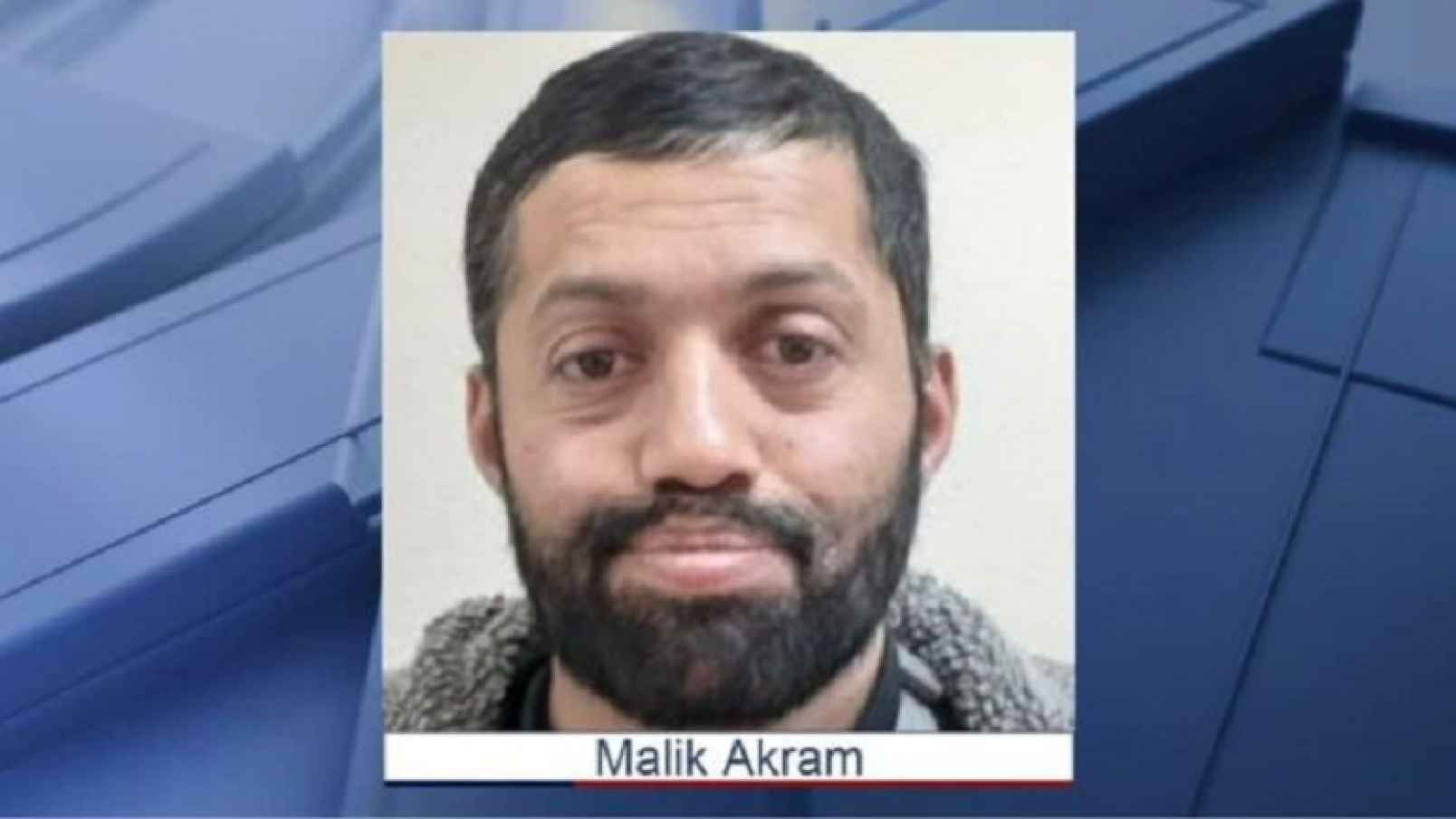 The hostage crisis at Congregation Beth Israel, a Reform Temple in Texas, ended with Faisal Akram of Blackburn, another post-industrial English town where Muslims make up a third of the population and Pakistanis account for over 10 percent, dead, and his Jewish hostages set free.

Back home, the Blackburn Muslim Community page announced that “Faisal Akram has sadly departed from this temporary world” and prayed that Allah “bless him with the highest ranks of Paradise”.

The BMC page had previously promoted a “charity” event to raise money for “Palestinians” by the Human Relief Foundation, which had been banned by Israel over its ties to Hamas.

The town has produced no shortage of Jihadists, including the youngest terrorist in the UK, as well as a number of Jihadis who traveled to join ISIS, an associate of shoe bomber Richard Reid, and a terrorist who played a key role in an Al Qaeda plot that targeted New York and D.C.

Blackburn is one of the most segregated towns in the country and has been described as a “no-go zone”. The area that produced the Temple Terrorist has the highest Muslim population outside of London where some claim that flying the English flag has been effectively outlawed.

The setting couldn’t be any better for the media to whitewash the murderous terrorist with the familiar excuses that he was the victim of failed integration in the United Kingdom. His family, in an even more familiar excuse, is claiming that he “was suffering from mental health issues”.

That, along with the claim by FBI Special Agent in Charge Matt DeSarno that the terrorist, “was singularly focused on one issue, and it was not specifically related to the Jewish community”, is becoming the very familiar narrative for covering up the latest Muslim terror attack.

But antisemitism, like Islamism, was part of the air that Faisal Akram breathed in Blackburn.

Salim Mulla, Blackburn’s former mayor and current Labour councilor, claimed that Israel was behind ISIS and school shootings in America. Last year, four Muslim men from Blackburn took part in a “Palestinian” convoy while shouting, “F*** the Jews… F*** all of them. F*** their mothers, f*** their daughters and show your support for Palestine. Rape their daughters and we have to send a message like that. Please do it for the poor children in Gaza.”

Siddiqui aka Lady Al Qaeda, on whose behalf the Texas synagogue attack took place, was married to the nephew of 9/11 mastermind Khalid Sheikh Mohammed, and had assorted recipes for mass murder in her possession when she was captured. Despite graduating from Brandeis, a formerly Jewish university, she demanded at her trial that jurors undergo DNA tests to prove that they are not Jewish. And the Aafia Foundation posted bizarre antisemitic rants about the “degree of poisonous venum (sic) within the heart of American mainstream jewry”.

The hatred of Jews, like the hatred of all non-Muslims, is a crucial motive for Islamic terrorism.

If Blackburn is a miserable place, the tale of the Akram family may reveal why. The official family statement by the terrorist’s brother, Gulbar Akram, claims that “although my brother was suffering from mental health issues we were confident that he would not harm the hostages” and denied that the FBI had rescued the hostages from being killed by his brother. “Don’t believe the bull#### in the media they were released from the fire exit and Not rescued.”

The Blackburn Community message describes the terrorist as having brothers named “Gulbar”, “Malik” and the “Late Gulzameer Akram”.

The best way to cover up a terrorist attack is to shift the context. And that’s what they’re doing. But it’s important to dig into the true context to understand the true origins of the Texas attack.

In his book, Among the Mosques, ex-Islamist Ed Husain described Blackburn as “another global hub for the Deobandis and the Tableeghi Jamaat” where the mosques pray for the destruction of the enemies of Islam and texts declare that “there can be no reconciliation between Islam and democracy”.

The Deobandis, who control many of the mosques in Blackburn, originated the Taliban.

Aafia Siddiqui, better known as ‘Lady Al Qaeda’, is a Deobandi, the terrorist on whose behalf Faisal Akram took a synagogue hostage, and a popular cause with Pakistanis. A few years ago the Pakistani Senate had even named the Islamic terrorist, the “Daughter of the Nation”.

Indian Mujahideen co-founder Riyaz Bhatkal had plotted to take Jews hostage a decade ago in order to force ‘Lady Al Qaeda’s release. British Muslim “charities” were a major source of funding to the Jihadist group as they are for many Pakistani Jihadist enterprises.

While much has been made of the advocacy on behalf of Siddiqui by CAIR and other Islamist colonists in America, top Muslim politicians in the UK also vocally demanded her release, including Lord Nazir Ahmed and Lord Altaf Sheikh.

When Husain visited Blackburn, he warned that, “it is clear that a caliphist subculture thrives here, a separate world from the rest of British society.”

Tableeghi Jamaat, whose mosques are known as “breeding grounds” for Jihad, is closely intertwined with Pakistani Islamism and vectored Islamic terrorism. Quite a number have joined Al Qaeda. It is no coincidence that so many Islamic terrorists have come out of Blackburn.

Nor is it a coincidence that the latest Islamic terrorist attack on America originated there.

Sorry, not sorry the dirtbag camel jockey is dead. Now, if we could eradicate significantly more, the world will be a better place.

Video of synagogue hostages making their escape…
followed by gunfire

Be careful what you post a bill has been introduced by the ranking member of the Jihad Squad. We already have established rights for freedom of religion, this one would criminalize those that exercise their free speech.
https://www.jihadwatch.org/2021/12/ilhan-omars-bill-to-combat-islamophobia-passes-the-house
Extra rights for one religion? She has an anti-Semitic problem, perhaps suffering from mental health issues?

COLLEYVILLE, TX—In a press conference after the synagogue hostage situation this weekend, the FBI said they are still looking for a motive that would explain why an Islamic extremist would attack a Jewish house of worship.

“Please be patient with us, because determining motive is really really hard,” said Special Agent Deebles McPaddycake to reporters. “To be fair, we still haven’t even figured out a motive for the 9/11 attacks yet. Who knows what drove a coordinated team of Islamic extremists to fly planes into buildings? According to our best experts, these men were victims of white supremacy, and they seemed to really hate buildings—so that’s probably why they did that. We’re still working on it though. It’s a real mystery.”
FBI Director Christopher Wray confirmed that they will get around to investigating the motive behind the synagogue shooter as soon as they finish up their investigation into the motives behind the “baffling” attack on the World Trade Center. “We may need 4-5 more years of investigation to find any answers,” he said.
FBI agents are also looking into the mysterious reasons why the entire country hates the FBI, but say they may be 10-15 years away from any clear answers. “We’re pretty sure it has something to do with white supremacy,” said Wray. Joe Biden on Muslim Hostage-Taker: I Don’t Think There is Sufficient Information to Know Why He Targeted That Synagogue (VIDEO)

biden was not sure about motive either. It would seem Palestinian moslems have had a love affair with the
jewish people for centuries.

This is the same stupid idiot that assumed mounted Border Patrol agents were whipping Haitian illegal immigrants (believing, I guess, that horses have steering wheels), condemned the Border Patrol of being racists on the spot and promising punishment. Like the rest of his racist, American-hating party, he is quick on the draw to condemn anyone or anything that he and his party can exploit but very careful to possibly offend terrorists.

I have too much respect for shit to call this idiot a piece of shit.

And Biden gave him a tourist VISA. That guy absolutely epitomizes “tourist”

I hope he at least had his vaccination paperwork in order. THAT’S what’s important.

His family, in an even more familiar excuse, is claiming that he “was suffering from mental health issues”.

But, let’s look at the positive aspects. It’s been years and years since white supremacists carried out a terrorist attack and took hostages, so huzzas to the FBI for keeping us safe! It’s also been, well, forever since white supremacists took over 6 city blocks of a city, killed people trying to come in without permission and handed out guns to random people. Good work, protectors of the nation! We have also been totally white supremacists laying siege to federal courthouses, so make sure to show your appreciation.

Days since a known Islamic radical with a criminal record that just walked into the country, bought a random firearm and held a synagogue hostage to release another terrorist? 3

thank the gay, muslin terrorist obama and the demented pedophile. 20-30% government agencies are infiltrated with jihadi and isis cells. Not to mention russian, north korean, and china sleeper cells in the federal gov. WOW! and 2 anti-Semitic now sit on SCOTUS

Mike Huckabee: How Can We ‘Keep America-Hating Anti-Semitic Terrorists Out of Our Synagogues When We Can’t Even Keep them out of Congress

Jihadi’s Last Words: “F$$king Jews… I’ve Come to Die” – But Biden and FBI Had No Idea Why He Took Hostages at Texas Synagogue