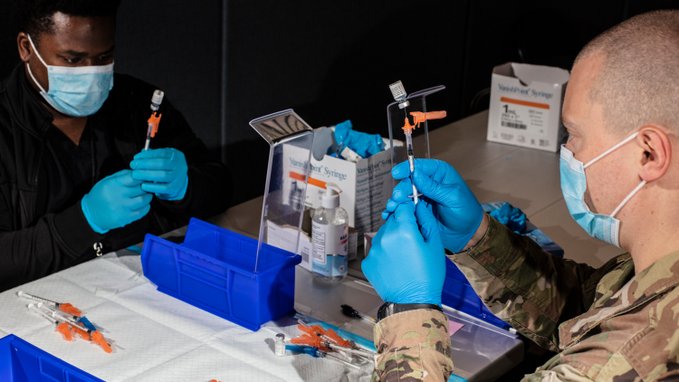 Josef Biden promised to have 70% of Americans vaccinated for covid 19 by the Fourth of July.

Less than half the people are vaccinated today. He failed miserably. It’s on him, not us, because he promised something and failed to deliver on it. He failed because he never bothered to ask a simple question:

Why don’t people want to get vaccinated?

I mean it is free and it should protect you from a deadly disease that has killed 1 in 539 Americans. Selling this should be like selling ice cream on a hot day.

But Biden blew it.

The media spin is that it is those darned Trump supporters, which is an interesting scapegoat. If more than half the adults are unvaccinated and all of them are Trump supporters, that would mean he won the last election by a landslide.

The reality is President Trump’s Operation Warp Speed made the vaccines possible. He got the vaccines and began their distribution.

Biden took over the program on January 20. He boasted that he would do a better job than The Donald.

According to the Kaiser Family Foundation, 47% of white people and 34% of black people were vaccinated as of July 6.

Politico rightly held Biden accountable for the failure to get black people vaccinated.

Last month, Politico reported, “The Biden administration knew the key to a successful covid vaccination campaign would be reaching the most vulnerable populations. But more than five months in, even a blueprint that’s worked with other ethnic and racial groups isn’t doing enough to win over Black Americans.

“Less than a quarter of Black Americans had received their firstcovid-19 shot as of June 7 based on available federal data, amid a weekslong stagnation that has defied the government’s ramped-up effort to accelerate vaccinations and reach the nation’s most vulnerable communities.

“The slowdown has put Black Americans behind the pace set over the past month by other racial and ethnic groups tracked by the Centers for Disease Control and Prevention. The trend line worries health officials and experts who say the immunization drive is running into a particularly complex web of distrust, outreach challenges and stubborn barriers to access.”

Why has Biden failed to convince black people to get vaccinated? He convinced an overwhelming majority of black voters to vote for him. Vaccination should be easy.

Politico reported, “Health experts cite myriad factors: Ingrained skepticism of a federal government that’s historically failed minorities when it comes to public health, difficulties getting the transportation or time off to seek out a vaccine or a lack of community outreach, among others.”

Those sound like excuses for the bureaucracy. I would think an employer would want its employees to be vaccinated.

As for the historically ingrained excuse, well when you tell people that the system is rigged against them (which is what systemic racism means) why on Earth would they trust the system? Dial back the rhetoric. There hasn’t been a lynching in roughly 40 years. Jim Crow died far earlier than that. It’s the 21st century now.

Then there are the vaccines themselves. Many people believe that if after you are vaccinated you still have to wear a mask to prevent catching the virus, then to a layman, you really aren’t vaccinated.

The New York Times (which I don’t link) ran a piece by Kwame Anthony Appiah, a medical ethicist, who asked, “As a Doctor, May I Refuse to See Unvaccinated Patients?”

The column began with a query from a doctor, who said, “I’m a family physician in private practice. More than 225 of my patients have been infected with the coronavirus. Some were hospitalized, some were placed on ventilators and more than a few have long Covid symptoms.

“When the vaccines became available, not only did I and my staff get vaccinated, but we also assisted our patients in procuring vaccination appointments. By spring, more than 80% of my patients were fully vaccinated, and we can now offer unvaccinated patients the convenience of vaccination in our office. A significant segment of our practice consists not of vaccine hesitant but of vaccine refusing.

“We attempt to create a nonjudgmental, nonshaming atmosphere for our patients to express their reasons for refusing the vaccine. Many have bizarre, almost delusional reasons for not getting vaccinated. Others have fallen prey to misinformation online. Because our patients often take mass transit to their appointments and because our office is in a high-rise and because I offer telehealth appointments, is it ethical and in the interest of public health to restrict vaccine-refusing patients to telehealth appointments?”

The short answer is that unless it is a life-threatening situation, a doctor may refuse a patient.

But as a covid vaccinated person who skips flu shots annually, the question reveals why people are hesitant. The doctor’s reluctance to be exposed to unvaccinated people undercuts confidence in the vaccine.

Blowing off  the unvaccinated as unintelligent Fox News viewers does no one any good. Reasonable people can disagree on every subject and they usually do. The refusal by liberals to even hear the other side’s point of view is narrow-minded. Instead of working with people to get them vaccinated, liberals have used the Saul Alinsky tactics of isolating opponents and ridiculing them.

The majority of the country now opposes vaccination. As the doctor in that New York Times article said, they gone from being vaccine hesitant to being vaccine refuseniks, comrade.