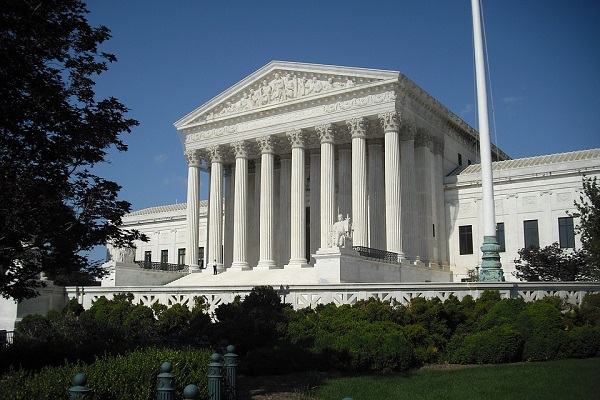 In 2020, a presidential election year, Floyd’s death while in the hands of Minneapolis police “sparked” protests (AKA bloody riots) in Democrat-run cities across the country.  Democrats may angle for something similar should Justice Alito’s draft majority opinion overturning Roe v. Wade be issued.

Leaking Alito’s draft upending Roe v. Wade was suggested as a rogue left-wing law clerk’s attempt to scuttle the opinion’s issuance.  Don’t buy it.  The leak was orchestrated to impact the 2022 midterm elections.  At the very least, Democrats to fire up their feminist base.

Facing disaster in the midterms, Democrats aim to fall back on their 2020 playbook: manufacture fear and uncertainty.  Lie — and lie a lot — in that ending Roe v. Wade, they’ll claim, denies a woman her “sacred” constitutional right to kill the baby whom she acted to make.  And stoke unrest — belligerent protests and, perhaps, havoc — hoping voters will cast ballots for Democrats to sue for peace.  Security fencing has already gone up around the Supreme Court.  Protests materialized there instantly.

Remember when Senate majority leader Chuck Schumer made this threat about abortion cases coming before SCOTUS?

On Tuesday, Schumer’s remarks made it clear that Democrats intend to turn Court decision ending Roe against Republicans.  Schumer branded the Court’s conservatives as “extremists” and “far right.”  From Fox News, May 3:

Make no mistake, the blame for this decision falls squarely on Republican senators and the Senate Republicans as a whole, who spent years pushing extremist judges, spent years confirming three far right justices to the Supreme Court, but who claimed somehow this day would never come[.] … But this day has come and we will fight it all the way.

Democrats won’t just make life hell for the justices who strike down Roe and for Republicans.  They’ll make hell for the rest of America to demonstrate that opposing “progressive” aims comes with heavy costs.  Civil unrest related to Roe v. Wade might broaden out.  We may see mobs materialize to oppose a range of conservative positions (guns, climate, school sex indoctrination) and notable persons (Trump and DeSantis).

Alito’s opinion, if issued, won’t end ghoulish abortion on demand in America.  It’ll simply devolve the issue to the states.  As was the case pre–Roe v. Wade, states will craft their own laws on abortion.  Federalism at work translates to state-based abortion laws that may impose prohibitions or restrictions or permit unfettered abortion.  But facts don’t matter to Democrats, who’ve turned against our founding, becoming, to varying degrees, Leninists.

What matters to them is the narrative, which is tailored to shape perceptions and outcomes.  What Democrats want is abortion on demand — and the power to brook no opposition.  Government is to facilitate — indeed, subsidize — that “right.”  Government should compel religious-affiliated health care institutions and insurers to provide abortion procedures and coverage.  Opposition to supporting and participating in abortions is to cease; abortion takes precedence over constitutionally safeguarded acts of conscience.  The Little Sisters of the Poor will be rudely shoved aside, along with their constitutional guarantees.

Isn’t that where Democrats are going, abridging Americans’ constitutional rights to favor their ideology and agenda?  Their unremitting attacks on our founding (1619 Project); our history (racist); our institutions (racist); and, finally, the Constitution (the construct of a privileged white patriarchy) occur because all are considered roadblocks to “resetting” America.  The nation must eventually acquiesce to a globalist cabal’s schemes.

First, constitutional guarantees, checks and balances, and federalism must be bulldozed.  Absolute consolidation of power in Washington is a requisite step.  As the Democrats’ agenda from January 2021 forward amply demonstrates, their aim is the unrestricted imposition of a leftist (unfree) worldview on Americans.  You will submit or be canceled.

To that end, perhaps Homeland Security’s new, creepy “Disinformation Governance Board” will brand arguments for life and against abortion as disinformation worthy of censorship?  After all, killing a baby in the womb is an unalienable right.  Democrat-aligned social media will be in the vanguard.  Pro-life expressions are to be restricted to places of worship and homes.  Public expression of pro-life support will meet with penalties.

Perhaps pro-life demonstrators will be tarred as insurrectionists, subject to arrest and incarceration?  Why wouldn’t Democrats finally act to brand speech advocating for life and peaceful assembly against abortion as “threats to democracy”?

Nowadays, does any of that seem far-fetched?  What would odd Nina Jankowicz say in an unguarded moment?

Corporate media, always eager to shill for Democrats and the left, spun the riots and bloodshed as “mostly peaceful protests.”  Many of the riots — if not all of them — were stoked by BLM and Antifa.  Democrat mayors and city councils stood down police as mayhem and terror ruled the streets.

The riots served a critical purpose for Democrats, 2020 being an election year.  Donald Trump had to be defeated.  Trump was the problem.  Doddering Joe Biden was the solution.  The riots, along with the COVID pandemic scare and related draconian shutdowns, were means of injecting voters with fear and anxiety.

Authoritarians to totalitarians — and Democrats are somewhere on that spectrum — see fear, disruption, and conflict as tools in their quest for power.

Bad news for Democrats is unrelenting.  There’s literally no major issue where Biden and Democrats enjoy the confidence of an American majority.  Newt Gingrich believes that Democrats could lose up to 70 U.S. House seats.  Four or five Senate seats could swing the GOP’s way.

If Democrats lose Congress, their only alternative is to push the White House to govern aggressively by executive order, meaning fiat.  Constitutional limitations be damned.  The U.S.-Mexican border is a clear example of the Biden administration governing against laws as it wishes.

Login
wpDiscuz
81
0
Would love your thoughts, please comment.x
()
x
| Reply
‹ Back to Categories