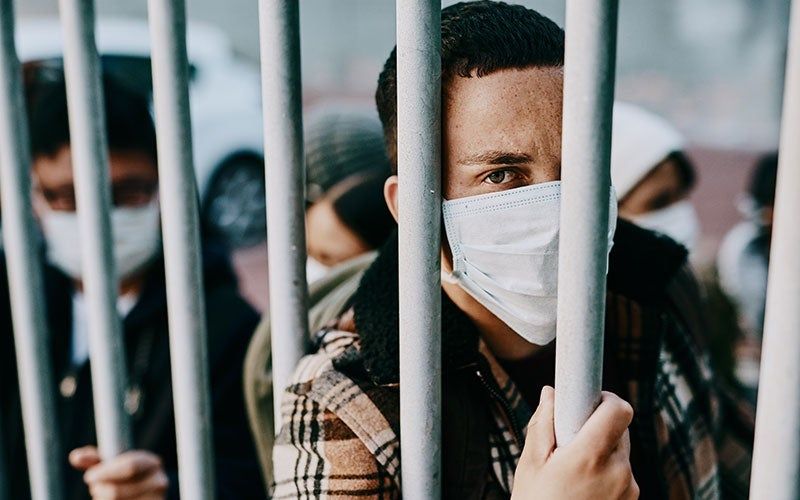 Is there ever any doubt that this is where the “anti-fascist” left was always headed?

Democrats were more than twice as likely as other voters to favor harsh government restrictions being placed on unvaccinated people’s lives, ranging from fines to loss of child custody, according to a recent poll conducted by Rasmussen Reports and the Heartland Institute.

Forty-eight percent of Democratic voters said the government should be able to fine or imprison those who publicly question the COVID-19 vaccine’s efficacy, while only 27% of all voters supported the proposal, according to the poll results.

Fine or imprison people who… question the efficacy of a vaccine whose efficacy has been increasingly questionable.

Fines against those who refuse to take the vaccine were viewed favorably by 55% of Democratic voters and just 19% of Republicans, and 59% of Democrats favored a policy requiring unvaccinated people to stay inside their homes at all times, except for emergencies, the poll found. Seventy-nine percent of Republicans opposed a house arrest policy for unvaccinated people.

Forty-five percent of Democratic respondents favored the government forcing people into “designated facilities” until they get the vaccine — a measure opposed by 71% of all voters.

A government program using digital devices to track the movements of unvaccinated people and ensure that they are quarantined or socially distancing was opposed by two-thirds of likely voters, but 47% of Democratic respondents supported the idea of such a program.

29% of Democrats support the state taking children away from the unvaccinated people.

The same people who shrieked about “family separation” for illegal border-crossers!

Rasmussen’s report on Democrat support for fascism is here.

The survey found that 75% of likely Democratic voters — but only 21% of Republicans and 38% of unaffiliated voters — have a favorable opinion of Dr. Fauci. Among other findings of the survey:– Fifty-eight percent (58%) of voters would oppose a proposal for federal or state governments to fine Americans who choose not to get a COVID-19 vaccine. However, 55% of Democratic voters would support such a proposal, compared to just 19% of Republicans and 25% of unaffiliated voters.

— Fifty-nine percent (59%) of Democratic voters would favor a government policy requiring that citizens remain confined to their homes at all times, except for emergencies, if they refuse to get a COVID-19 vaccine. Such a proposal is opposed by 61% of all likely voters, including 79% of Republicans and 71% of unaffiliated voters.

— Nearly half (48%) of Democratic voters think federal and state governments should be able to fine or imprison individuals who publicly question the efficacy of the existing COVID-19 vaccines on social media, television, radio, or in online or digital publications. Only 27% of all voters — including just 14% of Republicans and 18% of unaffiliated voters — favor criminal punishment of vaccine critics.

— Forty-five percent (45%) of Democrats would favor governments requiring citizens to temporarily live in designated facilities or locations if they refuse to get a COVID-19 vaccine. Such a policy would be opposed by a strong majority (71%) of all voters, with 78% of Republicans and 64% of unaffiliated voters saying they would Strongly Oppose putting the unvaccinated in “designated facilities.”

— While about two-thirds (66%) of likely voters would be against governments using digital devices to track unvaccinated people to ensure that they are quarantined or socially distancing from others, 47% of Democrats favor a government tracking program for those who won’t get the COVID-19 vaccine.

How far are Democrats willing to go in punishing the unvaccinated? Twenty-nine percent (29%) of Democratic voters would support temporarily removing parents’ custody of their children if parents refuse to take the COVID-19 vaccine. That’s much more than twice the level of support in the rest of the electorate — seven percent (7%) of Republicans and 11% of unaffiliated voters — for such a policy.

President Biden’s strongest supporters are most likely to endorse the harshest punishments against those who won’t get the COVID-19 vaccine. Among voters who have a Very Favorable impression of Biden, 51% are in favor of government putting the unvaccinated in “designated facilities,” and 54% favor imposing fines or prison sentences on vaccine critics. By contrast, among voters who have a Very Unfavorable view of Biden, 95% are against “designated facilities” for the unvaccinated and 93% are against criminal punishment for vaccine critics.

The left really ought to slow their roll on supporting these kind of fascisitic punishments against detested political outgroups because we’re listening, we’re taking notes, and we’re making future plans based on your current ones.

Not at all surprising

Its all about controlling or taxing “other” people an illusion control freaks ie Democrats sell of making your life better.

Forty-eight percent of Democratic voters said the government should be able to fine or imprison those who publicly question the COVID-19 vaccine’s efficacy, while only 27% of all voters supported the proposal, according to the poll results.

The far left fascists are still the minority, but they ravenously want, and believe they deserve, the power to dictate policy in the United States. This is why their Election Fraud Voter Bill is so important to them; with fair and legitimate elections, they will NEVER attain the power… ABSOLUTE power… they crave and need to control human lives. Most are so ignorant, they KNOW fascism is bad but don’t realize they are practicing it. They don’t even know what it is except it’s a bad name to call someone they want to diminish.

Those who support idiot Biden as well as those with fascist tendencies are a small minority in America. Fascism and totalitarianism is how a political minority rules a population. Democrats are dying to have this power over US citizens.

Two democrat presidents have already done it, Wilson a known racist and FDR a dictator, now we have a “President that is both. The SCOTUS backed up FDR.
It took until DJT’s admin to overturn the decision.
https://thefederalist.com/2018/06/26/trump-travel-ban-case-supreme-court-overturns-decision-affirming-fdrs-japanese-internment-camps/
Yes they need to pack the court.

the scam is coming to an end. even starbucks has dropped the mask and vax mandate