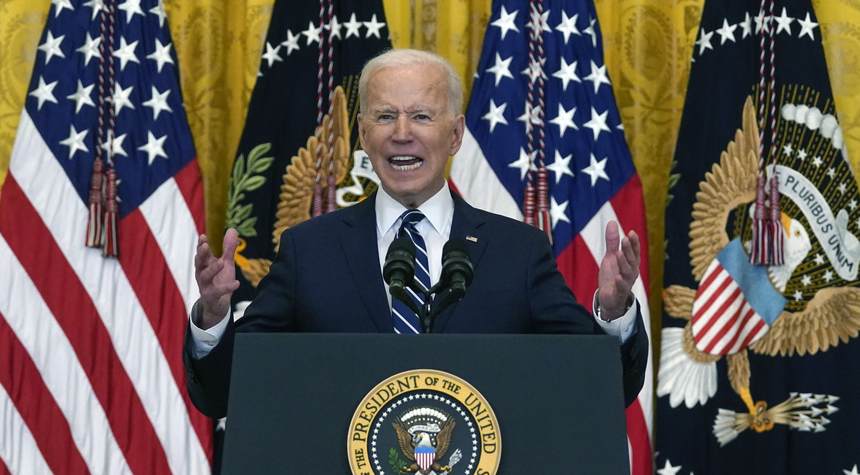 It’s been 48 hours since President Joe Biden gave a train wreck of a speech in Georgia and told the American people that if you don’t agree with changing the Senate rules on the filibuster and/or federalizing elections, you are no better than prominent racist Democrats of the past including Bull Connor, George Wallace, and Jefferson Davis.

For those who believed Biden’s campaign promises of being a “uniter in chief,” it was a shocking moment, a dramatic turning point in his presidency. For the rest of us who have long been familiar with Joe Biden’s history of fanning the flames of racism for political gain including trying to sabotage the SCOTUS confirmation of Clarence Thomas, it was further evidence that Joe Biden is who we’ve always said he is: one of the most ruthless, cutthroat people in politics when he doesn’t get his way.

What’s happened in that 48 hours since Biden went full-metal woke in front of that Georgia crowd? He’s been roundly criticized, not just by the right but by some on the left as well, including the Senate’s second in command Dick Durbin. Much worse than that for him, though, the Supreme Court just blocked him on the private workplace vaccine mandate.

On top of that, Democrat Sen. Kyrsten Sinema took to the Senate floor earlier today to let Biden know in so many words that his smear tactics from Tuesday will not work on her, and that she is still committed to preserving the filibuster, which pretty much guarantees his agenda will be nuked.

After Sinema’s speech, fellow Democrat Sen. Joe Manchin endorsed her statement, saying that “I think it’s the points that I’ve been making for an awful long time and she has, too.”

With one loss after another piling up on Biden after his failed attempt at strong-arming his political opposition, he appeared before the cameras a couple of hours ago after a private meeting with Senate Democratic leaders (Sinema gave her speech a few minutes prior to that meeting), and the signs of defeat were there. Gone was the “we will get this done” attitude we’ve heard and seen from him in the past. In its place? A visibly flustered Biden, who acknowledged that he didn’t know if “we can get it done”:

“Who counts the vote? That’s what this is about, that’s what makes this so different from anything else we’ve ever done,” he added.

“I don’t know that we can get it done but I know one thing, as long as I have a breath in me, as long as I am in the White House, as long as I’m engaged at all, I’m going to be fighting to change the way these legislatures [are] moving,” he told reporters before stepping away from a microphone without taking follow-up questions.

Biden, appearing to admit defeat on ending the filibuster & nationalizing elections, randomly starts shouting: States’ voter reform laws are “about who gets to count the votes! Count the vote! Count the vote!” pic.twitter.com/66LpGL1ckQ

That’s the look and sound of someone who knows he’s lost the argument, and who realizes that he screwed the pooch with his bitterly divisive speech yesterday in which the man who has zero political capital one year into his presidency tried to “persuade” holdouts by playing the raaaacism card. It backfired – big time.

He is a demented fool whose elected by voter fraud regime is imploding faster by the day. FJB and all of his comrades.

FJB’s meds are not working. soon he will be back in the basement and all of a sudden his health will fail, what ever that means, and he will resign or found dead in bed from some imaginary problem.

He is flustered because those young men keep walking those shepherd dogs on HIS LAWN! There was only one thing to do https://thenationalpulse.com/2022/01/13/white-house-builds-wall-with-no-explanation/

The biden regime ended on 01/13/2022. The democrat party is going to lose historic numbers in the House and the Senate in the midterms this year. The House will gain 100 seats and hold the majority for 100 years. biden is a doddering feckless old man who has no place or busines as the current white house occupant….

President Trump won the 2020 election and the evidence is overwhelming of his victory. None of the chaos that is currently happening now would have occurred if the election had not been stolen.

biden is the current occupant of the White House because of ‘who counts the vote’. If the vote had been counted legitimately he’d be somewhere else.

Democrats will HAVE to employ more fraud to try and defend their grasp on power in 2022. Perhaps they will commit so much the will finally expose themselves to the point that it cannot be covered up by their Ministry of Propaganda. Desperation causes mistakes.

Yeah, Democrats want laws that not only allow them and them alone to determine WHO votes but, just in case, to be able to COUNT the votes as well, as they did in so many instances during the 2020 counting when Zuckerburg-funded Democrat operatives chased off or blocked observers from witnessing the counting. This is the thin, tenuous thread our freedoms hang by right now: the integrity of two Democrats who politicized the impeachment process and supported an IC-led coup against a duly elected President.

Idiot Biden acts like his CCP pension is at stake if he doesn’t get the creation of the socialist single-party totalitarian police state established while the puppeteer’s strings are attached to him. The case for a 25th Amendment intervention grows stronger and stronger.

“A Year After Promising a Change in Tone, Biden Has Failed So Far to Do That” – MSNBC’s Chuck Todd Slams Joe Biden (VIDEO) He’s Getting Worse – Joe Biden’s MLK Jr. Speech was Delivered from Fake White House Set and It Was Prerecorded

biden is a fake potus. No way he is able to fulfill even 1% of the required daily requirements to be potus…