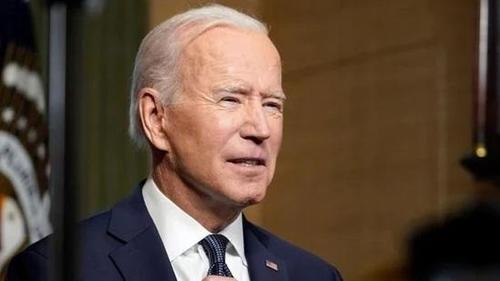 According to the Associated Press, President Joe Biden today will support changing the filibuster rule for voting rights legislation — a move widely viewed as effectively killing the rule. The report says that Biden will portray the choice starkly as one between democracy and autocracy. The AP, however, does not reference the third option of hypocrisy by failing to note that Biden vehemently opposed such moves for decades. He previously denounced killing the rule as “disastrous” for our democracy but now will declare the rule itself to be an existential threat to democracy. It is the latest example of President Biden’s embrace of “whatever it takes politics.”

Biden will use a speech at Atlanta’s Ebenezer Baptist Church to complete his abandonment of his long-held position. AP quotes his expected address to include the following statement:

“The next few days, when these bills come to a vote, will mark a turning point in this nation. Will we choose democracy over autocracy, light over shadow, justice over injustice? I know where I stand. I will not yield. I will not flinch. I will defend your right to vote and our democracy against all enemies foreign and domestic. And so the question is where will the institution of United States Senate stand?”

Biden showed equal passion as a senator to denounce those who would find excuses for abandoning the filibuster rule. He called such efforts “disastrous” and proclaimed: “God save us from that fate … [it] would change this fundamental understanding and unbroken practice of what the Senate is all about.”

After six months of uncomfortable silence as president, Biden later said that, as president, he continued to support the rule. Putting aside certain factual and historical errors, Biden declared that killing the rule would “throw the entire Congress into chaos and nothing will get done. Nothing at all will get done. There’s a lot at stake. The most important one is the right to vote, that’s the single most important one.”

It appears now that, even if “God [might still] save us from that fate,” the President will not.

His colleagues, including then-Sen. Barack Obama (D-Ill.) and now-Majority Leader Chuck Schumer (D-N.Y.), gave equally full-throated endorsements of the rule being denounced today as a thoroughly racist relic.  Schumer, who is now also pushing for the change, previously said to abandon the rule would be “doomsday for Democracy” and reduce the United States to a “banana Republic.”

While President Biden may have found his natural resting place in the conflict between politics and principle, the move against the filibuster rule will only aggravate our deep divisions.

The Democrats would force through a sweeping federalization of state election laws for the first time in our history. It would federally preempt the laws in dozens of states and declare that Congress, not state legislatures, will now dictate how people vote in states like Georgia. It is notable that Georgian politicians like Sen. Raphael Warnock will be standing next to Biden in Atlanta as the President calls for setting aside Georgia’s own laws. (Stacey Abrams who is running for governor will not attend the event). Previously, Biden was criticized for misrepresenting the provisions of the Georgia law.

What is most striking is the inherent conflict in this logic. President Biden is going to a state where representatives passed voting rules as part of their democratic process. He is effectively saying that they must protect democracy from itself and support Washington dictating the rules in Georgia.

While denouncing the “Big Lie” of those who questioned the last election, Democrats in the same breath are arguing that the next election might be illegitimate or might be stolen under current election laws. Democratic leaders have insisted that Trump began that Big Lie by seeding doubts months in advance of the 2020 election due to the laws in blue states. Now those leaders are seeding the same doubts about the laws in red states before the 2022 election. (Indeed, despite recent denials, some of these same leaders who denounced the Big Lie are the same people who previously called the Trump election “illegitimate” and some supported challenges to electoral votes in Congress).

It is also worth noting that federal laws already protect against rules that inhibit or curtail the votes of minority citizens. Other laws are subject to judicial review if they curtail the right to vote generally. Indeed, many of these laws are being challenged by Democrats in court. The federal legislation is needed because these laws have been upheld by the courts as constitutional and nondiscriminatory.

For some voters in these states, the federal takeover of their election laws is not likely to resonate as a victory of democracy. Election laws have largely been left to the states in our constitutional system. If those laws are constitutional, the view was that each state could follow its own approach to issues like voter identification rules. While the Congress can condition the receipt of federal funds on improving election administration (and reinforce constitutional protections for minority voters through laws like the Voting Rights Act), this is an unprecedented federalization of election laws to dictate how elections are administered.

In abandoning his long-held position, President Biden is choosing divisive politics over principle. This will further deepen the anger and divisions in our country. It will fuel claims that these laws are somehow illegitimate or laying the foundation for autocracy.

I previously wrote why the filibuster rule was designed for times like this:

Pushing through such controversial measures with bare majorities and on straight party lines will only deepen the divisions and increase the rage in this country. So this is precisely a time when the filibuster can play a positive role, by forcing legislation to pass with a modest level of bipartisan support. It requires consensus and compromise at a time of growing, violent division.

…The filibuster has gone through historic controversies through the centuries, from opposing Caesar to opposing civil rights. But as a consensus-forcing rule, its time may have arrived, to the chagrin of many.

This move may also be soon regretted.

“The next few days, when these bills come to a vote, will mark a turning point in this nation. Will we choose democracy over autocracy, light over shadow, justice over injustice?

They chose their path long ago when they dedicated themselves to election fraud: it’s autocracy all the way. Totalitarian police state. One party dictatorship. That’s the Democrat’s goal.

In abandoning his long-held position, President Biden is choosing divisive politics over principle.

The only principle Democrats have is that the ends justifies the means. Trample the Constitution whenever necessary, ignore laws, violate rights, whatever it takes to put the leftist totalitarian dream into place.

Provide an example of someone being denied their right to vote. There are none. Demanding ID only INCREASED the amount of voting. Democrats don’t want bi-partisan support or a consensus; they know NO ONE but far left Democrats wants this shit, so why pretend? It only benefits the Democrat elites, making bad candidates getting elected far easier (i.e., idiot Biden).

Democrats should also face the possibility that even if they kill the filibuster and pass their Make Election Fraud Legal bill, it would be challenged in courts and not be available for 2022. If the Republicans win as predicted, they would have control of Congress and the Democrats would have no filibuster protection. Of course, like Democrats did when McConnell rubbed Reid’s nose in the elimination of the judicial filibuster, Democrats would whine and cry about how unfair it is to use their own tactics against them.