When Joe Biden’s Health and Human Services made the announcement earlier this month (LINK) that they were taking full control over Monoclonal Antibody drugs (mAb) in order to begin rationing the highly effective treatment for COVID-19 infection, several people sounded alarm bells as there was the potential for rationing of COVID treatment based on political ideology.   Representative Chip Roy of Texas was one of the first to raise concerns (link).

The change in HHS approach followed republican governor Ron DeSantis of Florida promoting the use of mAb and opening up dozens of treatment centers throughout his state.   Other governors quickly took notice of the effective action plan of DeSantis in Florida and started to follow that path. 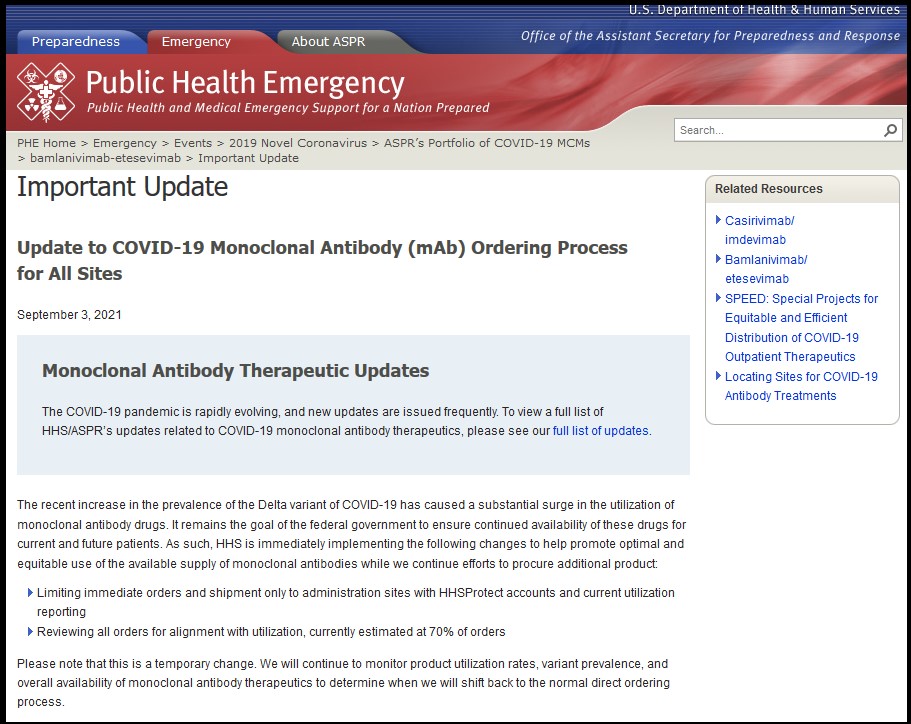 It took a week for the new HHS restrictions to impact the pre-existing orders.  However, now Alabama is the first state to draw attention to the problem Joe Biden’s administration is creating by rationing mAb treatment and making determinations on which states should be allowed the “equitable use of the available supply“; a fancy term for “rationing” the life-saving treatment based on alignment with the political ideology of the government in control of it.

Newsweek – Albama doctors are concerned about the impact on health care systems after the U.S. Department of Health and Human Services (HHS) decided to temporarily limit monoclonal antibody order. […] Dr. Scott Harris, Alabama’s state health officer, told Newsweek that the shots are key for protecting a person against hospitalization and death … “It can be a lifesaver if given in the first 10 days of symptoms,” Arora said about monoclonal antibodies. “We’re calling on the federal government to help us provide more of this treatment, not less, so we can save lives and keep COVID patients out of the hospital.”

[…] Monoclonal antibody treatments have been authorized for use only in high-risk patients who either tested positive for the coronavirus or were knowingly exposed. That’s still a broad swath of people, given that high risk includes anyone with a body mass index over 25, so surges in cases can quickly deplete supplies.

Since the treatments have shown promise in keeping people out of the hospital, Alabama had plans to increase the number of locations where people can receive monoclonal antibodies. Those were put on hold following the HHS announcement, and Alabama’s Department of Public Health urged physicians to ensure that only those who qualify for the treatment receive it and prioritize patients based on the likelihood a person will become seriously ill. (link)

The approach of the federal government moving in to control mAb treatment does not come in a vacuum.  When you consider the U.S. federal government approach to dismiss the effective use of Ivermectin as a COVID treatment; and then consider the “vaccine-only” approach is being applied with extreme pressure from within the U.S. healthcare industry – which includes threats against doctors who do not comply with that outlook; a very clear picture is emerging.  All treatment approaches are being blocked in order to force people to take the mRNA gene therapy.

It is one thing to demand people take the mRNA gene therapy (aka “vaccine”), it is another thing entirely to block treatment options in order to force vaccination as the only method of survival from infection.

Against this backdrop those fences being installed around Washington DC take on a different perspective.

The Joe Biden regulatory agency A.M.A is threatening doctors with their licenses if they speak against vaccination. (link)