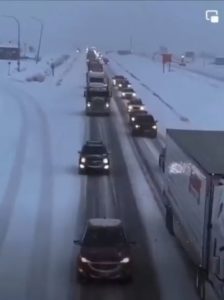 The previous record was 5 miles/7.5 km long, so I’d say they have that beat.

Truck drivers in Canada are protesting vaccine mandates on their industry with a massive convoy that may break a world records.”It’s 70 km long,” Benjamin Dichter, spokesman for the Freedom Convoy 2022, told the Toronto Sun. “I have seen footage from an airplane. It’s impressive.”

The Freedom Convoy left from Vancouver for Ottawa on Sunday to protest the federal government’s vaccine mandates for cross-border truckers, which took effect on Jan. 15. The Canadian Trucking Alliance estimates that roughly 15% of truckers in the country are not fully vaccinated, or about 16,000 truck drivers.

Because the protest seems popular, the totalitarian leftist blackface enthusiast Justin Trudeau had to smear it:

Canadian Prime Minister Justin Trudeau said participants of the protest are a “small fringe minority who are on the way to Ottawa who are holding unacceptable views.””What we are hearing from some people associated with this convoy is completely unacceptable,” he continued.

Video of this noisome ponce here.

What he’s referring to are these DMs from a single trucker who called a black reporter “slaveblooded” and said that people who oppose the convoy — “traitors” — would “swing.”

So, based on a pair of DMs from one guy, Trudeau (and the CBC itself) slanders a mass political movement.

I enjoyed Conservative party member Pierre Poilievre’s deft rebuttal to the CBC about this attempt to smear the convoy, noting the left, and only the left, always employs the tactic of smearing huge groups of people based on one or two people’s statements or actions.

He also notes that the CBC itself has been accused of racial bias; maybe they all should be similarly thought guilty of racial bias? By the way, automaker Stellantis had announced a vaccine mandate, then delayed it until January, but now is scrapping the mandate. The pushback seems to be working.

Obviously, this position has been a complete catastrophe and must be renounced, denounced, and reversed 180 degrees. We can no longer be the party who supports businesses no matter what they do, including denigrating and discriminating against conservatives.

We tried to be good friends and protectors to businesses and impose no demands on businesses, while the left demanded they throw us under the bus. So businesses repaid our kindness by deciding the path of least resistance was to drive right the fuck over us.

We went from “Don’t Tread on Me” to “Please Use Me As Your Doormat and Toilet Paper.”

https://thepostmillennial.com/old-trudeau-tweet-tells-canadians-to-thankatrucker
This is no longer about the jab this is about total freedom from a dead pandemic and its closure of schools, churches businesses, all of it.
Let our kids grow up normal, free them from big pharma’s very profitable chains.
Burn all the vax reward cards and masks on the steps of the health dept., open your businesses mandates are not laws.

They have shown us he way the Canadian P.M. HAS turned Chicken and has run away to hide in the Closet

RMCP report 130,000 trucks in the city and 20,000 parked in fields outside the city.
The masked Parka guy with the confederate flag has been run off by the real protestors.
Churches in Ottawa feeding the truckers allowing them to warm and sleep.
Shifts have been organized. More cavalry on the way
Sweet Grass border Montana. Convoy backed up for fifty miles into US. This is why in addition to the democrat party, the media is also the enemy of the American people.

MSNBC, like the rest of the Democrat party, is severely out of touch with reality.

OTTAWA—A “freedom convoy” of Canadian truckers is on its way to Ottawa in protest of vaccine mandates. Prime Minister Justin Trudeau is pushing back at accusations of tyrannical government overreach by claiming the truckers just hate him because he’s black.
“As a proud black man, this is the kind of discrimination I have faced my whole life,” said Trudeau in a nationwide address over Zoom. “These truckers are a bunch of racist white men. They’re probably not even gay.”
“They only hate me because I’m black!”
Trudeau, who is currently quarantining in spite of a negative COVID-19 test, also sent off dozens of angry letters to “whoever hires truckers” because of all the racism. While literally shaking, he wrote, “If you oppose vaccines you are racist, sexist, and think a Snow White remake is a good idea.”
His intern passed the letters on to Canadian Mounties who rode to the four corners of Canada to take the message to the people.
Trudeau, who is suspiciously not black looking, was offended when members attempted to spin his statement, suggesting he was merely close to the black community.
“I am not speaking metaphorically,” said Trudeau. “Look at my skin. It’s as black as night. It’s midnight black!”
“If you weren’t so naively color blind you’d understand,” he added.
At publishing time, President Biden lent his support to Trudeau, calling him a ‘surprisingly articulate black fella’.

Following its own inspection, which occurred from Jan. 31 to...