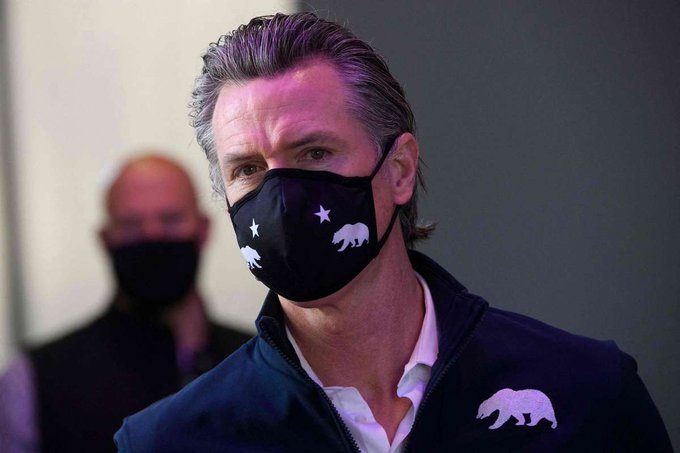 Perhaps no state better exemplifies the stupidity and futility of COVID policy better than California.

Few people on earth have pretended to follow The Science™ more closely than Gavin Newsom and his top health officials. Their desperation to maintain an illusion of control has caused untold suffering and led to a mass migration out of the state and a collapse in the number of people moving into the state.

What used to be a haven for invention, positive outlook and technological progress has turned into a dystopian wasteland reorganized solely around failing to prevent the spread of COVID-19.

Now, state and local officials are quietly and tacitly acknowledging their policies don’t actually work by pushing new ones and also by disgracefully targeting school children with N95’s — masks specifically not recommended by the FDA for usage by children.

But the collapse of California should mark the end of so many COVID narratives; fully and completely destroying any possible justification for further mandates.

Unfortunately, politicians like Newsom are so committed to following the destructive, useless guidance of incompetent experts that it feels impossible that the state will ever end their “state of emergency.”

But in a sane world, the media and the general public would be holding them to account for their unequivocal failure. And this article explains why.

That was Gavin Newsom’s response to a New York Times article criticizing the G.O.P.’s fight for personal freedom and defense of scientific evidence, which is overwhelmingly in favor of ending mask and vaccine mandates.

Newsom is an endless consumer of vast quantities of misinformation from delusional, incompetent bureaucrats like Dr. Anthony Fauci:

Back in May, Fauci said if 70% of adults got at least one dose, the risk of a surge this winter would be “extraordinarily low”

In December 2020 when Newsom made the indefensible decision to lock the state down again after his original mask mandate failed, it was revealed that Fauci consulted with state officials and said the state had “no choice” despite following all of his advice and seeing it utterly deteriorate. So it ought to come as no surprise that Newsom believed additional misinformation from Fauci and others that mask and vaccine mandates would lead to positive COVID outcomes.

Unfortunately, misinformation has become something of “new normal” in California.

Just a few months ago, in August 2021, Newsom made the truly absurd claim that COVID could be over in a month if everyone followed his advice:

“If we want to end this pandemic and disease, we can do it in a month,” Newsom said at an Oakland elementary school this week, echoing remarks he’d made the week before in San Bernardino.

But this dangerous lie and Newsom’s sarcastic criticism of the push to end mask and vaccine mandates have been curiously ignored by the national and local media as winter’s taken over the state. I wonder why!

Cases are up 2,165% since Newsom laughed off freedom and chuckled at his own brilliance in pushing for mask and vaccine mandates.

They’re up 1,774% since he reinstated the mask mandate that had already failed to prevent a huge surge last fall and winter.

Astonishingly, cases have more than doubled in only five days since his incompetent health officials extended the mask mandate for another month.

The mask mandates, the vaccine mandates. None of it is working to prevent the spread of COVID-19 in California.

Has anyone in the media asked if he regrets making those snide comments about mask and vaccine mandates only to see them fail spectacularly in his state?

Why has no one criticized him for the unbelievable disinformation that COVID was “now a choice” based on vaccination status?

Has anyone asked him who advised him that the vaccines would prevent someone from being infected with COVID?

According to the CDC, 84.2% of the population of California has been at least partially vaccinated, 90% of everyone over 5. Every other metric has maxed out at the CDC capped 95%. We can see how well that’s worked to prevent cases:

Are we still pretending that this “disease is a choice” and we can end the pandemic in a month if people get vaccinated?

They DID get vaccinated. At incredibly high rates. The overwhelming majority of everyone even remotely at risk have been vaccinated. The vast majority of the state’s population is vaccinated to some degree. The Governor followed The Science™ and espoused the politically correctly ideology that the G.O.P.’s push to ban mask and vaccine mandates was dangerous, anti-science fringe lunacy. How could this happen?

But those are just cases, what about hospitalizations, certainly those must have been prevented by Gavin’s mandates, right?!

Nope. Hospitalizations are the highest they’ve been since the first time the CDC’s vaccination rate data goes above 0%. They’ve nearly doubled in only nine days. At that rate, they will fly past the all time high by late next week.

But that’s just looking at the total population, what about those at significant risk — seniors? Well they’ve maxed out on those with at least one dose:

In fact, that dip shows the rate at >99% in December before the CDC made the decision to cap rates at 95%.

What’s even more impressive is that 52% of those over fifty who are vaccinated have also received a booster shot. Even that hasn’t stopped hospitalizations from doubling in nine days.

Californians have overwhelming complied with Newsom’s directives — they obviously believed his misinformation. It hasn’t worked.

Every single one of the counties where hospitalizations are growing the fastest have a higher than average vaccination rate:

Can anyone look at those graphics and still claim mRNA vaccines do a damn thing to help?
And same with masking.
One thing Fauci didn’t lie about, one time, was that non-medical personnel don’t handle masking correctly, and therefore why bother?
Yet, here we are, masking by mandate.

Nan
My mom was in the hospital for a few days as they monitored an extremely rapid kidney failure (after she was Vaxxed) 1 vistor allowed per day so I stayed all day for several days. The medical people are always touching their masks. Another thing I took note of is they do not note important things on charts. My mom at 92 is perfectly ambulatory. A young male nurse arrived when she rang cause she had to relieve herself ( both her chair and bed were on alarms)came in and grabbed one of those belts. I told him to hang it back up, she was already closing the door to the bathroom. Then I had to read the young man the riot act as when she flushed he opened the bathroom door on her. A Catholic hospital, I told him to go talk to the Mother and ask if his actions were proper. All the young man could do is stammer as he backed out of the room.

If you like failure, you love being a Democrat. Democrats don’t just fail, they excel at it because that’s where all their policies lead and they don’t have the courage to admit failure and reform.

That’s why so much fraud and baseless accusations are required to prop them up.