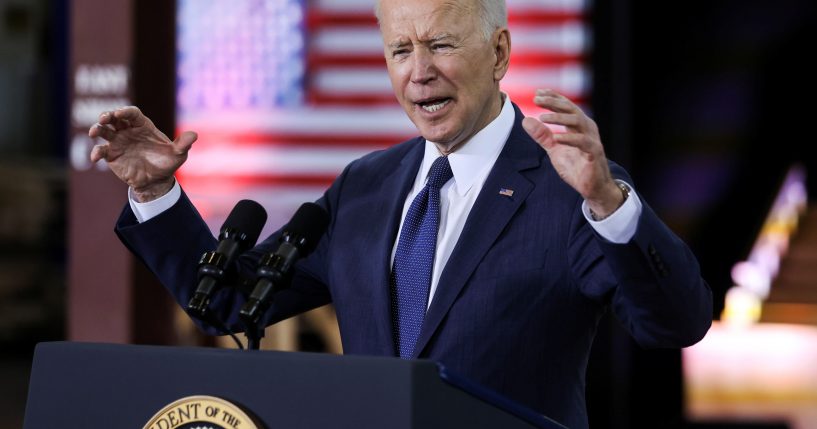 Ignoring the obvious reason for the sharp rise in crime — the “defund the police” movement that spread throughout the country in the aftermath of George Floyd’s death — the two insisted it is the flow of illegal firearms into the cities that’s responsible for the spike.

To that end, the Department of Justice announced in a Tuesday news release it will be establishing “five cross-jurisdictional firearms trafficking strike forces” so it can “crack down on sources of crime guns.” These task forces will be operational within the next 30 days.

Administration officials believe “stemming the supply of illegally trafficked firearms” will result in a reduction of the crime rate.

“Our firearms trafficking strike forces will investigate and disrupt the networks that channel crime guns into our communities with tragic consequences. This effort reflects our shared commitment to keep communities safe,” Garland said in the release.

According to the DOJ, “the five strike forces will focus on significant firearms trafficking corridors that channel guns into New York, Chicago, Los Angeles, the San Francisco Bay Area and Washington, D.C. They will be led by designated U.S. Attorneys who will coordinate with the Bureau of Alcohol, Tobacco, Firearms, and Explosives (ATF) and with state and local law enforcement partners in places where firearms originate and where they are used to commit crimes.”

Garland delivered remarks at a White House news conference on Wednesday. He cited steps the DOJ has taken to reduce gun violence, including the proposed rule “to help address the proliferation of ghost guns.”

The Department issued another proposed rule in early June to place pistols that use certain stabilizing braces into the same category as easily concealable short-barreled rifles, Garland said.

But Democrats have initiated bans on so-called “assault weapons” and pistol restrictions in the past. These efforts have led only to the disarming of law-abiding citizens while leaving firepower in the hands of criminals. This leads to a huge inequity that only causes more death in cities.

The Bureau of Alcohol, Tobacco, Firearms and Explosives, Garland continued, will work to revoke the licenses of firearms dealers that willfully break the law. The administration has included funding in the 2022 budget to put inspectors in every ATF field office.

In his remarks, which followed Garland’s, Biden called firearms dealers that break the law “merchants of death.” He added that “we’re going to crack down on those gun dealers and the violent criminals they knowingly arm.”

The crime problem will not be solved by these misguided initiatives because they are aimed at the wrong people. It’s not the firearms dealers who are responsible for the crime now engulfing our inner cities. The gang members and the real criminals will find a way to obtain guns. They always do.

What will the Biden administration do about the cartel and gang members who have poured into the country alongside hundreds of thousands of illegal immigrants as a result of the administration’s foolish immigration policies?

Sure would like to see that study, especially since the idiot Biden lied numerous times, including claiming gun ownership was restricted from the very time the 2nd Amendment was ratified. So, I would believe in the existence of such a study when I see it.

For instance, how many guns that had been purchased from a dealer found at a crime scene had been stolen from the original owner? If the excuse cities use to justify their extreme gun control measures is that the guns come from outside the city but crime is still EXPLODING, then doesn’t that prove their gun control measures serve no purpose?

And that stupid idiot had some nerve (or incompetence or lack of awareness…) to bring up the importance of background checks. What if everyone just LIED on their federal background check application like his coked-up, whore mongering son did? Wouldn’t that pretty much render the background checks useless? Like idiot Biden himself?

Maybe he could add just ONE MORE “task force” to address the actual problem, the refusal of Democrat-led cities to enforce laws and prosecute criminals?