As the Insurrection Narrative Crumbles, Democrats Cling to it More Desperately Than Ever 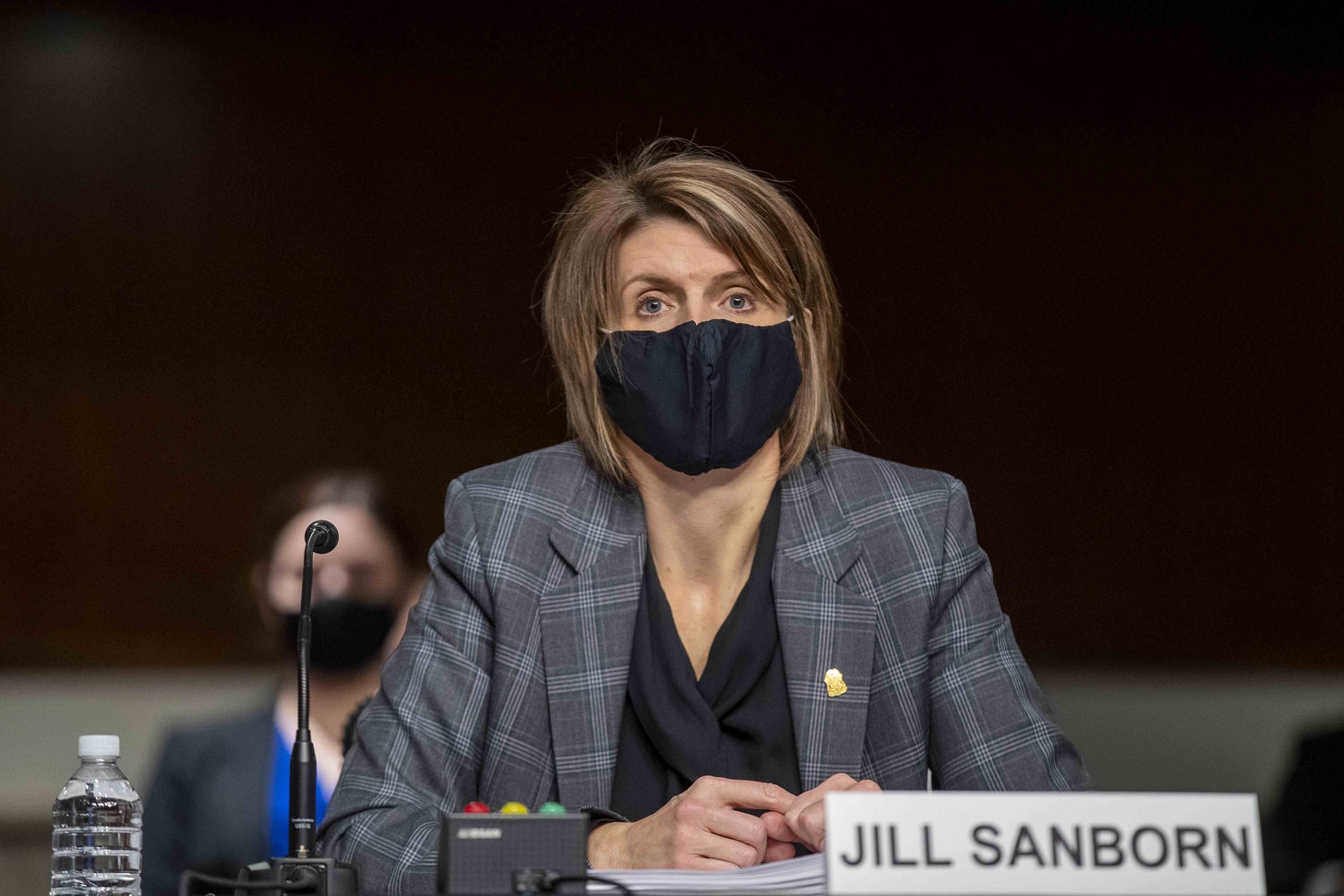 Twice in the last six weeks, warnings were issued about imminent, grave threats to public safety posed by the same type of right-wing extremists who rioted at the Capitol on January 6. And both times, these warnings ushered in severe security measures only to prove utterly baseless.

First we had the hysteria over the violence we were told was likely to occur at numerous state capitols on Inauguration Day. “Law enforcement and state officials are on high alert for potentially violent protests in the lead-up to Inauguration Day, with some state capitols boarded up and others temporarily closed ahead of Wednesday’s ceremony,” announced CNN. In an even scarier formulation, NPR intoned that “the FBI is warning of protests and potential violence in all 50 state capitals ahead of President-elect Joe Biden’s inauguration.”

The resulting clampdowns were as extreme as the dire warnings. Washington, D.C. was militarized more than at any point since the 9/11 attack. The military was highly visible on the streets. And, described The Washington Post, “state capitols nationwide locked down, with windows boarded up, National Guard troops deployed and states of emergency preemptively declared as authorities braced for potential violence Sunday mimicking the Jan. 6 attack on the U.S. Capitol by a mob of pro-Trump rioters.” All of this, said the paper, “reflected the anxious state of the country ahead of planned demonstrations.”

But none of that happened — not even close. The Washington Post acknowledged three weeks later:

Despite warnings of violent plots around Inauguration Day, only a smattering of right-wing protesters appeared at the nation’s statehouses. In Tallahassee, just five armed men wearing the garb of the boogaloo movement — a loose collection of anti-government groups that say the country is heading for civil war — showed up. Police and National Guard personnel mostly ignored them.

All over the country it was the same story. “But at the moment that Biden was taking the oath of office in Washington, the total number of protesters on the Capitol grounds in Topeka stood at five — two men supporting Trump and two men and a boy ridin’ with Biden,” reported The Wichita Eagle (“With Kansas Capitol in lockdown mode, Inauguration Day protest fizzles). “The protests fizzled out after not many people showed up,” reported the local Florida affiliate in Tallahassee. “The large security efforts dwarfed the protests that materialized by Wednesday evening,” said CNN, as “state capitols and other cities remained largely calm.”

Indeed, the only politically-motivated violence on Inauguration Day was carried out by Antifa and anarchist groups in Portland and Seattle, which caused some minor property damage as part of anti-Biden protests while they “scuffled with police.” CNN, which spent a full week excitedly hyping the likely violence coming to state capitols by right-wing Trump supporters, was forced to acknowledge in its article about their non-existence that “one exception was Portland, where left-wing protesters damaged the Democratic Party of Oregon building during one of several planned demonstrations.”

Completely undeterred by that debacle, Democrats and their media spokespeople returned with a new set of frightening warnings for this week. The date of March 4 has taken on a virtually religious significance for the Q-Anon movement, announced NBC News’ Ben Collins, who was heard on NPR on Thursday speaking through actual, literal journalistic tears as he recounted all the times he called Facebook to plead with them to remove dangerous right-wing extremists on their platform (tears commence at roughly 7:00 mark). Valiantly holding back full-on sobbing, Collins explained that he proved to be so right but it pains and sorrows him to admit this. With his self-proclaimed oracle status fully in place, he prophesized that March 4 had taken on special dangers because Q-Anon followers concluded that this is when Trump would be inaugurated.

This is how apocalyptic cult leaders always function. When the end of the world did not materialize on January 6, Collins insisted that January 20 was the day of the violent reckoning. When nothing happened on that day, he moved the Doomsday Date to March 4. The flock cannot remain in a state of confusion for too long about why the world has not ended as promised by the prophet, so a new date must quickly be provided with an explanation for why this is serious business this time.

This March 4 paranoia was not confined to NBC’s resident millennial hall monitor and censorship advocate. On March 3, The New York Times warned that “the Capitol Police force is preparing for another assault on the Capitol building on Thursday after obtaining intelligence of a potential plot by a militia group.” All this, said the Paper of Record, because “intelligence analysts had spent weeks tracking online chatter by some QAnon adherents who have latched on to March 4 — the original inauguration date set in the Constitution — as the day Donald J. Trump would be restored to the presidency and renew his crusade against America’s enemies.”

These dire warnings also, quite predictably, generated serious reactions. “House leaders on Wednesday abruptly moved a vote on policing legislation from Thursday to Wednesday night, so lawmakers could leave town,” said the Times. We learned that there would be further militarization of the Capitol and troop deployment in Washington indefinitely due to so-called “chatter.” NPR announced: “The House of Representatives has canceled its Thursday session after the U.S. Capitol Police said it is aware of a threat by an identified militia group to breach the Capitol complex that day.”

Do you know what happened on March 4 when it came to violence from right-wing extremists? The same thing that happened on January 20: absolutely nothing. There were no attempted attacks on the Capitol, state capitols, or any other government institution. There was violent crime registered that day in Washington D.C. but none of it was political violence by those whom media outlets warned posed such a grave danger that Congress has to be closed and militarization of Washington extended indefinitely.

Perhaps the most significant blow to the maximalist insurrection/coup narrative took place inside the Senate on Thursday. Ever since January 6, those who were not referring to the riot as a “coup attempt” — as though the hundreds of protesters intended to overthrow the most powerful and militarized government in history — were required to refer to it instead as an “armed insurrection.”

This formulation was crucial not only for maximizing fear levels about the Democrats’ adversaries but also, as I’ve documented previously, because declaring an “armed insurrection” empowers the state with virtually unlimited powers to act against the citizenry. Over and over, leading Democrats and their media allies repeated this phrase like some hypnotic mantra:

But this was completely false. As I detailed several weeks ago, so many of the most harrowing and widespread media claims about the January 6 riot proved to be total fabrications. A pro-Trump mob did not bash Office Brian Sicknick’s skull in with a fire extinguisher. No protester brought zip-ties with them as some premeditated plot to kidnap members of Congress (two rioters found them on a table inside). There’s no evidence anyone intended to assassinate Mike Pence, Mitt Romney or anyone else.

Yet the maximalist narrative of an attempted coup or armed insurrection is so crucial to Democrats — regardless of whether it is true — that pointing out these facts deeply infuriates them. A television clip of mine from last week went viral among furious liberals calling me a fascism supporter even though it did nothing but point out the indisputable facts that other than Brian Sicknick, whose cause of death remains unknown, the only people who died at the Capitol riot were Trump supporters, and that there are no known cases of the rioters deliberately killing anyone

(Two FBI operatives have since anonymously leaked that it is looking at a “suspect” who may have engaged with Sicknick in a way that ultimately contributed to his death. But nothing still is known; Sicknick’s mother claims he died of a stroke while his brother says it was from pepper spray; and all of this is worlds away from the endlessly repeated media claim that a bloodthirsty pro-Trump mob savagely bashed his head in with a fire extinguisher.)

What we know for sure is that no Trump supporter fired any weapon inside the Capitol and that the FBI seized a grand total of zero firearms from those it arrested that day — a rather odd state of affairs for an “armed insurrection,” to put that mildly. In questioning from Sen. Ron Johnson (R-WI) on Thursday’s hearing, a senior FBI official, Jill Sanborn, acknowledged this key fact:

(The “one lady” who died referred to by this FBI official was Ashli Babbitt, an unarmed Trump supporter who was killed when she was shot point blank in the neck inside the Capitol on January 6 by an armed Capitol Police Officer).

The key point to emphasize here is that threats and dangers are not binary: they either exist or they are fully illusory. They reside on a spectrum. To insist that they be discussed rationally, soberly and truthfully is not to deny the existence of the threat itself. One can demand a rational and fact-based understanding of the magnitude of the threat revealed by the January 6 riot without denying that there is any danger at all.

Those who denounced the excesses of McCarthyism were not insisting that there were no Communists in government; those denouncing the excesses of the Clinton administration’s attempts to seize more surveillance power after the Oklahoma City courting bombing were not denying that some anti-government militias may do violence again; those who objected to the protracted and unhinged assault on civil liberties by the Bush/Cheney and Obama administrations after 9/11 were not arguing that there were no Muslim extremists intent on committing violence.

The argument then, and the argument now, is that the threat was being deliberately inflated and exaggerated, and fears stoked and exploited, both for political gain and to justify the placement of more and more powers in the hands of the state in the name of stopping these threats. That is the core formula of authoritarianism — to place the population in a state of such acute fear that it acquiesces to any assertion of power which security state agencies and politicians demand and which they insist are necessary to keep everyone safe.