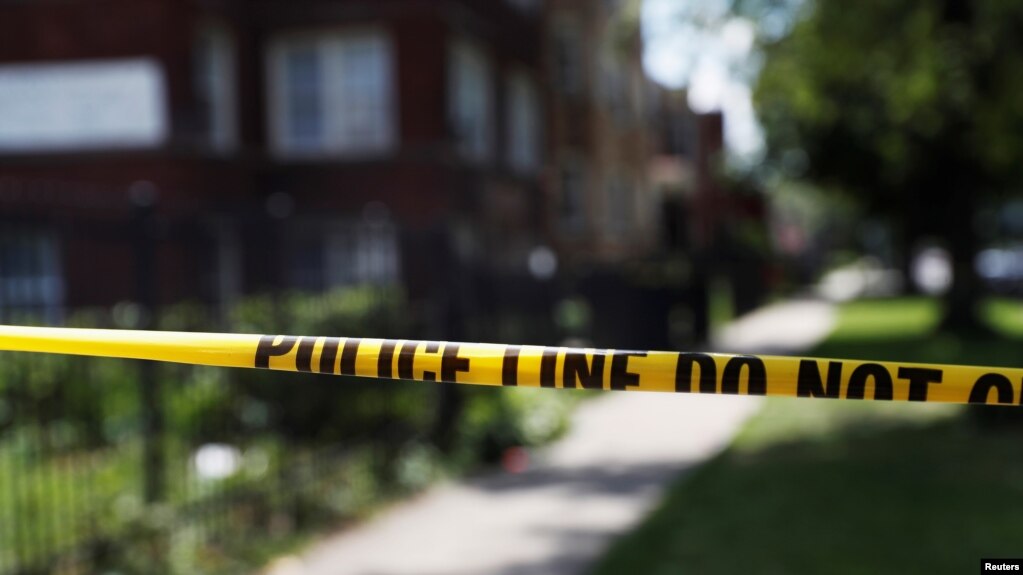 We’ve been asking a lot of questions about Biden’s felonious handling of top secret documents. Today we get some answers. When Biden’s lawyer found the documents he contacted the DOJ.

President Biden’s personal attorney who discovered a batch of classified materials at the DC think tank that bears Biden’s name has spoken with federal investigators probing the case, according to a report.

Patrick Moore, the lawyer the 80-year-old president tasked with cleaning out his former office at the Penn Biden Center last November, reportedly met with US Attorney John Lausch’s team after finding some 10 highly sensitive documents, according to CNN.

The interview came during the Justice Department’s initial phases of the investigation into Biden’s handling of classified documents, the news outlet said on Tuesday.

Of course, this being a democrat President, the DOJ did not even make this a formal effort

CNN also reported that the interview with Moore conducted by Lausch’s office was informal and not written up on an official form used by government offices to summarize formal interviews, known as a “302” form.

Former FBI Assistant Director Chris Swecker had some harsh criticisms of the way this has been handled, along with the glaringly obvious double standard between Biden and Trump.

“likely witnesses in a criminal investigation” over whether the commander-in-chief or others in his circle mishandled classified documents,

The FBI should have raided this and the other locations where the stolen documents were found and treated them like crime scenes complete with DNA gathering and dusting for fingerprints. But alas, no. Merrick Garland gave Biden’s lawyers the green light to sanitize the crime scene

The Justice Department decided against having FBI agents watch over a search for classified documents conducted by President Biden’s lawyers at his Delaware homes — in part because the attorneys were deemed to be cooperating with the DOJ’s investigation, according to a report.

The Wall Street Journal reported Tuesday that DOJ officials also opted for the hands-off approach in order to avoid complicating future phases of the probe and to not interfere with special counsel Robert Hur’s work.

According to the Journal, Biden’s attorneys were given permission by the Justice Department to search the 80-year-old president’s Wilmington and Rehoboth Beach residences for sensitive documents and notify the department if any were found so that law enforcement could take custody of them.

In an entertaining move, the White House, which used to claim that Biden’s Wilmington home was used for work

“I will note that, while every president can work from anywhere they are because that is how presidencies are equipped, he is traveling to Delaware for the memorial service of a family member. And he will be — that is why he’s traveling there this weekend,” Psaki said.

is now claiming that the residence is “personal.” This is being done, of course, to dodge the issue of a lack of visitor logs but it then incriminates Biden further as taking top secret documents to his unsecure personal residence.

Another of the questions we asked was “Who had access to those documents?” Here’s a good idea 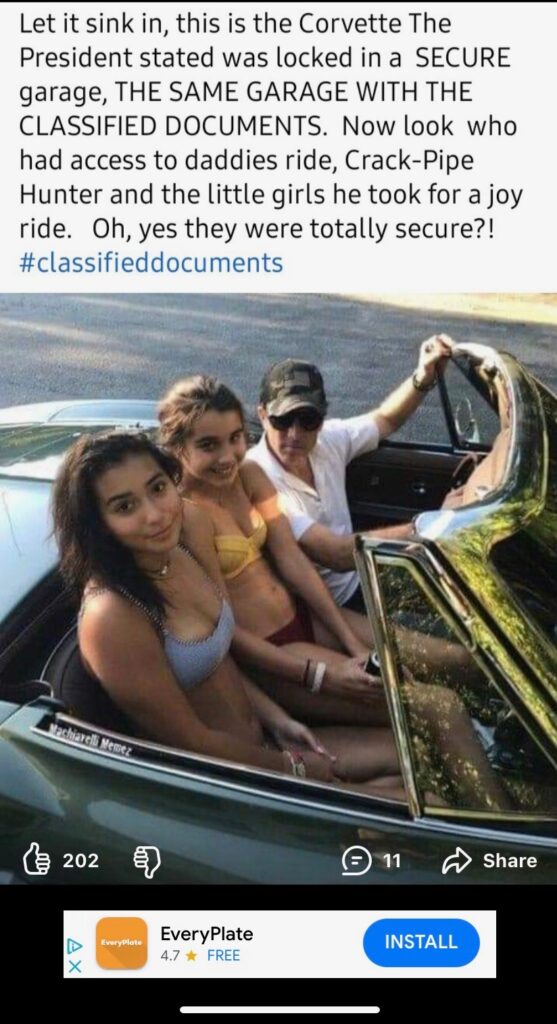 Those little girls are Bidens. I believe that’s Ashley and Natalie. Hunter has never had compunctions about minor girls.

This incident reeks of hypocrisy between the way Trump was treated and the way Biden is being treated. Jonathan Turley again:

Given the opportunity to search President Joe Biden’s office and residences, the Department of Justice declined to do so, The Wall Street Journal reports. Instead, it allowed potentially uncleared and unnamed private counsel to search for classified material after the discovery of the highly classified documents in the Penn Biden Center office. It was a decision that could benefit Biden greatly, but at a considerable cost to the department itself.

If true, the decision raises additional questions over the independence of top law enforcement personnel. This follows a litany of controversies involving both Donald Trump and Biden where the FBI and DOJ have been accused of political bias and unequal treatment. While the FBI recently denounced critics as “conspiracy theorists,” the record of inexplicable decisions continues to grow by the day.

This is patently obvious

There is no plausible reason why, given the chance, the Justice Department would not want to conduct a national security search itself. After Nov. 2, the Justice Department was aware that material at the top secret or higher levels was discovered in a closet in the Penn Biden Center. It was also aware that the material may have been moved over the course of six years and that other material could be in other unsecured locations. Nevertheless, it reportedly opted to allow uncleared attorneys to search for additional classified material under a type of “look but please don’t read” edict.

As someone who has worked with classified evidence at the TS/SCI level since the Reagan administration, the decision is breathtaking. It effectively replaced well-established national security protocols with an honor system to be followed by persons unknown.

The decision undermines the credibility of the Justice Department in both the Biden and Trump investigations. The department is threatening criminal charges over the mishandling of classified material but opted for a grossly negligent approach itself in the search for additional classified documents. It just rolled the dice and lost. Additional documents were found by the uncleared lawyers. However, the Justice Department continued to defer to Biden’s counsel like a mere pedestrian at a potential crime scene.

The DOJ is a fully operational arm of Biden Inc.

It’s a little funny when you think about it. Hillary kept classified material in a toilet. Biden kept them in a garage.

Biden has a leaden touch. Everything he touches becomes corrupt. His entire life has been one of a corrupt grifter. One can only hope that the House Oversight panel digs into this and exposes Biden and his criminally dirty family for the world to see.

As corrupt as the Federal Gov’t is from Joey down, I don’t expect a true exposure of the documents. They will be sanitized to the point of meaningless. No FBI raids, nothing.

Once they are revealed, they will all be about “weddings, funerals and yoga” or, in idiot Biden’s case, frozen yogurt instead of yoga.

How does a personal lawyer qualify to handle the most sensitive and highly classified documents in the federal government?

They don’t, but when the government is totally corrupt, it doesn’t matter.

The lawyer was questioned , no 302, this is a skate party like Clinton.

COVER UP: National Archives Tells Rep. Comer It Has to Consult with the Justice Department Before Sharing Biden Document Info with Congress

Is the Archives saying those documents were, and still are, THAT sensitive and idiot Biden had them laying around in an office and closet?

Idiot Biden’s attorneys are “cooperating” with the DOJ because they both have the same goal: bury all evidence of idiot Biden’s stupidity and corruption. Yeah, a mouthpiece for idiot Biden can do that just as well as an FBI agent, so why send an agent?

Compare this also to the FBI’s approach to General Flynn. Their entire goal was not to clear up any issues or identify a problem, it was to catch the General lying and to do that, they trapped him with detailed questions about a call they had a recording of but he relied on his memory of, which was still largely accurate. But in the idiot Biden case, it is “ask them no questions and they’ll tell us no lies and even if they do, we aren’t writing them down.”

The picture here is clear; while the deep state tried relentlessly to find some misstep, no matter how minor, with which to hang Trump, they are bending over backwards, just as they did with Hillary, to provide every avenue of escape from accountability for the laws they break.

There is no plausible reason why, given the chance, the Justice Department would not want to conduct a national security search itself.

It’s simple, really. They, like idiot Biden and Hillary, don’t give a shit about national security. They care about maintaining and protecting the deep state and controlling government.

If I had misplaced a TSSCI document in my 40 year military/Federal Service, I would be writing this post from Leavenworth, KS

Why are they allowing the search by private attorneys, and take their word on how many documents the insanity is astounding.

Part of the reason there are no visitor logs is so we don’t find out about the types and numbers of doctor visits. Start by impeaching Garland and then move on to “the big guy”.

Recall how Sandy Berger stuffed Top Secret documents into his socks to sneak them out for the Clintons?
well, joe did a similar thing with these documents according to what’s been found and admitted to already:
He created an envelope big enough to smuggle documents out in and hand wrote the word, “Personal,” on it.
It has been found at one of the sites of the papers, either the home, garage or office.
The Chinese were indeed paying for access, not to joe personally, but to papers joe could get home for them that they could copy.
Apparently this was worth about $50,000 a month.
China watchers could probably backtrack China’s policies and threats and killings of spies to what joe took to them.
Do we have honest and willing deep researchers into China watching anymore?
All the switching out one set of papers for another, more innocuous set, won’t erase what China has acted upon knowing over these recent years.
joe’s law team might just get themselves into very hot water, if we had an honest DOJ.