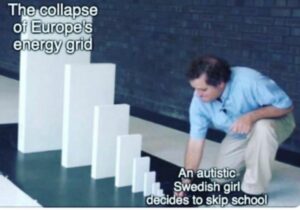 Welcome back! I realized this week that somewhere around my summer break I stopped opening these posts noting the grim milestone of which day of the Biden* regime we are into. So as of today, we mark Day 647 of America held hostage. Now onto the crazy:

More of this to come.

And so it begins

I wish this Gen X rejection of The Radical Left were as widespread as the article implies. I’ve seen too many old friends who went from Angry (and blaming us Normals) when Obama turned out to be more cheap politician than the Messiah they were promised, Furious when President Trump denied Hillary’s coronation, and off the rails livid when we wouldn’t let them gaslight us to acknowledge the “legitimacy” of installing a dementia patient over a stolen election. But for me personally, this post nails it.

How about something positive?

10/21 – Journolism: ignoring the “Five Ws + H” in reporting due to political correctness

10/22 – Scientists Glue Themselves to Floor to Protest Car Emissions

I’ve already told Sister babe that if the Climastrologists try this crap at one of DC’s art museums, I’ll be paying them a visit. The night before will involve a lot of beer, and the drive over to visit will involve a nice big Arbys lunch. She knows I’m not kidding.

Projection is more than a rive rin Egypt.

10/24 – MSNBC Reporter Asks Trump Supporters Stupid Question About Jan 6, Gets Humiliated on National TV – Has No Idea About What Really Happened that Day

If you haven’t seen this one yet, watching a group of Normals calmly school this partisan hack is a thing of beauty.

10/25 – Just Like In Communist Countries, The State Is Turning Your Children Against You

Not really a surprise – they know how to follow a playbook

Sad news, Malkin was one of the first columnists I’d read when I got interested in following politics. She will be missed.

If you want to make your blood pressure rise be sure to read to the end.

Amen to this. As someone who used to roam the National Mall regularly, do we really need more museums along it?

Have a great weekend, and Happy Halloween!

He is to coherence what you are to intern management. https://t.co/zg57Ofcci2

I would also like to reassure those who are Tik Tok disco-dying and throwing soup on Van Goghs and gluing yourselves to things: you’re doing great and changing minds, and absolutely no one is remotely sick of your shit

Rip Jerry lee Lewis , another one for Rock n Roll heaven.
There will be a whole lot of shakin’ going on.

10/27/22 – ‘We’re going to hang you’: DOJ cracks down on threats to election workers ahead of high-stakes midterms

10/27/22 – Armed ‘vigilantes’ and conspiracy theorists threaten to disrupt midterm elections: ‘We are watching’

10/26/22 – ‘We Will Find You’: Election Officials in Arizona Are Receiving Threats Before the Midterms

07/08/22 – Facing harassment and death threats, some election workers weigh whether to stay

Of course he wasn’t:

Suspect in attack on Nancy Pelosi’s husband posted memes, transphobic images and conspiracy theories on Facebook about Covid-19 vaccines, plus multiple videos produced by My Pillow CEO Mike Lindell falsely alleging that the 2020 election was stolen.

The Left is violent. The Right is not.

We know you losers are already poised to J6th-style accuse Republicans of doing what Democrats are doing: rigging elections.

THE 2020 ELECTION WAS RIGGED AND STOLEN.

Everyone knows. We’ll be ready this time.

WE know many on the right are delusional, prone to projection, have anger management issues, flaunt firearms, and are increasingly prone to political violence. It doesn’t really matter that they wave a flag with one hand and hold a bible in the other. That’s just camouflage. There’s no more understanding that the Constitution is about individual liberty than there is of the words of Jesus. They think Trump is a patriot, and televangelists with private jets and gigantic mansions are Christians

There was NO rigged election. There’s ZERO evidence that there was. Trump was soundly REJECTED by a record margin of American voters, and that rejection has made him even crazier. He’s the abusive boyfriend with an infantile fixation on the one who rejected him, determined to get her back an mete out punishment. I’m not sure whether he belongs in a prison or padded cell, but he sure as hell doesn’t belong in the White House.

You constantly confirm your idiocy

Not so delusional as to think student loans passed by a couple of votes, anger management sorta like shooting someone going door to door because they are pro life? Political violence summer of love 2 billion in damage, camouflage… putting on a maga hat before filming Ashley Babbits murder and getting off with zero charges 70,00 bucks richer.
The bigotry seethes as he rolls every republican voter into one pile, demonizes the guy that had us energy independent with very little inflation.
I agree the knot head that breaks into another persons home is a lunatic, but where are the firearms in this episode how many rounds did the assault hammer have?
Your post was perfect for TWIRL, showing how unhinged some on the left can be.

from the ny post: A local website published a photo of a man named David Depape in December 2013 in which he was described as a friend of a “nudity activist” planning a naked wedding in Berkley, Calif.

No doubt the FBI worked overtime to get the online posts up. There is no way this fruitcake is a MAGA conservative.

Last year, David DePape posted links on his Facebook page to multiple videos produced by My Pillow CEO Mike Lindell falsely alleging that the 2020 election was stolen. Other posts included transphobic images and linked to websites claiming Covid vaccines were deadly. “The death rates being promoted are what ever ‘THEY’ want to be promoted as the death rate,” one post read.

He also posted content about the “Great Reset”– the sprawling conspiracy theory that global elites are using coronavirus to usher in a new world order in which they gain more power and oppress the masses. And he complained that politicians making promises to try to win votes “are offering you bribes in exchange for your further enslavement.”

Maybe you should check here to see if any of the regulars are suddenly missing.

The Speaker of the House is number three in line for the presidency.

It is preposterous that some random could just break into her private home.

There’s a lot more to the story, and you’re being told a lot of lies.

The Dems and Progressives SO WANTED IT TO BE TRUE that Paul Pelosi was attacked by some Trump supporter.

Now there will be hundreds of tweets either 1) deleted or 2) ratio'd to death because they aged only about 15 minutes before going bad.

How come 82-year-old Paul Pelosi also had a hammer in his hand while he was being assaulted by a 42-year-old guy with a hammer?

Same people who laughed at Ron Paul and the Rubio attacker for getting attacked now want your undivided attention about Paul Pelosi.

The hypocrisy is worth noting. Don’t celebrate your political opponents getting attacked. It’s not hard.

And referring to Rand Paul’s attack, Christine Pelosi said this:

Odd, you seem to have forgotten that.

They both had hammers sounds like a lovers spat.

No one deserves to be assaulted. Unlike Nancy Pelosi’s daughter who celebrated my assault, I condemn this attack and wish Mr. Pelosi a speedy recovery. https://t.co/2LxIlbIYQP

The press is trash https://t.co/JAl8MSF03q

Don’t you have a better source tha a leftwing nutjob conspiracy theory site?