Why is this hurricane even happening? Didn’t we make the biggest investment in climate change in the history of the world? 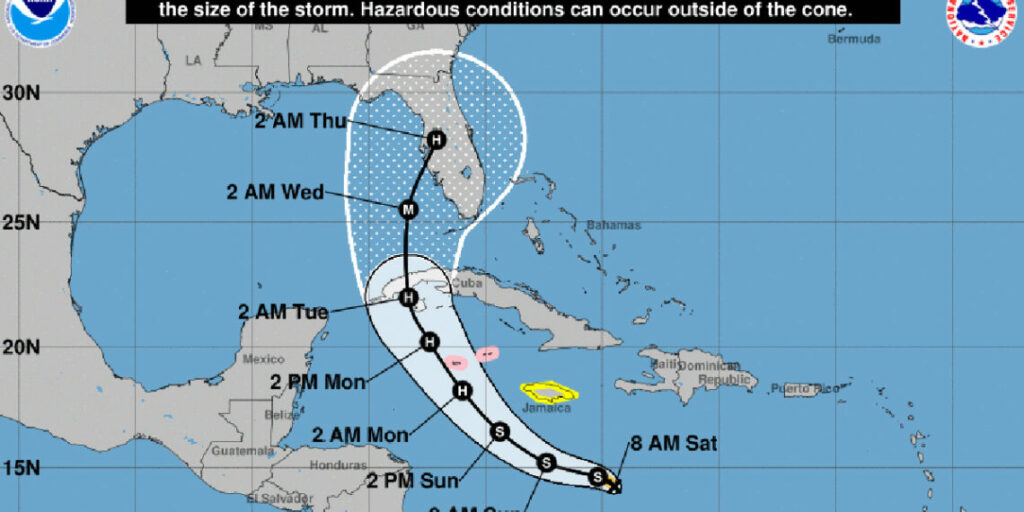 What’s with this hurricane? Why didn’t it turn away from the US? Doesn’t it know we passed the biggest investment in climate change in history? Golly, Sen. Amy Klobuchar said democrats could stop hurricanes!

Nancy Pelosi said that she already saved the planet!

Nancy Pelosi:” And we saved the planet, we’re saving the planet…” 🤣🤣🤣🤡🤡💩💩 pic.twitter.com/xM7htAbqau

The empty-headed Cabbage Patch doll known as Karine Jean-Pierre also said that “What may happen in this hurricane season” will be “helped” by Biden’s “historic investment to fight climate change”!

Karine Jean-Pierre: “What may happen in this hurricane season” will be “helped” by Biden’s “historic investment to fight climate change” pic.twitter.com/3sivWm6EfO

What gives? We shouldn’t even be here. I remember another megalomaniac saying “This was the moment when the rise of the oceans began to slow and our planet began to heal….”    because he had won the candidacy for President. So again, what’s with this hurricane?

And our feckless leader has one more bit of advice for those in the path of the storm- get vaccinated!

Never forget when Joe Biden told Americans to prepare for Hurricane season by getting Vaccinated. pic.twitter.com/3eNElVA5CP 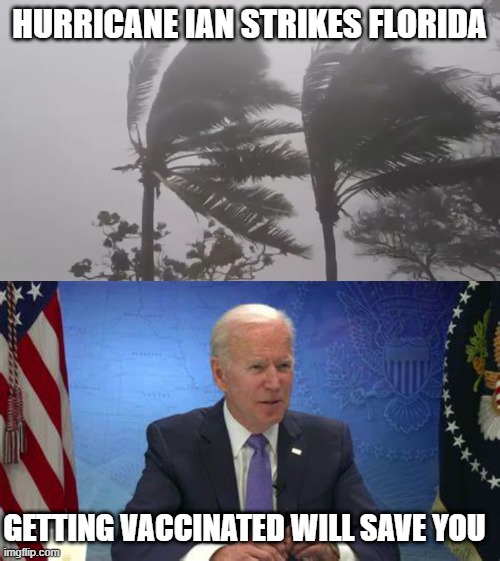 And to think we have two more years of this hell on Earth left.

Climate change, as defined as an existential crisis requiring governments to give their power to unelected Euro-trash who merely want a global socialist state, is a hoax.

Climate change, as defined as an existential crisis requiring governments to give their power to unelected Euro-trash who merely want a global socialist state, is a hoax.

Well, you just invented that “definition” in your brain, so it’s only a hoax if you try to pass it off as the truth (which I imagine you’ll do).

The climate alarmists and paid or models and fear mongering have never been accurate or even close.
Anyone that paid attention in school before Jimmy Carters DOE knows climate changes, Ice ages come and go without cow farts and SUVs.
I dont see people preparing for a hurricane rush to put up windmills and solar panels. Its a death cult, electric cars and china batteries, unreliable inefficient china solar and wind. 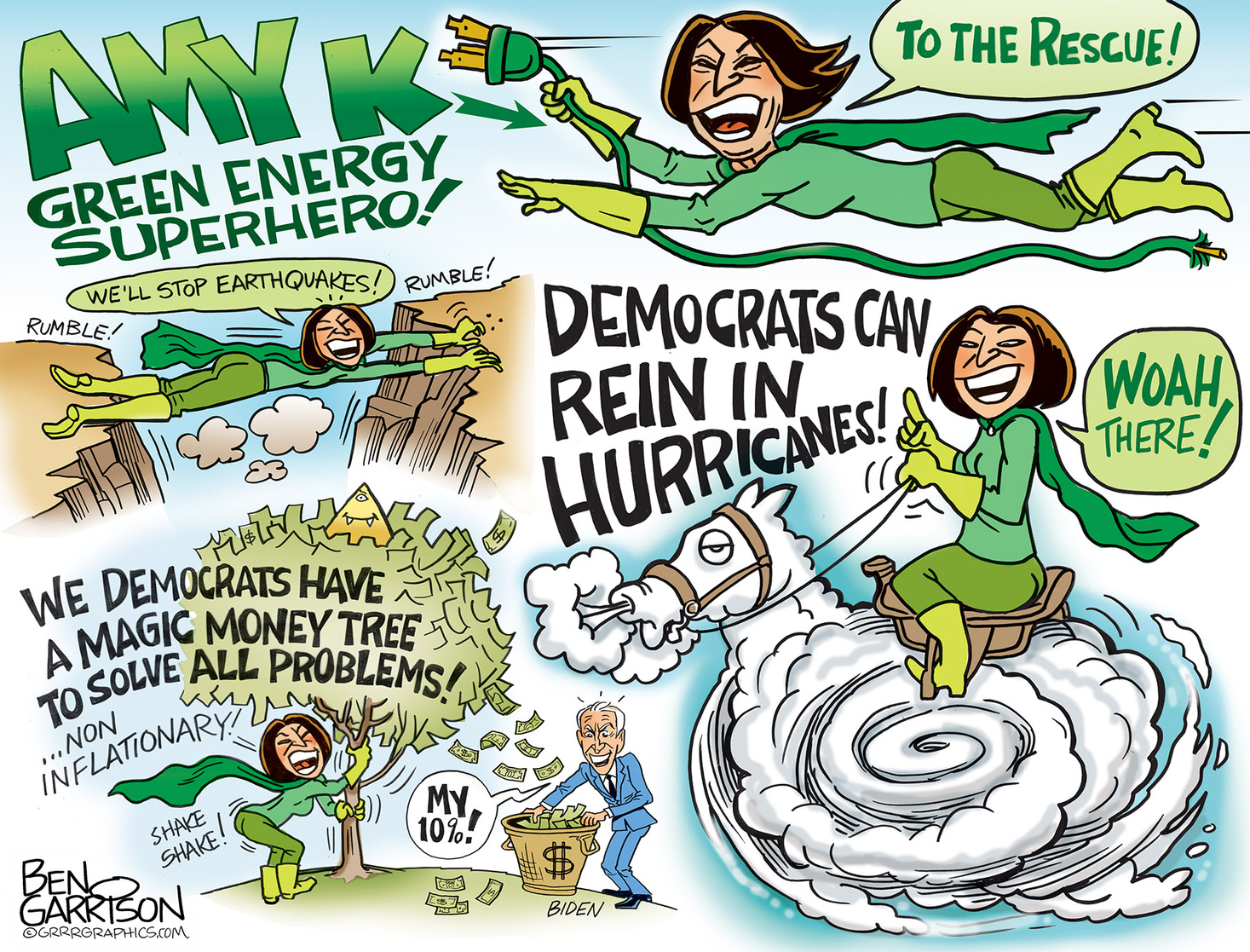 Climate Change, as Leftists define it, is a fake crisis they use to gobble up power.

No one hides it, and only the few cultists on the Left (a shrinking number by the day) would even bother to argue about it.

As I said, we’re trading one corrupt energy lobby for another.

Explosions under the Baltic Sea, then NS-1 and NS-2 are now destroyed and leaking. AND LOW AND BEHOLD, the new pipeline from Norway to Poland opens up…just today.

Then the WH tells us to buy an electric car?

This is about what it’s always about, for the corrupt and the tyrannical: money and power.

We need to oust this dictatorship and restore our Republic, if we can.

Imagine needing to evacuate Florida and all you have is an electric car.

a shrinking number by the day

Whistling past the graveyard

Whistling past the graveyard

And I know, that in your heart, you support Trump and every other sane person on the planet in negotiating a peace deal in Ukraine and ending this very, very unnecessary war.

Garrison is way better then Toles, Horsey and the rest of the infernal scribblers who do their liberal cartoon junk in the usial liberal news rags

And what’s even more entertaining is how Leftists can’t…simply can’t…defend or explain their false definition of “climate change.”

Right now, we have government collusion with car manufacturers (most bailed out by Obama, now paying their bill) to force EVs rather than letting the market do it correctly (Which Tesla was doing quite well).

They are just trading one corrupt energy lobby for another, using politics to steal market share from petroleum energy and using laws to force people to buy things that run off of “green energy,” all conveniently owned by the assholes signing the bill.

This fusion of the state with corporations was a dream of Mussolini, and it’s being done by the illegal Biden regime…while the state-owned American media accuse Prime Minister Meloni of being a “fascist.”

Make sure to challenge all Leftists on Socialism and Climate Change. They can’t offer any cogent response, and will merely parse words, avoid, and speak nonsense…

I guess idiot Biden wanted to have the millions of illegal immigrants he’s shipped to Florida get blown away and drowned. How utterly racist.

True this.
Imagine, if you will, that joe’s green agenda was mandated.
ALL cars and trucks, even all fleet vehicles of police, fire and rescue are all-electric.
Now comes the 48 hour head’s up to evacuate almost all of Florida’s west coast.
People pack their cars with extra belongings, like for a road trip.
But they can only get a partion of their car’s official range on their battery.
Cars start lining up at all the charging stations.
The lines of cars spread onto the highways, blocking one lane, then two.
Some cars run dry of battery juice on the highway and must be towed.
But who can tow them?
The rains and wind start to get bad then people die in place as these roads flood.

Sadly some of these dead will be illegal immigrants who might have voted democrat. (sarc/off)

Although, it seems Leftists/Democrats are so desperate to have an actual climate crisis, they sabotaged Nordstream 1 and 2 to pump out the necessary methane to try in vain to make their hoax real.

Or they just really, really want to cause WWIII, which is highly likely.

Joe Biden: “If Russia invades Ukraine…there will no longer be a Nordstream 2. We will bring an end to it.”

Reporter: “How will you do that, exactly, since the project and control of the project is within Germany’s control”

Climate Change is the trojan horse for the usual goal of any state: global tyranny.

Have we reached the bottom of the right’s Stupidity Barrel yet, or does it go even deeper?

I’m waiting for the article that extols the results of Putin’s Ukraine referendum as proof positive that they want to be Russians.

Hey, they know how to conduct a legitimate election. Right?

I’m waiting for the article that extols the results of Putin’s Ukraine referendum as proof positive that they want to be Russians.
Hey, they know how to conduct a legitimate election. Right?
Off topic as usual go get vaxxed to save yourself from the hurricane advice from Biden.

And thankfully we’re not anywhere near that kind of crisis, much less one where we need to bend the knee to unelected, regime-changing tyrants like Soros and the rest.﻿

The totally clueless predictably believe that they know everything.

The totally clueless predictably believe that they know everything.

Yes. They, and you, predictably do.

The rest of know to ignore the clowns who lie for profit.

Bill Gates wanted to do this, Greg.
He wanted to shade the sun around the planet to mimic volcanic activity and cool the earth.
Back in 2019 he was ready to go, except for the fact that the planes needed to do the work had to fly at 12 miles up and didn’t exist …. yet.
So, crap.
Foiled again!
It’s not stopping his plans to control the planet’s weather, tho.
Just like those evil rich men in Our Man Flint.
Remember?
Flint discovers that the Earth’s weather is under the control of a secret organization known as GALAXY whose scientists are looking to pacify the world.

I bet he still shook hands with her.

Is that why there have been fewer storms and they are not as powerful as predicted?

Your fed narrative of “Putin is crazy” has failed.

This war was provoked, over decades. It could have been avoided.

Thank God Trump has stood up to negotiate a peace treaty. He’s acting as our President, in our current absence of one.

Biden has been nothing short of a complete disaster

They will never allow Trump to fix an issue. They need this to launder huge amts of dollars.

When NS-1 and NS-2 were blown up (probably by the US), I finally knew this war with Russia was exactly what the Biden regime, and their globalist masters, really wanted.

Like releasing Covid, this allows them to consolidate their power.

Go back to your cubicle, Quantico. Your trans-sensitivity videos still need to be checked off.

Now you believe that there are three Federal agents dedicated to keeping an eye on this one Nowheresville blog.

Putin is crazy, like Trump, but Trump wasn’t allowed to attain Putin’s level of moral depravity.

Your fed narrative of “Putin is crazy” has failed.

And you still say it. Idiot.

Trump was demonstrably good at his job. He kept Putin at bay.

You mean like watching Joe Biden finger-f*ck kids on camera?

Haha. You care nothing for morals.

NO ONE can criticize Trump then support creepy Joe Biden, an actual rapist and pedophile.

The fed narrative that “Putin is crazy” has failed.

I don’t think Putin should have invaded, but the war WAS provoked by the West.

Nato expansion, then the US-led coup in Ukraine, installing our own puppet instead of Putins.

Then Burisma getting chummy with the US with simply bribing the one overseeing the new Ukrainian power structure: Joe Biden.

Trump was falsely impeached for investigating.

Now we have war in Ukraine

Only an agent for the regime or a quisling would say otherwise, and get destroyed in any debate about the subject, in 5 seconds.

That’s why you idiot trolls are suddenly coming out of the woodwork.

No comment on the subject? How about geoengineering, dimming the sun or what they are spraying us with?
As a move to fight against alleged climate change, researchers are developing technologies to block sunlight from reaching the earth’s surface. This includes a program from Harvard, financed by Bill Gates, to spray chemicals into the earth’s stratosphere that would mimic the effects of ash clouds from a volcanic eruption. Other programs include the use of “space bubbles” to reduce the amount of sunlight reaching the earth.
http://www.starshipearththebigpicture.com/wp-content/uploads/2016/05/Hopi-chemtrails.jpg

Hey, this is an article about a DEMOCRAT’S stupid proclamation. This is YOUR stupidity, not the right’s.

So what’s the official reason “phillip” was removed?

Don’t have the time nor patience to deal with spamming comments. He posted 45 comments in a little over an hour full of drivel and insults. He was banned long ago for the same behavior.

Ya Curt is cool like that, I seem to remember the fool and his pointless MO. Was hoping he had spun off the earth with his drunk posts.

I just find it strange that all four of them chimed in to the same post about the federal government going totalitarian.

I think they know in their hearts they are on the wrong side of History, but don’t know how to get their minds out of it.

Hurricane Katrina was suppost to because of Global Warming/Climate Change then it was Hurricane Sandy then Harvey and Irma at least according to the M.S. Media bottom feeders and the Eco-Freaks as well as Gore the Bore and DiCaprio the Dumb

Has there been any reporting covering the relief efforts mounted by ANTIFA and BLM?