Millions of illegals are going to vote in the coming elections: Biden’s plot 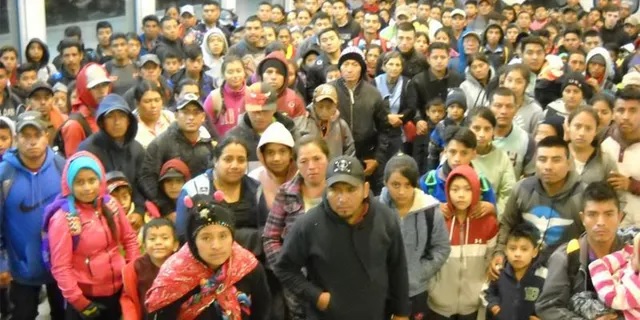 I want to remind of something I said already- you are being browbeaten and intimidated into being afraid to question elections. If you do dare question an election outcome today, you are an enemy of the state and will be dealt with accordingly. Biden has declared 75 million Americans to be a “clear and present danger.” That declaration allows Biden to suspend your First Amendment rights in case you were thinking about raising your concerns about voting integrity or results.

Never mind that democrats spent four years not only questioning the 2016 but claiming that the election was stolen, that Trump was an illegitimate President, that Trump was a Russian asset and more. Now anyone doing the same is a criminal as Adolf Biden decreed it a crime. All of this is meant to crush the free speech of those who normally would voice concerns. Now I’ll tell you why.

In March, Biden issued an Executive Order 14019.  In summary it says:

Remember that last one

Biden and his White House- controlled DOJ intend to have the government interfere in the 2020 and 2024 elections, but they refuse to tell you how

The Department of Justice (DOJ) is refusing to release 15 pages of documents explaining the Biden administration’s strategy to implement a “voter access” policy that is being coordinated with left-wing groups just weeks before the 2022 election.

There’s a reason Biden is flooding the nation with illegal aliens. Once you know that illegal aliens are being given a social security cards what’s going on should crystallize instantly in your mind.

DHS then provides many immigrants with an administrative document titled “Order of Release on Recognizance”, which grants them the legal right to be present inside the United States, according to two such documents that immigrants on the buses agreed to share. These require the immigrants to self-report to a deportation officer in their destination cities by a specific date provided.

One Nicaraguan migrant showed CIS a DHS document titled “Interim Notice Authorizing Parole”, which grants him a renewable one-year term to live legally inside the country.

Most will likely use their time to apply for asylum, a lengthy, back-logged process that allows for work authorization and Social Security cards during an adjudication process that can drag on for years.

And what can one do when one has a social security card?

Without a doubt in those 15 pages that the DOJ won’t release are the details. Left wing groups will be delivering ballots to illegals, helping them (if they aren’t already) to register to vote and then they will be “assisting voters “in completing voter registration and vote-by-mail ballot application forms.”

And if your question this? You’re an election denier. An enemy of the state. A clear and present danger. And you will lose your First Amendment rights. The FBI will come and take your computers and your phone.

You don’t have it quite right. The Illegals aren’t actually going to vote, nor did they vote in 2020 or previous elections. Dead people don’t actually crawl out of the grave on election day and people don’t drive back to their previous state to cast a second ballot.

It’s all about the Voter Rolls. They just need names on the voter rolls where they can assign fraudulent ballots. When they drive a mini-van into the election center at 3am filled with ballots from the printing center, the ballots have to be assigned to a voter on the votor rolls.

Jose and Juan have no more idea they voted for Biden than your deceased grandmother does.

You ever wonder New York, California, or Maryland would give driver’s licences to illegals? Doesn’t make sense, unless you attach “Motor Voter Laws” to their scheme. They just need you on the roles, they’ll do the voting for you.

I must respectfully disagree. I was an In Home Visiting agency nurse who along with MSW services was tasked with monitoring the health, well being and vaccination status of Hispanics . I can tell you that I saw many of my patients and their family members wearing an ‘ I Voted ‘ sticker and admitted to us that they did vote. Also I was told, that this would be impossible to do in their country without citizenship. The MSW with me asked one 28 year old male if he felt guilty for voting . He replied that America was as stupid as it is rich.
I had no response to his statement.

I wasn’t aware that Visiting Nurses confirmed the citizenship status of their patient’s family and household members. Do they check everyone’s birth certificates, or just have them all complete questionnaires?

@Greg
What you aren’t aware of could create an entirely new version of Wikipedia.

Biden and Benidict Arnold have lot in Common

BREAKING: Busloads of Migrants Dropped Off at Border Czar Kamala Harris’s Home – At Least 100 Illegal Migrants Dumped on Her Lawn

But, but, but, the slut whore Vp said the border was secure.

The misogyny is strong with this one.

@Michael
She is a slut and a whore. It’s how she became Attorney General of California. Now, considering her the VP is debatable.

And she got rid of them post-haste. So compassionate!

Harris can ask the migrants just given a ride to her house how secure the border REALLY is.

To Greg:
I ask. How difficult is that to imagine? If you are aware of all facets of public health nursing in all 50 states, then you would know that a complete immunization history is obtained. Do I need to define the word “Complete” ?
They freely and with out any hesitancy tell me that they walked over the border and via a large well known Church charity, they obtain bus passage to their desired destination.

His purpose for being is to make sure that people can’t use their own eyes and senses when it comes to reality, but instead need to replace everything in their brain with government approved websites and narratives.

He wants to kill off Republicans without any due process or evidence, but then suddenly is a miser about something as obvious as someone being a non-citizen.

I tend to be distrustful of such anecdotal reports, when highly motivated organizations such as the Heritage Foundation have beat the bushes looking, but can find no evidence that significant numbers of undocumented aliens have voted.

Trump’s stolen election scam has been built entirely on anecdotal reports, which I suspect are often subjective misinterpretations rather than intentional deceptions. We’re all biased and prone to such errors; it’s part of human nature.

The intentional deception occurs when such reports are claimed to be indicative of some large-scale phenomenon, and people are then convinced that it must be real if it can’t be disproved—which isn’t how logic actually works.

I tend to be distrustful of such anecdotal reports, when highly motivated organizations such as the Heritage Foundation have beat the bushes looking, but can find no evidence that significant numbers of undocumented aliens have voted.

Think about how we feel everytime an you and your party want to arrest and jail Trump, and Conservatives, on anecdotal stories told by people who weren’t even there, or Democrat staffers like ERIC CIARAMELLA who pose as “whistleblowers.”

His purpose for being is to make sure that people can’t use their own eyes and senses when it comes to reality, but instead need to replace everything in their brain with government approved websites and narratives.

He [greg] wants to kill off Republicans without any due process or evidence, but then suddenly is a miser about something as obvious as someone being a non-citizen.

And greg, you LOVE anecdotal reports…as long as they confirm your narratives.

NO. Signed affidavits are not anecdotal, especially when you have multiple confirmed witnesses. Add to that the video evidence, and the truth is obvious: the election was rigged and we have an un-elected dictator destroying our country, and the world.

It’s generally accepted amongst American citizens that the 2020 election was rigged. No amount of your squawking can change that fact.

people are then convinced that it must be real if it can’t be disproved—which isn’t how logic actually works.

Unless you are “you” and most other Democrats, who can never give anything tangible on Trump, and fail at every invented turn.

Trump won’t be indicted based on anecdotal reports. If he’s indicted, it will be based on documentary evidence and sworn testimony given by credible witnesses in a courtroom.

Signed affidavits ARE anecdotal, by their very nature. That’s why their admissibility as evidence in court is so limited.

“Trump won’t be indicted based on anecdotal reports.”

He doesn’t have to be. You criminals have been illegally using the “court of public opinion” rather than due process on Trump for over six years. Those deceptions alone would make the 2020 election fraudulent.

Signed affidavits ARE anecdotal, by their very nature. That’s why their admissibility as evidence in court is so limited.

You’re a fool. Someday, you’re going to tell me what country you are in and who is paying you lie, because you won’t have any reason not to.

Looking forward to that day, bub.

True, but when you have a few that say the same thing, what’s your excuse then?

0
Reply
Deplorable Me
Reply to  Amy

Trump won’t be indicted based on anecdotal reports.

Um… he was IMPEACHED based on anecdotal reports.

Yes. You never have any, rather claiming it’s not true unless it’s on a “website.” Typical sycophant for the state you are, whether it be the 2020s, or the 1500s.

Evidence has been given. You reject it, without any of your own.

0
Reply
Deplorable Me
Reply to  Amy

So when this lying, corrupt regime tells us, over and over, the southern border is secure, that doesn’t mean it is? Golly, who knew?

The two top issues for a majority of Americans this November are inflation and immigration.

There have been 17 straight months of wage losses for Americans. The more the illegitimate regime spends, the higher inflation will go.

biden does not want to improve the economy and he does not know how. He is an economist illiterate

The GOP must be heartbroken about the averted rail strike, which never would have needed to be averted if Trump had been President.

The GOP must be heartbroken about the averted rail strike, which never would have happened if Trump had been President.

Haha. You’re damn right there never would have even been a strike if Trump were still president.

The economy would be too good.