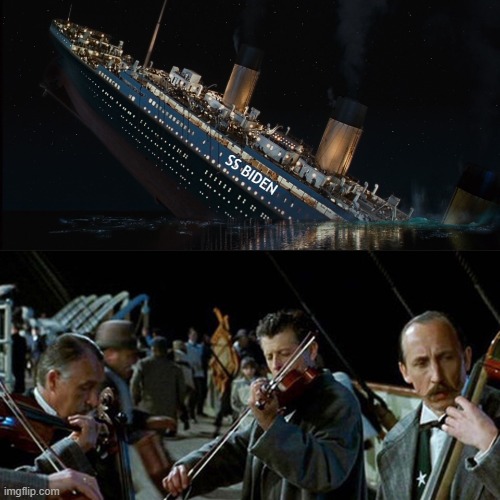 I truly am wondering if we are witnessing the death throes of the Biden regime. The country is being bombarded by a barrage of lies and deceit from Biden and his trusty sidekick KJP.  Biden is shouting his lies all the time, as if a bellicose fusillade of falsehoods will convince you to not pay attention to the man at the wheel but to keep believing in the Captain of the SS Biden. Captain Oblivious spent this afternoon shouting at his celebration of the Inflation Reduction Act.

Biden: “THINK ABOUT WHAT YOU’D THINK ABOUT” pic.twitter.com/HGeiJpqYfj

As of right now, the market is down nearly 1300 points. That’s what Wall St thinks of Biden’s Inflation Reduction Act. It would more accurate were it named the Investment Destruction Act.

It’s so bad that even CNN has to admit it

CNN: “There is this unfortunate split screen right now with the Dow taking a total beating…it feels like it’s hard to be celebratory for some people.” pic.twitter.com/KOGbacKFhT

That’s not even close to true. pic.twitter.com/oIqMGyJrgA

It’s been lots of fun watching the feckless Karine Jean-Pierre stumble her way through the early stages of her job but the fun’s over. The circus is over but refuses to leave town. Karine Jean-Pierre’s propaganda has reached DefCon 1. She’s making Baghdad Bob look like Abe Lincoln. Today was a day to remember, much in the same way as the day the Titanic sunk was a day to remember.

Karine Jean-Pierre: “Overall, prices have been essentially flat in our country these last two months.”

This is completely false. pic.twitter.com/7RYf1OIenl

“What exactly would the ‘Inflation Reduction Act’ do to reduce inflation in the short term?”

Jean-Pierre: “We are doing a lot more [than the Trump administration] to secure the border and could be doing even more if Republicans would stop their obstruction.” pic.twitter.com/smSidn9VDi

Biden told us that inflation would be transitory and that last month it was zero.  He tells us the border is secure. Afghanistan was a success. 87,000 IRS agents willing to use deadly force on billionaires. Trump is the bad guy. Republicans are a clear and present danger. It’s all nuts. Biden’s integrity hit the iceberg long ago, but finally is slipping beneath the waves.

And the band plays on.

What idiot Biden and his corrupt regime says has nothing to do with reality on this planet. The truth doesn’t matter to this regime and the media doesn’t make it a priority.

Just wondering, when will the Washington Post be publishing its compilation of all of idiot Biden’s lies? What’s the problem, take up too much space? Not enough memory storage to create such an article? As far as WaPo or NYT goes, that is just a rhetorical question. But why doesn’t some other outlet do a compilation?

They did it for Trump, even though most of the “lies” were either promises not yet fulfilled, comments taken out of context or outright media lies. Is there some kind of bias at play here?

As those of us who lived through it in the 1970’s remember the price inflation is here to stay. Long after the inflation was curbed the prices remained high. And there were no supply issues then. I’ve told my kids get used to three dollar a loaf bread, five dollar a gallon milk and three to four dollar a gallon gas. Once the prices are established the prices won’t come down. Remember merchants are people too. They are just as afraid as you are and they will not lower prices until they are sure they won’t get put in the trick box.

The Biden White House really took this to heart. pic.twitter.com/RwMw0SMgtD

The American people have no confidence in Benito biden.

He could not possibly be a bigger joke

@Curt
If she was in the idiot Biden regime, she would be the smartest person there, and she’s an idiot. Why doesn’t she try printing her OWN money and see how that “construct” works out?

He could not possibly be a bigger joke

But, he IS working on it.

joe sat in an all electric car at the Detroit Auto Show and said, I’m driving it home, wanna come?
We really should make joe drive that stupid car all the way from Detroit to DC (397 miles) or Delaware (705 miles).

It should be a nice trip…..in a gas car.
Two drivers, one day for DC, maybe two days for Delaware.

BUT add in all the mandatory charging the car’s battery and a one day trip becomes two or three.
The 700 mile trip takes 5 or 6 days.

I’ve had it with joe’s constant lying.
He needs a new writer for his teleprompters.