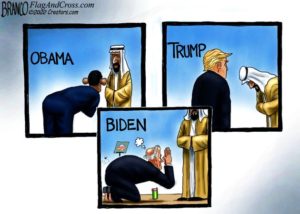 Welcome back to Day 528 of the Let’s Go Brandon* Occupation! So, did anything crazy happen since last week’s post went up on Friday morning? Indeed there was. But first we jump into The Wayback Machine to a year ago

This one is a tough read, as it puts a lot of the blame on us Normals for letting the Radicals take charge. But the writing is amazing – I hope that when I grow up someday I can write like Tal Bachman. Here’s a taste:

Whether they realize it or not, Wokists themselves combine the lunatic loyalty of the Manson family with the hollow pseudo-joy of Jonestown residents, the racism of National Socialists, the inhumanity of Mao Tse-Tung, the bratty tantrums of Veruca Salt, the nihilism of Bakunin-style anarchists, the totalitarianism of Stalin’s Soviet Union, the child torture and sacrifice of the Mayans, the derangement of Heaven’s Gate followers, the sadistic violence of the Jacobins, and the ruthless control-freakism of the current Chinese Communist Party.

6/25 – Antifa In NYC Brought A Flamethrower To Abortion Protest…

Not Portland or Seattle? Frisco and NY came in at 2 and 3.

6/28 – America Is Not Immune from Brown Shirts

This problem keeps getting worse.

6/29 – The Institution of Marriage is Under Mortal Attack

Don’t think that what’s been happening for teh last few decades has not been deliberate.

Take this threat seriously – do you see amy other viable candidate for the Dems? But will it be Barack 2.0 or Hillary 2.0?

Have a great weekend, and Happy Independence Day!

I watched as a friend who was 6 months pregnant was forced to choose between taking the vaccine or losing her job. Where was all this defense of women’s medical freedom then?

Next: the Supreme Court ruling on abortion https://t.co/TUSnP9Y49H