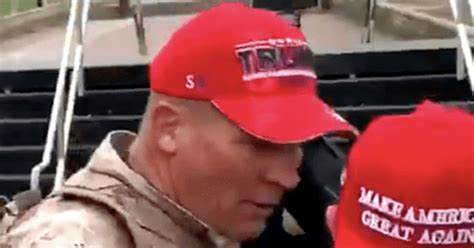 The Jan 6 committee is and has always been an echo chamber. It is a one sided highly partisan exercise that is entirely absent context. It’s been a non-stop spewing of hearsay and innuendo which has been seized upon by the media, much to their detriment. The truth is escaping bit by bit despite being locked in a democrat chokehold.

Cassidy Hutchinson offered essentially nothing but hearsay and was found twice to be mendacious. The account she gave of the alleged “lunging” simply could not have happened as she relayed it. She was not the author of the note as she asserted. Normally that be enough to impeach a witness completely, but the committee is digging in its heels and unwilling to accept rebuttals. Dan Bongino (a former Secret Service Agent in presidential protection for Bush and Obama) does a good job of fisking Hutchinson’s account.

Epps was part of the initial Capitol breach

“We need to go into the Capitol”

Epps was #16 on a list of people the feds wanted to identify but was curiously dropped from the list. The Jan 6 committee told us that that asked Epps is was an informant or undercover agent and Trump hater Adam Kinzinger assures us that Epps is not. Far be it from me to doubt the committee. A woman doing pretty much exactly what Epps did was arrested while Epps remains untouched.

Epps has to testify under oath. He clearly was there on Jan 6 as a provocateur. The flailing attempts by the media to dismiss him as important to the Jan 6 investigation only emphasizes the importance of his being questioned. We will never know the truth until Epps testifies under oath and we learn how many FBI undercover agents and assets were in the crowd on Jan 6.

This is how we installed the regime in Ukraine, and many other nations.

A bit harder when you see it in real time, and know for a fact it’s a false-flag operation to cover up a Democrat coup.

We will not not the complete story until we sack the j6 goofballs and initiate a real investigation in January of 2023.

Epps has to testify under oath. He clearly was there on Jan 6 as a provocateur.

But not before this phony venue. It needs to be an actual bipartisan panel that asks the questions. Explain this: why wouldn’t the current panel of Trump-haters seeking to discredit him completely NOT want to question a MAGA-hat wearing zealot openly compelling others to enter the Capital and “defend the Constitution”? There is but ONE possible explanation.