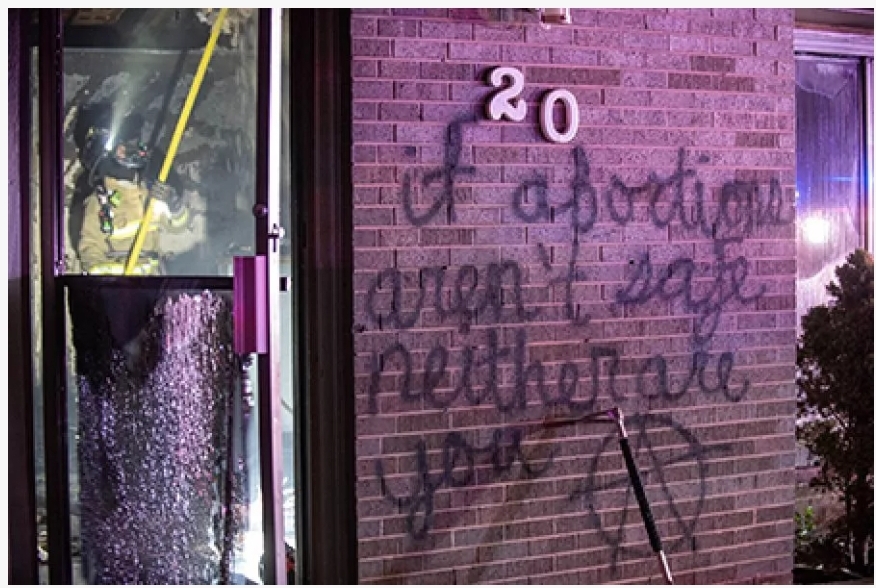 Seems to me every time something happens in this country that offends the left, violence and burning ensue. Sure enough, after the Dobbs decision was handed down left wing whack jobs took to their favorite past time.

There was an insurrection in Arizona. The details sound very familiar:

Pro-abortion rioters attempted to storm the Arizona capitol building in Phoenix while the state’s senate was in session. Pro-life Republican state Senator Kelly Townsend, who was inside the senate building, tweeted members of the Senate were “being held hostage inside the Senate building.” Townsend said during one period the senators could “smell teargas and the children of one of the members are in the office sobbing with fear.”

In the insane asylum known as Portland violence broke out:

A group of black-clad marchers​ turned violent Saturday night in Portland, Ore., smashing windows and scrawling graffiti on downtown businesses as protests continued to rage across the nation against the US Supreme Court ruling overturning Roe v. Wade.​

Several banks and coffee shops had their windows broken, a van belonging to Portland Public Schools was spray-painted, and a pregnancy​ resource center was vandalized, the Portland Police Bureau said in a statement Sunday. ​

“If abortions aren’t safe then you aren’t either,” ​a flier announcing the march​ said, according to Oregonlive​. ​

Try bringing that to an open carry state.

Over at Breitbart John Nolte notes that baby killers are rioting and making life miserable for blue state residents in Tucson, Seattle, DC, LA and Dallas.

The Antifa maggots are always up for a good riot because it makes them feel empowered despite them being cowards. IMO most, if not all, of these so-called “protesters” are mentally ill. Watch

There’s…a lot going on at the pro-abortion protest in Dallas. None of it is good. pic.twitter.com/JcH9PJsakp

Even more lunacy can be seen here:

I’m not at all sure what’s going on in this video, but we do see some world class narcissism sprinkled heavily with mental illness. Even so, the script is always the same. Whenever something offends them, they riot and burn.

The Left is violent.
The Right is not.
It’s easy to see, with facts and date to validate it.
That’s why a false flag on J6th was set up; to pretend Leftists could flip the script.
They are insurrectionists, religious zealots, and just mean angry people overthrowing our Constitutional Republic.
Biden won nothing, and it really shows as Trump continues to lead America even after they rigged an election.

You can ask every one of these thousands of screaming useful idiots where in the Constitution is the “right” to an abortion” or what the overturning of Roe v Wade actually means and I bet not a ONE can give an intelligent answer. They are all just manipulated pawns.

How many of these Pro Abortion militants are also Radical Enviromentalists who oppose Logging and Hunting and donate to PETA The HSUS,Greenpeace,NRDC,Sierra Club,Friends of t he Earth EDF and a a total Vegans and who weep for the Trees

A group of black-clad marchers​ turned violent Saturday night in Portland, Ore., smashing windows and scrawling graffiti on downtown businesses as protests continued to rage across the nation against the US Supreme Court ruling overturning Roe v. Wade.​

Remember all the riots over the Obamacare decision? How about the pogrom of violence after the “gay marriage” decision? Oh, wait… The right doesn’t react to decisions they don’t like with violence. Intelligent adults act like intelligent adult. It takes ignorant, manipulated, spoiled crybabies to throw violent, destructive tantrums when they don’t get their way. Worse, this fascist DOJ does nothing to stop it because the violence is committed by an arm of the Democrat party.

On the bright side:

Sure, the few who show up are violent.
But, mostly they are paid protestors, not spontaneous gatherings.
In fact, the Left is having to lie like rugs to gin up even the few useful idiots to go along with their paid protestors as human sheilds.