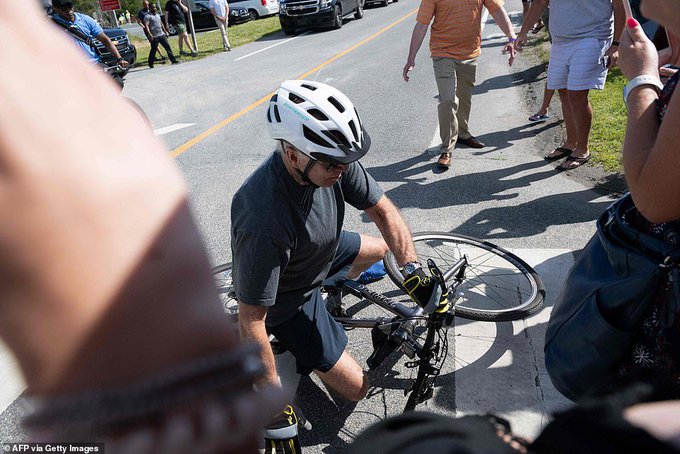 Joe “what am I doing here” Biden, humming the theme from Top Gun,  just fell off of his big boy bike while riding with his peeps in Rehoboth Beach.  According to the lame-stream media, Trump jumped out of the bushes and yelled, “Miss me yet?” Startled, Joe toppled over faster than a fat kid on a wet slip-n-slide.  Joe violently kissed the pavement and scuffed his leather aviator jacket with the huge China patch sewn on the back.  Angry Joe lashed out and blamed gravity, the rain, and those dastardly Republicans.

Inquiring minds want to know: What the hell was Joe doing riding a bike?  Seriously, Joe is older than dirt and can barely walk and chew gum at the same time.  Joe is so feeble that he once fell over playing checkers.  Lump bump!

Biden’s mishap on the mean streets of Rehoboth Beach is a metaphor for Biden’s entire presidency:  INCOMPETENCE. Joe is confused and befuddled.  He followed instructions and yet America morphed into a banana republic on his watch.  He did what he was told and is mystified why his popularity is lower than whale sh*t on the bottom of the ocean.  The stock market is in the toilet.  Gasoline prices just hit an all time record high.  I recently paid $5.69 a gallon for regular gas.  People are shocked at the cost and vehemently curse Biden and the Democratic Party.  Mothers can’t find baby formula and many Democratic cities are cesspools filled with violence, crime, hatred and filth.  The crisis at the southern border is so bad that U.S. Immigration officials are throwing in the towel and saying, “What the point?”

Joe is honestly befuddled.  He did what he was told and cannot fathom why people hate him with such venom. Apparently, even Millennials are turning against Biden.  You know, those entitled snowflakes, born on third base who go through life thinking that they hit a triple!  They thought it was hilarious to vote against mean, orange, bad-man Trump.  The lame-stream media passionately loathed Trump, so Millennials, like naïve sheep, tweeted ad nauseam, “WE HATE HIM TOO!” They hated Trump and his mean tweets and then vindictively voted for an old, senile, cognitively challenged, dinosaur.  They aren’t laughing anymore! At some point they stopped tweeting about Kim Kardashian and Pete Davidson stranded on Gilligan’s Island and awakened from their stupor.

WELCOME TO THE PARTY KIDS!

In a way I actually feel sad for Biden.  He always wanted to be king but never should have been allowed to sit on the throne.  Joe is a puppet and sooner, rather than later, his “trusted” advisers who told him what to say and where to sign will melt away like a snowball in hell.  The damage has been done.  Biden will take the blame because he wears the crown.  Joe will flail around in the fake oval office, cursing and blaming Donald Trump. Nobody cares.  Biden will always be remembered as an ancient, pathetic, failed leader who exhibited spectacular incompetence while destroying  America. “Close” advisers will write books, appear on CNN and make a few bucks throwing Biden and Harris under the bus.  Those slimy, slithering, snakes will skillfully avoid any personal culpability for ultimately destroying America.

Joe did exactly what he was told.  His wife knew exactly how this would end and built a moat teeming with alligators around their exclusive 2.7 million dollar beach house in Rehoboth Beach. (Apparently, “it’s good to be the king.”)  Jill desperately wants to keep the gawkers away and now we know exactly why:

WELCOME TO REHOBOTH BEACH
HOME OF THE WORST PRESIDENT
IN UNITED STATES HISTORY!