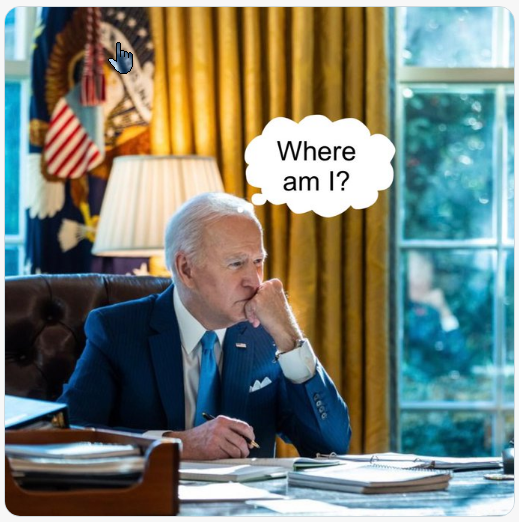 President Biden is doing a great job-just ask anyone in the lame stream media.  Stephanie Cutter, a CNN political commentator, when asked about Biden’s plummeting approval numbers replied, “By any metric with the exception of inflation, this country is moving forward under his leadership.” There you have it.  Case closed. America is moving forward.  Forward towards the abyss?  Forward towards annihilation?  Forward to becoming a third world banana republic?

Actually, Stephanie is accurate about one thing.  Biden is successfully destroying America, the land that we love, faster than anyone imagined. We always knew that Biden was frail, confused and cognitively challenged but Wreck-It Joe has been making terrible decisions at Warp Speed.  Scotty, the Scottish Chief Engineer of the Starship Enterprise would be screaming at Biden, “I dannae [sic] is she can take anymore Captain!”

Captain “BUMBLING” Biden is oblivious to the black hole that our country is rapidly approaching.  Inflation is crushing our spirit, the southern border is wide open, our U.S. National Debt is $30.470 trillion dollars and 40 million Americans are living in poverty.  Mothers can’t find baby formula to feed their infants and the DOW Jones Industrial Average has been down for eight weeks in a row, the longest streak since 1932.  Meanwhile, clueless Joe dithers around the fake Oval Office, blaming TRUMP and waiting for an Uber ride to Rehoboth Beach.

Scotty, down in engineering, would be screaming, “She can’nae [sic] take any more Captain!  She’s gonna blow!”

Never fear America, Biden’s wingman, “CACKLING” Harris is primed and ready to step into the breach.

A bowl of alphabet soup makes more sense than Kamala.  Meanwhile, back in La La Land, our crack leader was asked if the United States would get involved militarily to defend Taiwan.  Biden couldn’t read the answer on the teleprompter and went rougue:  “Yes, that’s a commitment we made.”

Actually, that makes sense in Biden’s Bizarro World.  Every decision Joe makes is wrong. Why not challenge China, who has nuclear weapons, a strong military presence and a bad attitude to an armed conflict?  Taiwan is only 6,374 miles from America.  What could possibly go wrong with that scenario?  Hey, give the guy a break.  Joe did a marvelous job evacuating Afghanistan except for the Americans he forgot, the 13 military personnel who returned in body bags and $84 billion dollars of our expensive and sensitive military equipment that he gifted to the Taliban.

Biden is aggressively and passionately committed to destroying America forever.  2000 Mules stuck us with Biden/Harris at the helm and the USS America is literally imploding.

“She can’nae [sic]  take any more!  She’s gonna blow!”  We know Scotty, but the dastardly Dems will just blame Trump.