Oberlin and its woke Onazis 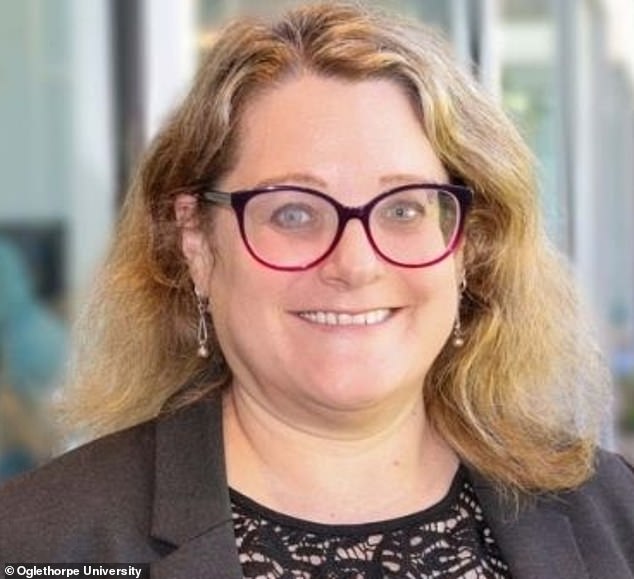 See that thing in the picture above? It is the face of pure evil. It is a monster. It represents the devolution of colleges, which are absolutely out of control. Led by the likes of the thing above, they have become fetid cesspools of self-righteousness and amorality.

More than 100 students at Yale Law School attempted to shout down a bipartisan panel on civil liberties, intimidating attendees and causing so much chaos that police were eventually called to escort panelists out of the building.

The March 10 panel, which was hosted by the Yale Federalist Society, featured Monica Miller of the progressive American Humanist Association and Kristen Waggoner of the Alliance Defending Freedom (ADF), a conservative nonprofit that promotes religious liberty. Both groups had taken the same side in a 2021 Supreme Court case involving legal remedies for First Amendment violations. The purpose of the panel, a member of the Federalist Society said, was to illustrate that a liberal atheist and a conservative Christian could find common ground on free speech issues.

This kind of disruption is expressly prohibited at Yale. The furor was so egregious that one speaker felt threatened and requested a police escort to leave the building. The Yale protesters then whined about feeling “imperiled by the presence of police.”

Law student Rachel Perler objected that “[It’s] just ironic that students who showed up to engage in free speech, either by asking questions or by protesting the event, were faced with armed police.”

These idiots are the future of the law profession. Yale will not be punishing them for violating its own code of conduct. Apparently, Yale requires law students to major in fascism and minor in being an a**hole.

A female student at the University of Buffalo was hunted down by a woke mob for the crime of inviting Allen West to speak there.

But this pales in contrast to what Oberlin college has done to Gibson’s Bakery. This is what happened

The case stems from the November 2016 arrest of Aladin, who was accused of attempted robbery for trying to “steal wine or otherwise illegally obtain wine” from the bakery with a fake ID, according to court documents. Gibson Jr. then confronted Aladin about two bottles of wine he had seen the student attempt to hide under his shirt and told him he was contacting the police and not to leave, according to police reports. Gibson Jr. then took out his phone to take a picture of Aladin, who slapped the phone from his hand and caused the device to strike Gibson Jr.’s face. Police said Aladin then ran from the store, dropping the two bottles of wine to the floor.

Gibson Jr. then “chased the student out of the store across West College Street and into Tappan Square .  . . where he placed the student in a chokehold.” Two of Aladin’s friends, black female Oberlin College students, intervened and “tried to pry Allyn Jr. off Mr. Aladin,” the college claimed.

Oberlin police officers arrived at the scene and arrested the three students — Aladin with robbery and his friends with assault — but did not arrest Gibson Jr.

As you probably know, when you’re woke you need not wait for the facts to come out. You just create your own version of events and act on that, no matter how wrong your actions are.  You become a woke James Bond with a license to kill innocent businesses and reputations. The thing above led the charge.

Raimondo encouraged the boycott and distributed fliers during the protests accusing the bakery of a longtime history of racial profiling and offered students up to $100 in compensation for protest supplies.

She even texted another dean to share her desire to unleash another woke mob on an academic who blasted Oberlin’s bullying of Gibson’s.

This is one of the flyers distributed in the protests 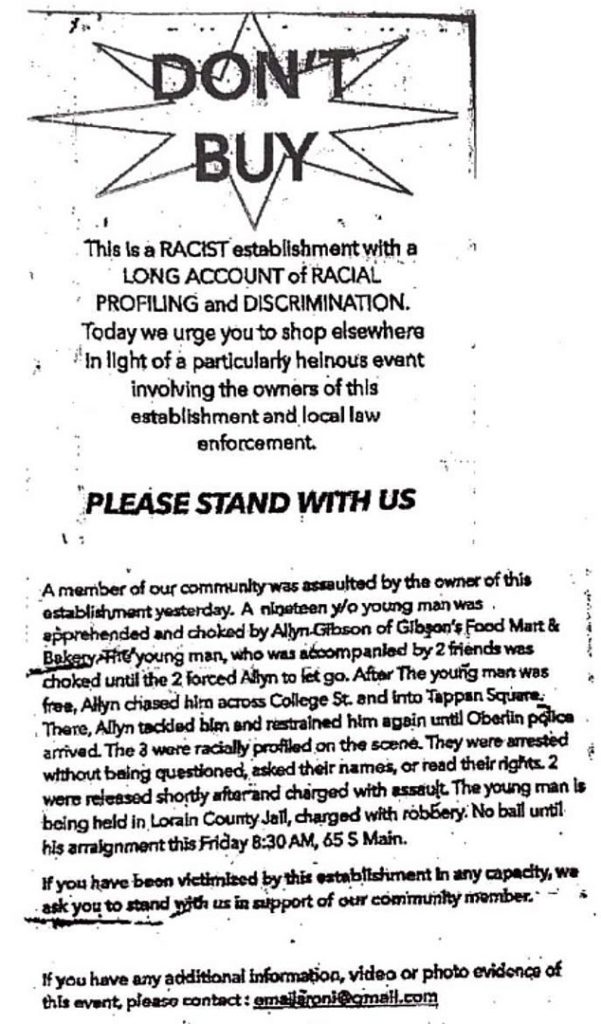 In response to the accusations of racial profiling at the bakery, police conducted an investigation and found that 40 adults had been arrested for shoplifting at the bakery in the past five years, among them six African Americans.

Six out of 40 is racial profiling?

None of this mattered. The thing above bullied and continued to lie about Gibson’s. Eventually the truth emerged

In August 2017, Aladin and the two students pleaded guilty to attempted theft and aggravated trespass, court documents state, and were required to pay a fine. Before their sentencing, each student read a statement acknowledging that Gibson’s was justified in trying to restrain Aladin and that the actions of the shop’s employees had not been racially motivated.

“This unfortunate incident was triggered by an attempt to purchase alcohol,” Aladin wrote, according to court documents. “I believe the employees of Gibson’s actions were not racially motivated. They were merely trying to prevent an underage sale.”

But the lying and bullying went on. Gibson’s filed suit against Oberlin and the thing for libel and slander

The bakery accused the college of supporting and promoting the students’ claims of racism and sued the liberal arts school, as well as Raimondo, for libel, slander, interference with business relationships, interference with contracts, deceptive trade practices, infliction of emotional distress, negligent hiring and trespass.

The bakery’s owners argued that Oberlin College “facilitated, encouraged, and promoted the illegal defamation and economic boycott” of Gibson’s Bakery by helping students copy and distribute fliers, suspending classes and supplying protesters with free food and drink. College leaders also “encouraged students to demonstrate outside Gibson’s Bakery in lieu of attending scheduled classes and provided credit to the students who attended and participated in the demonstration(s),” according to the complaint. Additionally, Gibson’s argued a Facebook post by an Oberlin’s Department of Africana Studies stated: “Gibson’s has been bad for decades, their dislike of Black people is palpable. Their food is rotten and they profile Black students. NO MORE!”

The lawsuit claimed college tour guides continue to advise prospective and future students not to shop at Gibson’s Bakery because it is a “racist establishment” that “assaults students,” the complaint stated.

Gibson’s was awarded $44 million in damages, which was ultimately reduced to $33 million. An appeals Court has since upheld the sentence. Oberlin arrogantly refuses to pay, perhaps hoping the entire family will die first. Patriarch Allyn Gibson died this past February. His son, David Gibson, died of pancreatic cancer in 2019.

The thing has moved on to a cushy job at Oglethorpe college in Georgia where it can pursue and destroy other families and businesses. Its fellow henchmen are also thriving.

Oberlin was described as an “insane asylum” in 2016 even before all this transpired. Oberlin graduate Michelle Malkin said, “they had it coming.”

For decades, grievance-mongering Oberlin elites have bullied and defamed innocent white people without consequences in their multicultural Ohio enclave. False racial allegations and toxic identity politics are the bread and butter of Oberlin campus life.

Read this. The irony is so thick it may choke you

“This divide and alienation is not just siloed in Oberlin, but is representative of a larger national divide that has worsened in recent years, as many Americans become more and more nationalist and rally against progressive thinking and higher education,” she added. “This case represented an opportunity to ‘stick it to’ a leftist institution and I think some people rallied behind that.”

Some free speech advocates and lawyers have said the verdict of the case raises concerns about freedom of speech on college campuses.

“Holding universities financially liable for student speech will inevitably lead them to police and censor that speech, creating a chilling effect that is antithetical to the First Amendment,” Schary told Salon.

Free speech? These narcissistic idiots exercised free speech. What they don’t have but want is freedom from accountability for their lies. Freedom from responsibility of the damage they caused. They want free speech but only for themselves. There is no greater threat to free speech than college campuses.

It pays really well to be woke. Woke operates in its own malicious world, unencumbered by fairness, laws or justice. Woke is a cancer that is killing education. A lot of colleges really need to be demolished. These should be the first three.

Dust off and nuke it from orbit, its the only way to be sure.