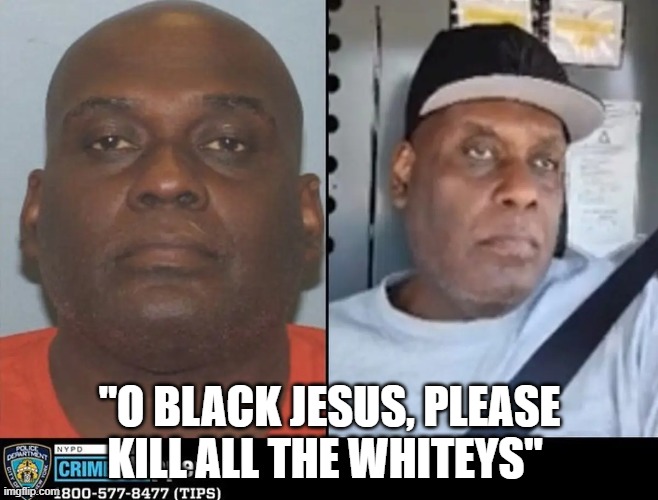 Bet you didn’t hear about that. Kind of changes things, doesn’t it?

You know who Darrell Brooks is? Probably not.

He was the guy who intentionally ran over white people in Waukesha, Wisconsin, killing five. He was a racist who hated white people. Because he was a black racist, the story was disappeared from the left-wing media almost immediately.

Frank James was arrested the other day. He shot ten people on a New York City subway. He is a racist. He hates white people. He hates Jews. He hated Asians. This is a sampling of his eloquence:

There is quite a collection at Notthebee.com

Here’s one of them from Andy Ngo:

Frank James, the person of interest in the #Brooklyn mass shooting, posted a photograph of the Dallas #BLM shooter who killed 5 cops. He also posted a prayer asking for whites to die. One of his videos is titled, “We once were kings.” pic.twitter.com/s97iXfiyBH

You get the idea. As of this writing this story has been erased from Fox News, CNN and MSNBC. CBS makes a fleeting reference to it. ABC does it a little more justice but nowhere is his being a malicious racist mentioned.

Why is that? Why are only white people the focus, even when they weren’t racist or guilty of anything? This is the kind of thing that really destroys one’s faith in the media. This is a legitimate story, and it needs telling. All people want is a fair account of the news.

Meanwhile the media has moved on to Harry and Megan, calling black conservative Herschel Walker a “liar”, and convicting a white cop of killing a black man who fought for the cop’s weapons before the facts are known.

The media in this country sucks.

In order to keep their racist lie of the threat of “white supremacy”, the racist, corrupt left wing media has to lie about any white person involved in an incident to make them appear racist and suppress the truth about black racists, incited by the “historic” lies their Marxist overlords feed them, and the violent racist crimes they commit.

The GOAL is to divide and incite unrest and turmoil.

If the Brooklyn subway terrorist was white with conservative social media posts we'd know what time he was born, in which hospital, and the name of the doctor who delivered him.

But he was a black separatist who hated whites so the story disappeared as I and others predicted.