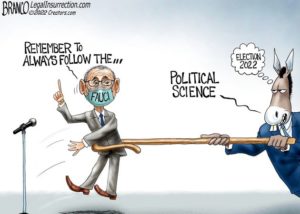 Welcome back to Day 423 of the President Brandon* occupation! We’ll get straight to it:

We don’t have to be over the top and confrontational, but the time for staying politely quiet has passed

Um, is saying this treason? Somebody call Romney for a ruling!

3/12 – KAMALA HARRIS FINALLY TELLS THE TRUTH! TELL VOTERS ‘THEY GOT WHAT THEY ORDERED’ IN BIDEN

Mencken could not have said it better

3/13 – Now Boris maps his way OUT of Net Zero agenda: PM sets up oil and gas taskforce to plot a way out of the energy crisis

When does Teh Radical Left pick up their refrain that we need to follow our intellectual betters in Europe?

As trivial as a feud between celebrities may seem, this points to a bigger cultural issue. And every time I think I can’t dislike Pete Davidson even more, he manages to up himself. Consider yourself lucky if you have no idea who I’m talking about.

Stories like this give me a lot less dislike for the people who choose to throw away their presidential votes on their favorite protest candidate. If I could go back in time I’d never vote for Barry O, but no way would I have voted for Romney or McCain back in the day if I knew then what I know now.

Or more accurately, the obsession of his handlers. Biden* always seemed content to just give young girls creepy shoulder rubs and hair sniffs

I rarely post articles I disagree with, and this is from a site I generally like the American Spectator. The money quote (emphasis mine):

“Republicans should finally do the math and acknowledge they’re outnumbered 2 to 1 by Democratic voters in California,” noted the Los Angeles Times’ fair-minded columnist George Skelton, shortly after the loss. “They can’t win a statewide office without attracting Democrats and independents.… They’re content to merely sound off and squawk about a deteriorating California without jockeying into position to actually do something.”

OK, since Governor French Laundry drove out most of the Normals, how is a Republican supposed to attract the :eftoids who voted for it? A promise for only half as much dung, needles, homelessness, and open crime in the streets?

If current events have you down, this six minute video of some genius level trolling of the Portlandia City Council will put a smile on your face!

If you’re getting tired of reading the great Mencken quote, “Democracy is the theory that the common people know what they want, and deserve to get it good and hard”, I’m getting tired of posting it myself.

ICYMI – I asked the difficult question, Is Joe Biden* a Child Predator?

Two economies in one year. Not bad. https://t.co/FpYW0E60IE

USA Today has named Rachel Levine one of their “Women of the Year.”

She truly worked her balls off in order to achieve this prestigious honor. pic.twitter.com/5K0sS3Q9F5

This whole woman bashing is getting on my last nerve, we are called bleeders, womxn. I know I cant be the only one that doesnt want to be referred to as a bleeder, cant pronounce womxn or be willing to pull a Harding on a competitor with a richard tucked away.

35 % now willing to go all mad max world, do they realize that means no cell phones or flushing toilets? Sure they might have enough TP hoarded up for a couple of years but the tissuemills and technology to make more is gone.

Hey Bob next time you come want to introduce Mrs. Bob just say this is the Bleeder of the house.

Looks like me after seeing Sabbath & Motorhead at The Troc in Philly back in ’94! That would also be the last time I would mosh while intoxicated…

It has also proven useful to take comments out of context or manipulated in order to attack opponents. Those embracing wokism will one day find themselves on the wrong side of it if they ever dare to have their own opinion which differs from the groupthink of the moment.

I kind of thought they sent Kamala because she was the best they had, which is as depressing as it is ridiculous. Giving Kamala more face time to build up her cred simply has the opposite effect, much like having a Democrat majority in the White House and both Houses gives us an overdose of the deadly effects of liberalism.

3/12 – KAMALA HARRIS FINALLY TELLS THE TRUTH! TELL VOTERS ‘THEY GOT WHAT THEY ORDERED’ IN BIDEN

I guess saying “you get what you paid for” doesn’t fit, since the spent billions to shoehorn idiot Biden into office.

3/13 – Now Boris maps his way OUT of Net Zero agenda: PM sets up oil and gas taskforce to plot a way out of the energy crisis

It ain’t rocket science, but it still seems to be well above the heads of Democrats. Some are proposing totally killing fossil fuels. How much is Putin paying them?

In nut vs. twit, who do you cheer for? Hard to pick a side. Like watching the Redskins and Eagles, I hope they both lose (zing).

Maybe they should be carried in cages on top of the car.

3/16 – Joe Biden’s Gender Obsession
I don’t suppose anyone lets the left know that there are ways for a woman to go about gapped open like a $2 suitcase and NOT get pregnant. In a pinch, they could even practice some discretion. As much fun as it might be for them, every sexual act doesn’t have to end with a death.

Republicans can’t win in California until Californians learn what makes their lives miserable.

Well, hell, how can liberals tell if someone IS trolling them? Even a “serious” liberal sounds ridiculous to sane and rational people.

Democrats consider every option to relieve economic pressure on citizens as long as it doesn’t benefit the country or harm their overseas investments.

Only liberals could declare a failed science experiment “Woman of the Year”.

Only liberals could declare a failed science experiment “Woman of the Year”.

I’ll be stealing that one!

We all should know by now allowing any government persons on our land is a bad idea. Of course we wouldnt want to be rude.
Epic!
The State of Washington Department of Fish and Wildlife sends a letter to a home/landowner asking for permission to access a creek on his property to document the decline in a certain species of unheard of frogs.
Home owner’s response –
Dear Mr. Niemela:
Thank you for your inquiry regarding accessing our property to survey for the yellow-legged frog. We may be able to help you out with this matter.
We have divided our 2.26 acres into 75 equal survey units with a draw tag for each unit. Application fees are only $8.00 per unit after you purchase the “Frog Survey License” ($120.00 resident / $180.00 Non-Resident). You will also need to obtain a “Frog Habitat” parking permit ($10.00 per vehicle).
You will also need an “Invasive Species” stamp ($15.00 for the first vehicle and $5.00 for each add’l vehicle) You will also want to register at the Check Station to have your vehicle inspected for Non-native plant life prior to entering our property. There is also a Day Use fee, $5.00 per vehicle.
If you are successful in the Draw you will be notified two weeks in advance so you can make necessary plans and purchase your “Creek Habitat” stamp. ($18.00 Resident / $140.00 Non-Resident).
Survey units open between 8 am. And 3 PM. But you cannot commence survey until 9 am. And must cease all survey activity by 1 PM.
Survey Gear can only include a net with a 2″ diameter made of 100% organic cotton netting with no longer than an 18 in handle, non-weighted and no deeper than 6′ from net frame to bottom of net. Handles can only be made of BPA-free plastics or wooden handles.
After 1 PM. You can use a net with a 3″ diameter if you purchase the “Frog Net Endorsement” ($75.00 Resident / $250 Non-Resident).
Any frogs captured that are released will need to be released with an approved release device back into the environment unharmed.
As of June 1, we are offering draw tags for our “Premium Survey” units and application is again only $8.00 per application.
However, all fees can be waived if you can verify “Native Indian Tribal rights and status”.
You will also need to provide evidence of successful completion of “Frog Surveys” and your “Comprehensive Course on Frog Identification, Safe Handling Practices, and Self-Defense Strategies for Frog Attacks.”
This course is offered on-line through an accredited program for a nominal fee of $750.00.
Please let us know if we can be of assistance to you. Otherwise, we decline your access to our property but appreciate your inquiry.
Sincerely,
Larry & Amanda Anderson.