What happens to those discharged from the military or fired from their jobs once the vax mandates are lifted?

Thousands of workers have been fired for declining vaccination. Mayor Eric Adams has fired over 1400 workers opting out of vaccination.

Thousands of health care workers have been fired for not complying with vaccine mandates. The Mayo Clinic has fired more than 700 for the same. Thousands more have quit rather than be jabbed.

Some states refuse unemployment benefits to those refusing vaccination.

In October Biden said first responders and police refusing vaccination should be terminated. (That’s a pretty stupid policy given how they put their lives on the line when COVID first hit. Biden has never put his life on the line for anything other than money.) That policy blew up in his mummified face.

President Biden is deploying military doctors and health care workers to bolster hospitals amid the spike in omicron variant cases. But in the last few months, thousands of health care workers across the nation have been terminated over refusing to comply with vaccine mandates, leaving health care providers in the lurch with staffing shortages while bracing for more patients.

I asserted that it is the unvaccinated who are at risk from the vaccinated and it is still true.

But what happens to them once this is over?

The same Mayor Eric Adams who fired 1400 workers less than a month ago is ending vaccination requirements for businesses and mask mandates in schools.

The White House and Congress dropped mask mandates for themselves.

Airlines are pushing the White House to drop test mandates for international travelers.

The UK is dropping vaccination mandates.

Vaccination mandates are being dropped by big cities and large companies.

Even Chicago (!) is dropping proof of vaccination demands and mask mandates.

Little by little the truth about COVID deaths is leaking out. Fauci has lied to us for more than two years. The CDC is a confusing mess. The science was never an issue. Politics was the issue used to warp the science and browbeat Americans into submission. Now those Americans are saying enough is enough. It took a panicky letter from Biden’s polling firm warning of a disastrous midterm election result to make democrats change course and begin to follow the science. Biden, naturally, will take credit for the winding down of the pandemic he fought so hard to keep alive.

There were good reasons to be afraid of vaccination. 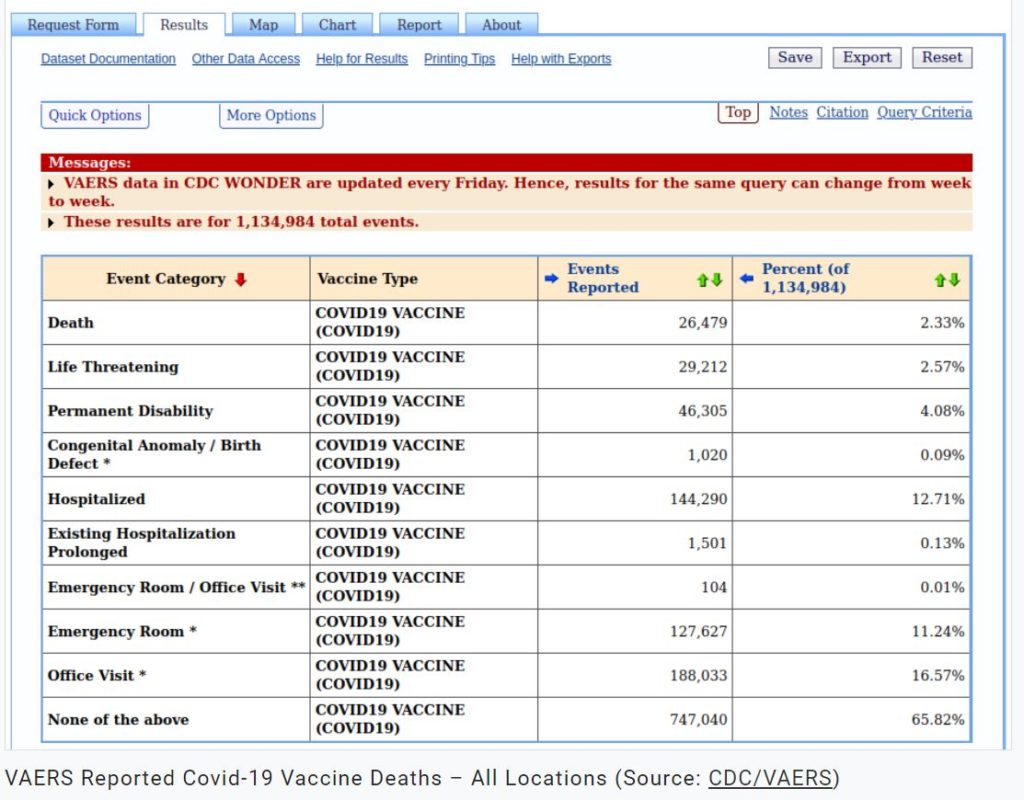 Over 1.1 million people are now reported to have been negatively impacted (or killed) by these experimental covid shots in the past 62 weeks. This is up 1.4% from last week.

This week’s VAERS data also indicates a stunning 26,479 deaths from the Covid-19 investigational vaccines. This is a weekly increase of 1.8% from last week’s report of 26,008. The death rate has typically been growing about 2% each week, so we should continue to monitor this closely.

Further, VAERS reports 46,305 permanent disabilities have been caused by the covid jabs. This is an increase of 2.4% from last week. The system also shows that a total of 29,212 life threatening events have occurred from these gene therapy vaccines.

It’s likely that these numbers are somewhat under-reported. But what happens to those who were punished for refusing to get vaccinated? Who is going to apologize to them? Will the military allow them to rejoin? Will lost jobs be given back?

This is going to prove to be one of the greatest tragedies of the pandemic. Every conflict needs an enemy. The unvaccinated were persecuted for no reason. They were and are a threat only to themselves, and to argue otherwise is to argue that vaccines are entirely ineffective. Vaccines should never have been mandated.

A reckoning is due.

I expect a class action lawsuit from this frivolously persecuted minority.

John Solomon (just the news. com) was suspended from Twitter for posting an article about a peer reveiwed study on the “vaccine”. The court ordered release of FDA data from Pfizer that lists over 1200 different side effects has Top health ministers resigning, you can run but you cant hide.
Its hitting the fan for the jabby. The noble sacrifice of lifting the mandates on masks for stomach turning political points, the sudden rearranging of the science on hospital vs cases but not including kids, who were never ever severely effected.
It was always the hesitant that followed the science, it always led back to the money.
There are millions who regret getting the jab but not many regretting not getting the jab.
The dark winter Biden predicted only appeared for the jabbed.

the moronic pedophile pres and the gay terrorist obama operate under a major intellectual dullness. the structural intellectual matrix of the demorat party has never considered the possibility of catastrophic failure. the fallout in the from of federal suits will be high. the major issue in constructing a plan of action is to write in at each level the possibility of failure of segment fragmentation. FJB and the entire cabinet think with the little head. Anyone who is a strategist would have surmised failure from the firt

most of that will become irrelevant until they need back all the workers who were terminated. there is a catastrophe only beginning to be discovered by researchers in Sweden and other foreign countries. the Mrna vaxx’s do enter the liver and are reverse transcribed back to the DNA according to those researchers. the result will be billions of folks developing an Autoimmune disease causing a new type of AIDS which can’t be stopped or reversed. your immune system is failing and will not protect you from diseases.

Companies that cited the unvaxxed would raise health insurance costs are in for a rude awakening with possible long term disability claims, covering heart and cancer related issues etc.

Well, there’s only one thing for them to do; using the data the CDC was trying to keep hidden, sue the living shit out of the authority involved. I always hate cheering on a lawsuit against anything funded by taxpayer money because the taxpayer (not the idiots making the idiotic decisions) are who pays, but nevertheless, that is the only option (other than just forgetting about it) for those fired for having reasonable doubts about getting the vaccine. And, I hope they do and good luck with it.

The “reset” is in play.
What did all this fake covid jab-or-else do for America’s jobs?
It made it possible to sift out all those capable of free-thinking, leaving only those who do not Question Authority.
If some new people get hired they will also be from among the pool of those who do not Question Authority.
Already, our military is “woke.”
Now we are seeing the medical field populated with gov’t-compliant zombies who will punish the unvaxxed.
Fed, state, city and county gov’ts are also beoming filled with empty, but willing-to-obey minded people.

Recall how the Germans, under Hitler, “just followed orders.”
It is much easier to get that out of workers today because they refuse to think critically.
That’s the end game.

“Newsmax executives agreed to take the money from Biden’s Health and Human Services (HHS) to push only positive coverage of the new COVID vaccines.”

A billion dollars to propaganize Americans thru media.

If you recall, GWBush tried to propagandize the Muslims in Afghanistan and Iraq about the faults of following Mohammad.
He was shot down by our Congress and our propaganda radio and media were shut off.

But only a few short years later propagandizing our own people while knowing these ads were filled with lies and half-truths is approved.

Sue them? Weren’t the ‘JUDGES’ exempt from the jab? Why do you think that was? Perhaps so they’d come down on the ‘correct side’ when the time came?

None of these vaccines have FDA approval. The ones used in the U.S. are all still under EUAs. The Nuremberg Code says coercion or intimidation cannot be used to get anyone to take an EUA drug. So, these people were wrongfully discharged, fired or forced out of work. The federal government (Biden administration and DOD) should be sued. Every soldier that was discharged or retired should be reinstated and those who are suffering bad effects from taking the damn shot should be compensated. You can tell where their priorities lie when you see them doing CRT and transgender pronoun training instead of preparing our soldiers as they should.

They can move to Florida.
https://rwmalonemd.substack.com/p/buck-the-cdc-florida-is-the-land?

I”m sure I’m not the only one who would be proud to have them as neighbors.