The teaching profession has become infested with perverts 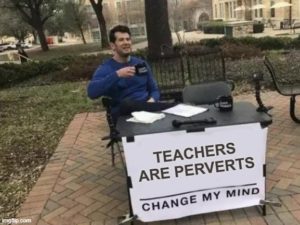 If you leave a small pebble in your shoe and walk on it for a day, it gets sore. If you leave it in for a week and it’ll be painful as hell, and you cannot ignore it any longer. That’s what this thought has been for me. It’s been a pebble in my shoe, and it’s been there for a long time.

The teaching profession is full of perverts

I was pushed over the top by an article in Breitbart today:

Private schools across the country are training teachers to expose kids as young as four years old to sexually explicit content — in secrecy and without parents’ knowledge — directed by the National Association Independent Schools (NAIS) as part of a “queer-inclusive” curriculum.

Breitbart News has reviewed an extensive trove of NAIS documents and teacher trainings supplied to private schools nation-wide, which, under the guise of being “queer” and “LGBTQ+ inclusive,” urge the use of graphic sexual material in classes starting at Pre-K.

…Other “Undercover Mothers” from a different school in a different state shared images with Breitbart News of a similar poster hanging on campus, of a cartoon gingerbread man labeled “The Genderbread Person.” The poster illustrates the difference between “Identity,” “Attraction,” “Sex,” and “Expression.”

The same school — located in Georgia — has a book at the school library accessible to students called, “Gender Queer,” by Maia Kobabe, which includes illustrations of boys engaging in oral sex.

“We are committed to making each member of the community feel that her or his whole identity is acknowledged, supported and appreciated. We believe that an appreciation of diversity and inclusivity is essential to our mission, our goals to serve, lead and flourish…”

Uh-huh. Because those are the basics, rights? Instead of Reading, Writing and ‘Rthmetic we have Reading, Sucking and Vaginaprick.

What the hell has happened to teaching?

The profession has slowly been transformed into something monstrous, but it hasn’t happened overnight. In 2003 this was published

Since then, it’s one thing after another, and I think this one hits the nail square on the head.

Teachers have begun living out their fantasies through their students.

Schools are hosting adult drag queen stars as story readers to children as young as preschool age and justifying the events as consistent with the latest progressive education panacea known as “social and emotional learning.”

“It’s shocking,” Rebecca Friedrichs, the founder of For Kids & Country, said in an interview with The Christian Post when describing the condom relay races 10- and 11-year-old girls have been participating in at schools where, in front of boys, they’re taught how to put a condom on a model of an erect adult male penis.

The president of the nation’s largest teachers’ union joined a man who identifies as a woman in teaching transgender ideology to an Arlington, Virginia, kindergarten class last week.

Lily Eskelsen García, president of the National Education Association (NEA), joined with Sarah McBride, a spokesperson for the Human Rights Campaign (HRC), in reading the books I Am Jazzand Julián Is a Mermaidto young children at Ashlawn Elementary School.

The current rage is pushing children to become transgender

While Idaho is considered a refuge for people fleeing Democrat-controlled areas, a new report shows the state’s supermajority Republican legislature has not protected children from far-left politics in public schools, including state-sponsored racism and hiding transgender ideation from childrens’ parents.

We touched on this before.

It’s no wonder schools don’t want parents to have any knowledge of what “educators” are doing to indoctrinate kids. It doesn’t end there. Do a search for “teacher has sex with student.” I got 57,600,000 hits. One of these was this: 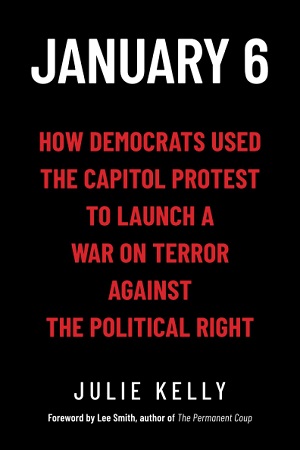 Arizona teacher arrested for having sex with 13-year-old student, once while another student kept watch: Police

Heather Robertson, Texas teacher, had sex with 4 students, 2 at the same time: cops

Florida teacher charged with having sex with student, 15, is now pregnant

This has gotten crazy, but there are some signs of the restoration of sanity. Three woke school board members In San Francisco (!) were kicked out in a recall election.

Teachers must be forced to return to teaching what is appropriate for ranges of age and the focus must be placed upon learning the basics, not sexual indulgences or garbage courses that plague and rot secondary education. If you have kids in school, demand to know what they’re being taught. I think video monitors in classrooms is an idea whose time has come. The perverts need to be weeded out.

They’re YOUR kids. They do not belong to the village. It’s full of village idiots.

The pendulum is going to swing back so hard its going to time travel to the 1800s when teachers had to wear 2 petticoats.

Rules for Teachers in 1872 & 1915: No Drinking, Smoking, or Trips to Barber Shops and Ice Cream Parlors

As a pervert myself, I’M offended at you lumping all perverts together! MOST of us have the common sense and decency to restrict the practice of our perverse pleasure to those who consent!

Instead of educating students, the left is promoting mental illness, actually TEACHING students to be mentally ill. We all knew that “gay marriage” wasn’t the end game. But, you can rest assured that China is not teaching this garbage in their schools and are largely behind this agenda to make America weaker and more stupid.

My Facebook feed is inundated with post about “banning books”, as if a school not wanting certain publications in school libraries is the same as banning the book everywhere. The left is intent on destroying the minds of the youth.

And when parents learn this smut is being forced into the minds of their children, they speak out. Then garland merrick indetifies them as domestic terrorists to quash their free speech. democrats claim parents have no right to be involved in their childrens education. The department of education needs to be defunded and eliminated.

You’re missing a “more” that should be in there. This is all by design, by the way, and the Left has been working on it for decades. Normalizing perversion is all part of the plan, just like the destruction of the family is part of the plan.

99% of these female and male perverts are one can bet Dems. Liberal twits who are amoral and think their ideology protects them from parents and the law.