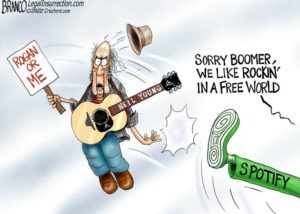 Welcome to Day 388 of the President* “Weapons of War” occupation! Let’s jump right in:

2/4 – What’s It Like to Have Truckers Protesting Outside Your Door?

Brave Sir Justin ran away, bravely ran away away

Yes brave Sir Justin turned about, and gallantly he chickend out

Bravely taking to his feet, he beat a very brave retreat

Bravest of the brave, Sir Justin!

If you’re reading this you already know how the Antifa thugs terrorized a gay asian journalist (and oddly the Legacy Media seems unaware), but it’s far more powerful if you see the short video of it actually happening

2/8 – The Inconvenient Truth About Electric Vehicles

This is why I don’t take Climastrologists seriously. In my years of debvating them I’ve never once seen a serious proposal to actually “solve” the problem.

2/9 – North Carolina Elections Board Says It Could Ban Rep. Madison Cawthorn From Running

This is flat out voter suppression. As much as the RNC would happily watch Dems cull the non RINOs from the ranks, these nimrods better figure out that if they don’t start fighting back now and hard the tactic will eventually get used against the Vichy Republicans as well.

2/10 – How to prosecute Fauci and co. for COVID-related crimes

I’ve wondered about this myslef, knowing damned well that The Swamp won’t go after one of their own, now will the Vichy Republicans controlling the party. This is a long shot, but still a shot.

Remember, in the eyes of the Radical Leftists who’ve seized control of the governemnt, media, academia, etc, bankrupting the US is a feature, not a bug.

Have a great weekend & Happy Valentines’ Day on Monday! And for any of you kids out there thinking of hooking up with your “Ex”, always remember the sagelike dating advice of Enabran Tain: “Always burn your bridges behind you. You never know who may be trying to follow.”

The most busted name in news pic.twitter.com/lT5uLgMmPe