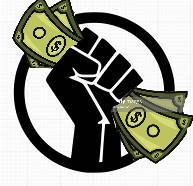 If my children were just now entering school, I’d recommend that they major in racism. It pays really well, and accountability is not required. Everyone will be afraid to confront your malfeasance.

Patrice Cullors, one of the founders of Black Lives Matter, has created quite an empire for herself. The self-described Marxist has done what all good Marxists do- make herself wealthy with the funds raised for the cause. In 2020 BLM raised $90 million dollars.

A report released this week also said that the foundation had $8.4 million in expenses in 2020 and announced plans to share $21.7 million in grants to a variety of leftist activist groups and local BLM chapters.

Patrisse Cullors, the executive director of the BLM Global Network Foundation and a self-described Marxist who formed the BLM national organization with Alicia Garza and Opal Tometi, claimed in a new letter this week that “in July, we paused — for a moment — as we were inundated with a surge of interest, attention, and allies.” She said that “our network of almost twenty chapters at the time came together to ideate something different; an entity and structure that could remain true to the grassroots origins of #BlackLivesMatter.” Garza currently runs the Black Futures Lab and Tometi-founded Diaspora Rising.

As protests broke out across the country in the name of Black Lives Matter, the group’s co-founder went on a real estate buying binge, snagging four high-end homes for $3.2 million in the US alone, according to property records.

Patrisse Khan-Cullors, 37, also eyed property in the Bahamas at an ultra-exclusive resort where Justin Timberlake and Tiger Woods both have homes, The Post has learned. Luxury apartments and townhouses at the beachfront Albany resort outside Nassau are priced between $5 million and $20 million, according to a local agent.

The self-described Marxist last month purchased a $1.4 million home on a secluded road a short drive from Malibu in Los Angeles, according to a report. The 2,370-square-foot property features “soaring ceilings, skylights and plenty of windows” with canyon views. The Topanga Canyon homestead, which includes two houses on a quarter-acre, is just one of three homes Khan-Cullors owns in the Los Angeles area, public records show.

The problem is those raising this money are obligated to be responsible for it and account for it. After scoring the big bucks, the leadership of BLM abandoned ship:

No one appears to have been in charge at Black Lives Matter for months. The address it lists on tax forms is wrong, and the charity’s two board members won’t say who controls its $60 million bankroll, a Washington Examiner investigation has found.

Cullors says she left two people in charge but neither one wants anything to do with that:

Cullors announced in May she was stepping down and that activists Makani Themba and Monifa Bandele would lead the organization as senior executives. But Themba and Bandele revealed in September that they never actually took the job because of disagreements with BLM’s “acting Leadership Council.”

Cullors set up several “charitable” organizations has dipped into them frequently

Bowers served as the treasurer for multiple activist organizations run by Cullors, including BLM PAC and a Los Angeles-based jail reform group that paid Cullors $20,000 a month and dropped nearly $26,000 for “meetings” at a luxury Malibu beach resort in 2019.

Now, BLM is expanding the real estate empire into Canada:

Black Lives Matter transferred millions of dollars to a Canadian charity run by the wife of co-founder Patrisse Cullors, according to a report, which was used to buy a $6.3 million Toronto mansion to house an arts center.

News of the transfer of money to the Canadian group has raised further questions about transparency and accountability within Black Lives Matter – coming days after auditors said an inquiry into the handling of BLM’s $60 million war chest was necessary, and less than a year after Cullors was forced to stand down amid questions about her own property empire.

BLM Canada announced in July 2021 that they had recently purchased a three story Victorian mansion in the Baldwin Village area of Toronto, close to downtown. The imposing red brick house was previously the headquarters of the Communist Party.

The trick to these schemes is to create an organization with a catchy, noble sounding name. Criticism of them leaves one open to accusations of racism. Cullors’ rationale for this profligacy is “I needed to take care of my family”.  She said that reporting on her questionable actions was “white terrorism.”

So Patrisse Cullors is cashing out of BLM with four luxury homes, a book deal and production deal with Warner Brothers. Not a bad haul off the deaths of Trayvon Martin, George Floyd, et al. Her and her wife can now continue their work on LGBTQ issues with their finances secure.

Of course, this is not new. The father of this type of scam is the “Reverend” Jesse Jackson. When he needed a cash infusion Jackson would shake down a corporation, threatening to label it “racist.” Jackson raised millions in this manner. Black Lives Matter is simply the next generation.

The “Marxists” have learned the real lessons of history. Racism pays well.

Investigations begun or nearing in Indiana, California and Washington