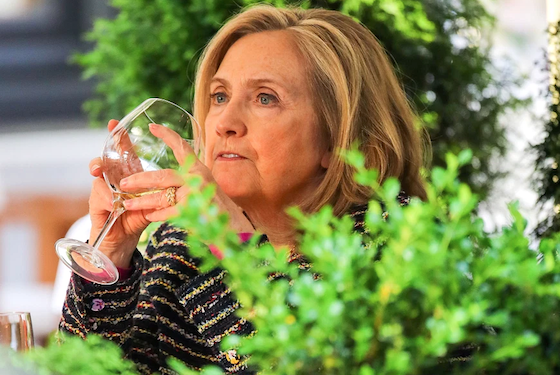 And just like that she’s back. Hillary.  We honestly thought that she was gone, finito, kaput.  As God is my witness, I thought that she had left the building…for good.  But no.  We were wrong.  Recently, Hillary sort of announced, in her cryptic way,  “Hey, I’m still here.  I’m presidential timber.  I can go the distance this time.  I’ll dust off my 6 year old acceptance speech and drag my moth eaten purple pantsuit out of the closet. I’m a contender!” (Cue the Rocky theme song)

Why?  Everyone wonders why.  She is richer than King Midas and can afford to drink expensive wine and to purchase elegant McMansions.  Hillary already lost twice and still experiences trauma from her 2016 beatdown.  Why run again?  I think that the answer is simple.  She is Captain Ahab standing on the quarterdeck of the Piquod. She is determined to set sail again in 2023 to hunt down the illusive Moby Dick of her lifetime: becoming president of the United States. She may have lost a leg (metaphorically) in 2016, but that only strengthened her resolve.  She hated losing to Donald Trump and sees him as the usurper who denied her victory and stole her crown.  Hillary is seething with rage and at this point has no control over her actions.  She is on a quest.  She is filled with a terrible resolve, seeks revenge and will not be deterred from her mission-by anyone.

I think that something else is motivating Hillary.  Joseph Robinette Biden Jr. is the 46th President of the United States.  How did that happen? His election was incomprehensible! Even Obama, who Joe loyally served for 8 years, refused to endorse him.  Obama tried to warn the country that Biden was lacking the right stuff for the presidency.  “Don’t underestimate Joe’s ability to f–k things up. And do you know who really doesn’t have it?  Joe Biden.”  Adding insult to injury, Obama totally humiliated Biden by endorsing Hillary for president in 2016.  That had to leave a mark.

The coup de grace was the election results of 2020.  Biden/Harris supposedly garnered 81 million votes.  Are you kidding me?  Joe campaigned from his basement next to the washing machine.  His running mate Harris was toxic and when Joe did stumble out of his cave to campaign, he couldn’t find enough supporters to fill a 7-11 parking lot. Hillary believed (and still does) that she was the chosen one who should have been president.  Now she can only sip her wine and watch in abject horror as bumbling, babbling, Biden and his merry band of moronic misfits destroy the United States and the Democratic Party in one fell swoop. Hell, those idiots may even start a war with Russia just to create a diversion that will obscure their incompetence! What a revolting development that would be.

More accurately, I think she pursues Moby Beaver, but that’s another story. Putting Jeffery away sent the appropriate message to Ghislaine to keep her trap shut. Hillary feels confident THAT is behind her. More questions about the 33,000 subpoenaed emails she destroyed are not likely to crop up again (by anyone but the opposition, which can easily be buried). No doubt, there’s a CHINESE pee-tape out there just waiting to be alluded to. So, fair skies and following winds, huh?

Well… maybe. Does anyone out there actually WANT this corrupt, drunk, stumbling, whining, brain-damaged bitch? She seems to be a one-hag cheerleading squad. The public is not exactly clamoring for her to carry the guideon. Is she fully remote control like idiot Biden? Is she dependably manipulatable? I doubt it. It would remain to be seen if the DNC decides she is the candidate they want to pick, no matter what the PEOPLE want.

Personally, I say bring her on. The Democrats are not going to get the Election Fraud Is Legal and Encouraged bill and they better hope there is no remaining COVID to use to excuse their vote-by-mail-sans-verification, drop boxes sans verification, vote harvesting and observer-herding tactics because then they have an even BIGGER political problem. Hillary looks at the massive wave of fraud the left was willing to employ to put that drooling idiot in office and wants some herself; they didn’t use nearly enough in 2016. And Hillary will still need to suck up and kowtow to the Squad, which is exactly what is killing the Democrat party. Let’s f**king do this! 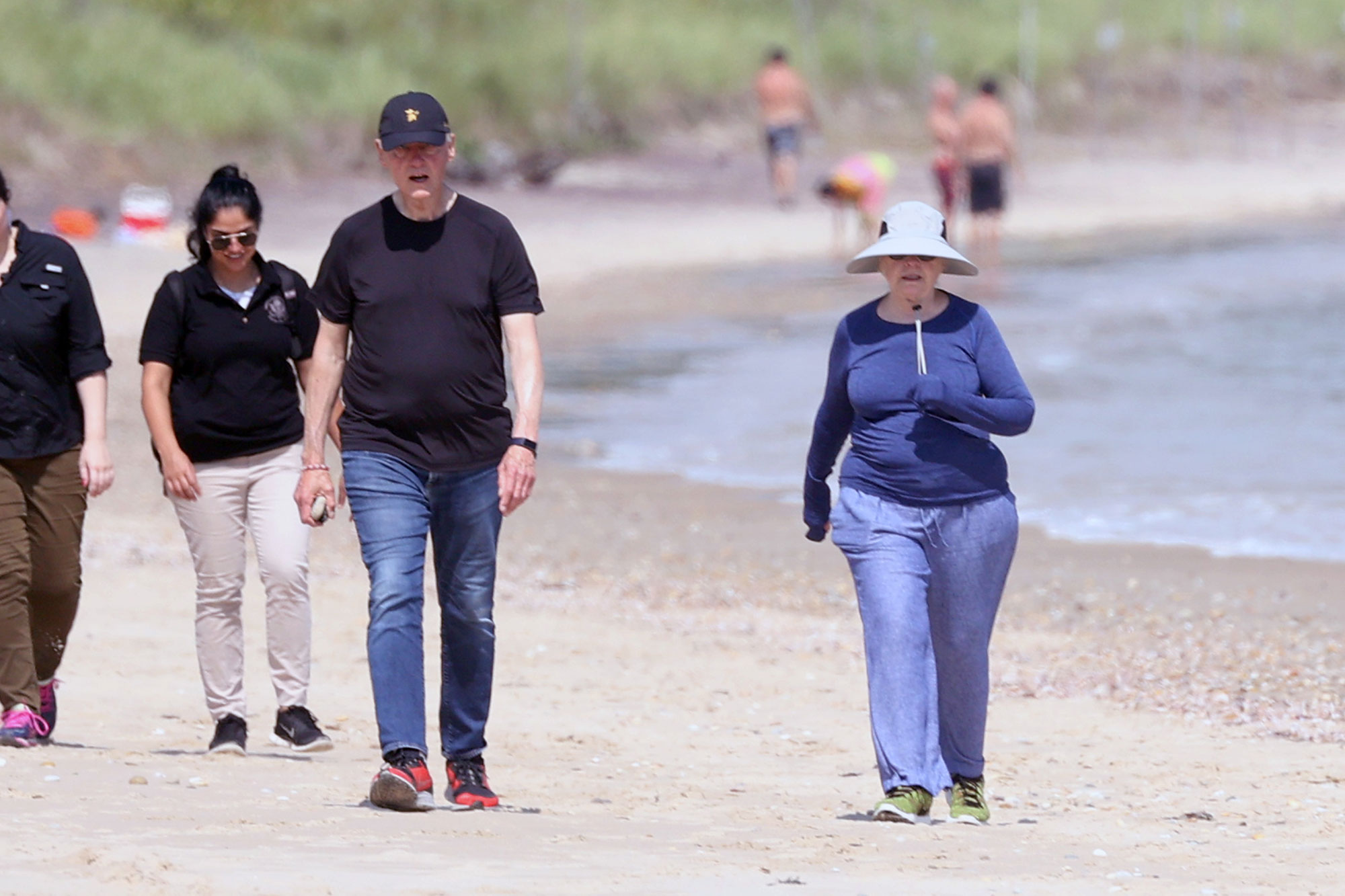 Hillary also uses going public as a ploy to try to deflect from anything bad that might be breaking that can hurt her.
Think Epstein and/or Durham.
Of course she might be meaning what people are implying: that she’s going to run again.
But she blusters in public to fool some of the people into beliving no one guilty would have the moxy to act like that.
However, her record shows she is one of that rare breed who does exactly that.

I think she may want to wait til those 8 names are released from the sealed files of the Maxwell pedo trial.
The coat tails she rode on are now an albatross. Her last ducking the press campaign the scooby van just wasnt large enough for the liquor required.
The shift in party preference may indicate voters are done with really old democrats that cant do steps.

had a gay muslin terrorist for a pres., a career pedophile and now a fat ass, drunk,lesbian allegedly waiting in the wings. she did recently teach a masters class in ny:

CHAPPAQUA, NY—Meet your instructor! MasterClass has announced its latest expert tutor, Hillary Clinton, who will teach a series of lectures about how to lose presidential elections.

“We are honored to welcome Hillary Clinton to our world-class lineup of instructors,” said CEO David Rogier. “She is one of the world’s foremost in losing so thoroughly and embarrassingly, having lost her presidential races every time she’s tried. And now, you will learn how to lose your presidential runs every bit as catastrophically as she did!”
MasterClass has several more Hillary Clinton classes in the works, including:

Rogier hopes this will empower a new generation of young progressives to ruthlessly pursue power at all costs.
In related news, Donald Trump has announced the release of his very own MasterClass, entitled “How to Never Do Anything Wrong, Ever.”

The was a poll out yesterday where just 28% of Americans say they want sleepy joe to run for reelection in 2024, including only 48% of Democrats.

Why We Question Biden’s Cognitive FitnessIf the highlight posted earlier provided the essence of Biden’s dumpster fire of a press conference yesterday, this exchange taken from it sums up his cognitive condition:

James Rosen: Why do you suppose such large segments of the American electorate have come to harbor such profound concerns about your cognitive fitness?

Joe Biden: I have no idea.

Seriously, that was the full extent of his answer.
The Obama/Biden Administration had it in for James Rosen to the extent it had the weaponized Injustice Department collecting his phone records and tracking his movement. Rosen has just signed himself up for more of the same or worse.
In case Biden didn’t answer the question to your satisfaction, Mark Dice provides a more elaborate response:

James Rosen: Why do you suppose such large segments of the American electorate have come to harbor such profound concerns about your cognitive fitness?

Joe Biden: I have no idea.

How would idiot Biden know? He’s demented. Look at how much effort is required just to repair the damage cause by just one of his stupid statements, that “minor incursions” won’t be looked at the same as an “invasion”. This clown is the ultimate disaster. Hopefully there will be enough of the world left when he is kicked out to rebuild.

I think Hillary would love nothing better than a Moby Dick

Especially if it was a strap-on worn by humma wiener