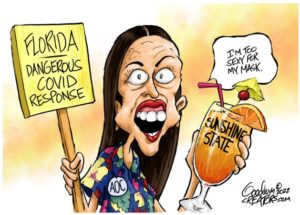 Welcome back to Day 360 of the Brandon* Occupation! As we approach the end of year one of America’s first Dementia  -Awareness presidency, where is the country right now? Let’s take a look:

Yeah, I know, where have these nimrods been for the last two years? But when even the Dems’ PR machine is being forced to acknowledge reality that’s a good sign

And the media yawns

Maybe we need to start isolatibg the vaxxed?

I am actually impressed with the creativity the Dems are using in their plans to steal the elections in ’22 & ’24 – when your policies are so disgusting that the Normals are voting en masse against them, you simply take away the option to vote against them.

I just wish that Democrats would keep their recycling efforts to paper, glass, plastic, etc. instead of including bad ideas

I disagree. Not with the one reason given, but look at how the Dems have been laying the groundwork. On one hand, they’re thowing everything in the kitchen sink to legalize voter fraud, while on the other hand warning of the illigitemacy of any election that they fail to win. And you know that Hillary has got to be seething that the decaying heap of organic matter occupying the White House could get installed why can’t she?

The sad part is, the agendas aren’t so hidden anymore

And be sure to watch the video below – not all heroes wear capes. I’m moving away from Twitter & will probably start just posting GETTR links, even if they don’t embed like Twitter does. This one is worth an exception

Ladies and Gentlemen, Parents and Patriots, we have a new Hero. Take note and follow suit👇🏻🔥 pic.twitter.com/lVXu2Hu0Dx

Leftist Teacher Charged for Quarantining Her Child in Car Trunk
Simple solution for leftists is to mandate proper child restraint systems in the trunk of every hybrid or electric vehicle. The only down side is the arm rest that flips down must be sealed so the kid cant ask are we there yet?

Hmmm… I do see the benefit for road trips!

Uh oh. Have they admonished themselves for “misinformation” yet?

Well, you know… there’s nice, righteous violence upon sacred institutions and there’s the naughty kind, incited by leftist agents and exploited to the max. Now, I do recall leftist outrage… that Trump went to and spent 30 minutes in the bunker, calling him a “coward”. It was a knee-jerk (heavy on the jerk) response to criticism of idiot Biden hiding and staying in his basement throughout the campaign. But, of course, we know Biden was behind all the violence, inciting it with “You know… the thing”. Everyone knows that’s how organized crime members speak when planning crimes and they are worried about surveillance.

Has anyone considered just mandating no one get infected? Then the sick could just be arrested.

There was a problem with your link, but I found this:https://www.washingtonexaminer.com/opinion/op-eds/exposing-marylands-partisan-zuckerberg-funded-2020-turnout-operation
Democrats never tire of their public proclamations of piety even as they violate every “principle” they pretend to hold. Their law legalizing election fraud may fail, but they will still make every attempt to steal elections.

So, every Democrat who supported BLM and/or ignored ANTIFA violence can be disqualified. This would also apply to any Democrat the publicly supported the “Russian collusion” known lie or either of the illegal impeachment efforts. That was all sedition.

Democrats only want justices that are dependable, like Sotomayor, to tell any lie necessary to promote the leftist agenda. Those who, regardless of affiliation, will use the Constitution as the sole guide, need not apply.

Yeah, but… isn’t it her turn… again? I can think of nothing I would like better than another campaign of her falling down steps drunk and roping pesky (yet fully dedicated to her cause) media away from her. The debates would be delightful. Yeah, investigating a candidate is trying to affect the outcome of the election, no matter how overt and far back her criminality goes. Only Trump can be constantly investigated without any such motives.

It is totally possible that no report on deportations has been submitted because they are too incompetent to compose one. But without argument, the left is intentionally swamping the country with illegal immigrants. It shows just how “dangerous” they regard COVID, for it matters not how many carry the virus and spread it. Using COVID relief money so the costs of illegal immigration can be hidden only further emphasizes how dangerous the Democrats’ trillion dollar pork bills are to the country; they simply provide them with a flood of unaccountable tax dollars to play with. Democrats take great glee in using taxpayer dollars to subvert their very rights and freedom. Democrats call the “replacement theory” racist, and we know anything they denounce as racist is usually just what they are up to.

Well, definitely more effective than slapping a mask on them. But what if she’d had a flat?

Tell us again how the demokrats aren’t Communists? This is the mindset of a group of people who would gladly murder millions to instill their will on others. Their ideology has already led to the murder of 100 million people throughout history. This is more proof that they would be more than happy to add to that number.

Tell us again how Trump isn’t an effin’ idiot. Tonight in Florence, AZ, Trump was backdropped by a wall of black guys wearing white tee shirts proclaiming Blacks for Trump 2020.com. So, you click to enter, and find yourself here. Hey, Trump has a Big Tent! All forms of crazy are welcomed to enter!

Watching it now there are 6 Black men, 3 women only 2 I see that perhaps due to supply chain issues couldnt get a new shirt. Damn cant you ever tell the truth?
What ex President gets that kind of gathering? The freak occupying the office cant get a crowd even with a faded rockstar has been on the stage. So was CNN chasing them down giving them We’re Dying… um Blacks for Trump and Save America and MAGA hats? Looks like the one in the suit and tie might be S.S.he scans the crowd alot.
Ok see them as Trump exits the stage the shirts look cheap (see thru)and brand new.

Many minorities saw the Democrats for the manipulating, enslaving, using liars they are and supported Trump in record numbers. Probably were responsible for Trump’s victory, which was stolen through fraud.

The largest venue available and filled to overflowing, police turning back people lined up in cars over 4 miles back on 3 converging highways. People in RVs BBQ tailgaiting for 2 days, to get a seat. Trump supposedly lost AZ.