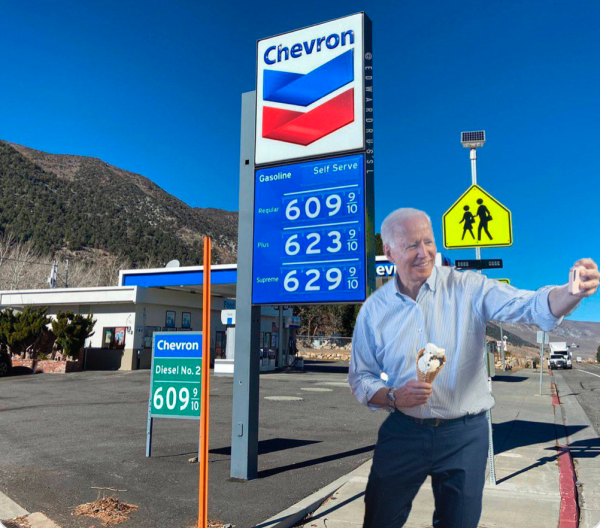 Inquiring minds want to know how Joe Biden garnered 81 million votes in 2020.  I voted for Trump because he was smart, courageous, loved the country and had extensive economic expertise. Trump graduated from the school of hard knocks and actually built something.  Hidin Biden campaigned from his  basement, sitting next to his furnace while folding clothes. The rest is history and apparently, I underestimated Biden’s value to this country.  Behind his persona of bumbling, incompetent, incoherent, buffoonery, Joe magically addressed the nation from his fake office in the fake room with the fake windows.  The president offered these pearls of wisdom to all of us ignorant morons who wonder why car prices are so high. Biden said:

Been doing this a long time. If car prices are too high right now, there are two solutions.  You can increase the supply of cars by making more of them or reduce the demand for cars by making Americans poorer.

That is pure genius and America should thank sleepy Joe for choosing option B-making Americans poorer.  One thing that Biden has achieved after 50 years in politics is a Doctor of Philosophy degree in making poor decisions.  Joe abandoned 85 billion dollars of sensitive military equipment in Afghanistan and then vaporized a beautiful family of 10 with a $75,000 Hellfire missile fired from a Reaper drone. (oops)  Americans are poorer because 2 million illegal, sick, unvetted, illiterate immigrants have poured into our country through our wide open southern border. Kamala was tasked to fix that mess but she is pouting because Biden apparently is “giving her all of the crappy jobs.” Americans are now on the hook financially (estimated yearly cost 8.8 billion dollars) to feed, house, educate and possibly incarcerate our ‘invited’ quests. Kamala Harris missed a golden opportunity.  When tasked with the border job, she should have immediately ordered the remaining gaps closed using the materials already purchased by President Trump.  While Joe was eating pancakes Kamala could have confronted him, cackled and said, “There Joe, fixed it for you!” Now that would have made me laugh.

While we are thanking Joe for making us poorer, I have to mention the pain of rising energy costs.  I just received my natural gas bill for the month which was higher than Hunter Biden smoking crack. (Come on, that’s funny.  We need to find something to laugh about.)  Speaking of laughing, do you think that sleepy Joe is aware of the current price of gasoline?  I guess that he used pixie dust flying to Rehoboth Beach 35 times in his electric/solar/wind powered helicopter but in the real world, honest, hard-working Americans need to drive to work. Biden has definitely made Americans poorer and we ain’t got no stinkin helicopter.  Gasoline pumps now display two things that I have never seen: 1) A picture of Biden pointing up to the price of gas and saying, “I did that!”  2) An automated external defibrillator (AED) attached to the pump to be used when sticker shock causes a heart attack.  Biden did that too.

The good news is that the crack team of Biden/Harris has another three years to make Americans even poorer.  If Biden really puts his back into it, we may be talking a full blown depression by the year 2023. My mother, Betty, survived the horrible 1929 depression and she became the poster child for frugality.  I once tried to throw out an almost empty jar of jelly and mom said, “What are we the Rockefellers? Pour some water in that jar and you’re good to go!” Thanks mom and thanks to Biden for making Americans poorer.  We may need Betty’s advice sooner than we think.

People used to make fun of my frugality when we were saving toward an early retirement.

I never did the jelly trick because I would buy restaurant jam/jelly packs that were each one serving.
I never bought ready-made chicken, preferring to cook a whole bird then plan two or three meals around it.

My parents also got thru the Great Depression.
Dad told the story about how he’d make a farmer out in his field mad enough at him to throw turnips or onions at him. He’d collect the vegi take it to his mom then they’d live on it for a few days.
After he was married and had put decades past those hard days, he still would not allow turnips in the house. He refused to eat onion soup, too.

One economist is warning that we may be headed toward a depression. I remember my mom saying that if a depression hits us again, the first business that will go bankrupt is The American Doll company. For some reason I always thought that was funny.

This has been done intentionally. All of the actions taken by this illegitimate pos are not the actions necessary to maintain or grow an economy. More than 70% of recently polled individuals believe the country is on the wrong track.

We are headed for a depression. The DC power structure is evil and not pro America or pro American.

We may need Betty’s advice sooner than we think.

Good advice at all times. My wife and I still humorously repeat my mother’s frequent direction when putting a little water in an empty can or jar, swishing it around, pouring it into the pot and stating, “I get all the goodie out” or “I don’t waste NOTHIN’!”

For instance, that idiot Granholm, idiot Biden’s energy secretary, doing the Kamala laugh when asked about rising energy prices. She cackled that she wished she had a magic wand to solve the problem, apparently unaware that the solution is almost that simple; jut do the opposite of what they think should be done.

I know there must be a Democrat somewhere that has lived in the real world; I wish they could influence those elitist bubble-dwellers they elect

The most recent Economist/Yougov poll has some brutal numbers for the illegitimate biden. Only 26% of respondants think the country is heading in the right direction. 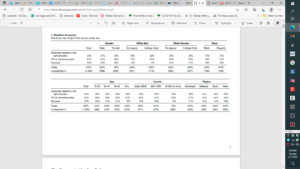 This tables show the responses to the state of the economy. Only 4% rate it as excellent. Over 70% rate it as fair, poor or don’t know. 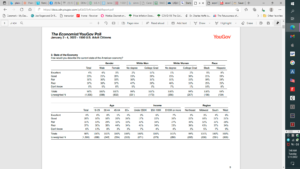 This last tables shows the responses to the question of personal finances over the past year. When asked if your are better off now than a year ago, only 13% of white women without a degree responded in the afirmative.

Despite the mainstream media hysteria over the Chinese coronavirus, a new poll shows that a broader swath of Americans continue to care more about inflation and other more direct economic issues.

As reported by the Washington Free Beacon, the poll was conducted by the Associated Press and the NORC Center for Public Affairs Research throughout the month of December, with its findings released on Monday. In the poll, 37 percent of Americans believe that the coronavirus should be the government’s top priority in 2022. Last year, that number was 53 percent.

Conversely, 68 percent believe the economy should be the top focus instead. Of those 68 percent, 14 percent specifically named inflation as a major issue; last year, only one percent of respondents worried about inflation, which has since risen to a 40-year high under Joe Biden’s watch.

Perhaps no other issue has more negatively impacted Biden’s approval ratings than the rise of inflation, which has led to historically high gas prices all across the country, as well as the average price of goods also rising. After his “honeymoon period” with the voters and the press was brought to an end by the disastrous withdrawal from Afghanistan, the ongoing economic crises – including inflation, the supply chain crisis, and multiple consecutive months of disappointing jobs reports – have continued to drag his numbers down to unprecedented lows.

His lowest approval ratings thus far have been in the mid 30s, with at least two major polls showing him at just 36 percent approval, even lower than President Donald Trump’s approval ratings. Last October, a poll conducted by Politico and the Morning Consult saw 62 percent of respondents blame Biden for the inflation and other economic woes.

These and other trends appear to indicate a coming landslide for the Republican Party in November’s midterms; as a result, over two dozen Democratic members of the House of Representatives have announced that they will not seek re-election this year.

And that 26% WANT the country to tank.

This is selectively edited to change the meaning of what Biden said.

“That’s the choice,” he continued. “Believe it or not, there’s a lot of people in the second camp. You hear them complain that wages are rising too fast among the very middle-class and working-class people who have endured decades of stalled incomes.”
Biden added: “Their view of the economy says the only solution to our current and future challenges is to make the working families that are the backbone in our country poorer or keep them in the same state they were in. >>It’s a pessimistic vision, and I reject it.<<”

So, Biden was in fact saying that republicans want to make American poorer, And those republicans are passing around disinformation. What a shock.

Idiot Biden was saying Republicans want to make Americans poorer while he is actively doing it. What a shock. Idiot Biden blames energy produces for rising energy prices when he destroyed infrastructure pipeline projects, cut leases for exploration and production and made the US reliant again on foreign energy sources, driving prices up. What a shock. Idiot Biden blames meat packers for higher food costs when his energy policies, paying people not to work, environmental edicts and his supply chain collapse is what drives prices up. What a shock.

“Energy prices will necessarily skyrocket.” It is a Democrat agenda.

In other words, idiot Biden, the befuddled puppet of the leftist elite, has destroyed the economy, opened our border, ended energy independence and killed the labor force but blames everyone else for the results. What a shock.

“Their view of the economy says the only solution to our current and future challenges is to make the working families that are the backbone in our country poorer or keep them in the same state they were in.”

Trump literally fixed this, and gave the poor more earnings, work, and a better quality of life.

That’s the real reason they had to rig the election. Trump was doing what they keep promising to do.