Merry Christmas from the White House! 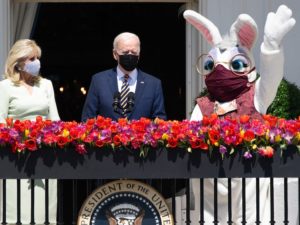 You’re All Gonna Get Sick and Die This Winter!

Whenever Biden and his bumbling band of ‘advisers’ make another moronic announcement, this story comes to mind.

Once upon a time, a liberal politician was giving a speech on a farm in a red state.  The audience was composed of Bible reading, God loving, gun owning, patriotic Americans.  Hillary knows them as depolorables and Bette Midler recently referred to all West Virginians as, “poor, illiterate and strung out.” Poor Bette.  Life is hard and even harder if you’re stupid.

The politician was nervous, and the crowd was rather large, but they seemed friendly and warmly shouted HOZENGA which mollified his fears.  He spoke of his accomplishments as his first year in office drew to a close.  The crowd roared HOZENGA! Emboldened by their enthusiasm, he promised to never raise taxes but instead vowed to reduce spending. The crowd was now on its feet yelling HOZENGA! He further promised to reduce crime, increase funding for the police, and make safe neighborhoods a priority for his administration.  The crowd went wild and screamed HOZENGA at the top of their lungs. He triumphantly left the stage and as he was walking back to his limo, an aide stopped him, pointed to the ground and said, “Hey, boss, don’t step in the hozenga.”

Southern border completely open. Illegal, sick, illiterate, unvetted immigrants have invaded our country and were clandestinely stashed in red states in the dead of night. HOZENGA!

COVID is killing record number of human beings across the globe. HOZENGA!

Inflation is rising, government spending is out of control and fear has become the norm. HOZENGA!

We will soon be forced to buy $60,000 electric cars, 1,000 foot extension cords and pray that our electrical grids don’t explode and burst into flames. HOZENGA!

We abandoned Afghanistan, gifted the bad dudes with 85 billion dollars of sensitive military equipment (oops) and left American citizens in the hands of the terrible Taliban. HOZENGA!

We vaporized 10 beautiful members of an Afghanistan family with a drone missle strike and couldn’t find anyone to blame. Hey, they looked really hard. HOZENGA!

We stopped politely asking Americans to take 2,3,4, COVID jabs and are now threatening, demanding and forcing compliance.  YOU WILL COMPLY. RESISTANCE IS FUTILE. The Democrats stole a page right out of the antagonistic alien group Borg handbook. HOZENGA!

Actually, our government under King Biden and his minions remind me of the Borg:  You will be assimilated!

We threw God out of America (we used to be one nation, under God) and now the Satanic Temple is proudly displaying a ‘baby baphonet’ at the Illinois Holiday Capital building. DOUBLE HOZENGA.  NO, TRIPLE HOZENGA!

Slow your burn and lets talk about some good news!

God is in Heaven and hears the prayers of all the patriotic Amerians in fly over states begging for a miracle to end the toxic Democratic dumpster fire currently ablaze in the White House.

2022 is right around the corner and the midterm elections are coming into focus. RINOS and Democrats in office are panicking and jumping ship.  Numerous incompetent dinosaurs currently holding political office are heading for the exits.  Good riddance.  They have done their worst to destroy America and their treachery will never be forgiven or forgotten.

God may bless this nation with the legitimate re-election of President Donald Trump in 2024.  Trump will return with a vengeance and a mandate from the masses to finish what he started in 2016.  Declaring war on the Deep State would be a great start. 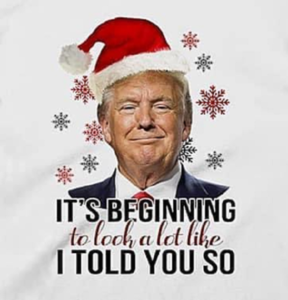 Greg Gutfeld, co-anchor on Fox’s The Five, declared that the entire pandemic and fear mongering will officially terminate on February 1, 2022.  It’s about time that someone informed us when this insanity will end.  Jessee Watters, co-anchor on Fox’s The Five, recommended that everyone wish family, friends and liberals a very Merry Christmas this year.  Great idea. Bill Murray in Scrooged said it best:

It’s Christmas Eve…it’s the one night of the year when we all act a little nicer, we smile a little easier, we…we cheer a little more.  For a couple of hours out of the whole year, we are the people that we always hope we would be.  It’s a miracle.  It’s really sort of a miracle because it happens every Christmas Eve. 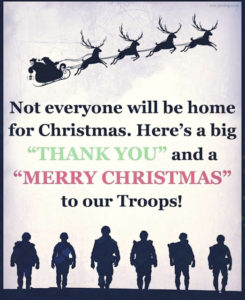 Historically, when statues come down and an usurping political party rigs an election install a dictator, you never get your democracy back…at least not without a fight.

All the typical markers of a totalitarian regime exist with the Biden occupation.

Tomorrow is Boxing day forget this Kwanzaa load of Malarkey since its a total,y Fake African Celebration

It’s Christmas. If you are living in the United States under a Democratic president, that doesn’t mean wishing the American people ‘Merry Christmas.’ Or messages about the sacred Christian holiday celebrating the birth of Jesus.

What it means are hyper-politicized messages that seek to hijack the holiday and put it in the service of the left’s radical agenda. In 2021, that means dragging out the Covid pandemic and bullying Americans into getting a “booster.”

A “booster,” in case one hasn’t noticed, is a tacit admission of failure. It is a silent concession that the “vaccines” that were once touted as “100% safe and effective” have failed to stop infections and the spread of Covid-19 variants.

That isn’t to say that there may be no place for them for certain at-risk people. They act as one set of a number of health tools, such as therapeutics, vitamin D, and exercise, which people can also turn to in order to lower their risk.

The White House, however, believes otherwise. Only the “vaccines” matter. Even if you’re young and healthy and statistically at 0.00005% risk (literally) from Covid-19. And that’s where the cringe, dystopian videos come in.

The most infamous of these recent videos was the White House’s “dancing nurses” video, featuring a cameo from none other than Joe Biden and “doctor” Jill Biden.

One of the creepiest aspects of the video is that the lead nurse is singing maskless while a maskless Jill Biden look on, and the minority and female nurses are having to put this production on with their faces covered.

It gets even more Orwellian. These nurses are dancing in the midst of a purportedly dire pandemic. They aren’t attending to patients on their death beds or administering oxygen to people whose lives are at stake. No, they are dancing and singing bad show tunes. Doesn’t exactly scream urgency.

But the darkest aspect of the White House production is who is not in it: Hundreds and hundreds of medical professionals that the State of New York forced to be fired ahead of the Christmas holidays because they refused to get a jab that doesn’t “stop the spread.”

That’s right. These nurses are from Northwell Health: One of the biggest medical networks in the State of New York.

“These are employees of Northwell Health, which just fired 1,400 unvaxxed healthcare workers due to the Biden Admin’s OSHA rule,” Jordan Schachtel wrote.

“Those dancing nurses at the White House work for Northwell Health, who fired 1,400 nurses for defying the [vax],” Lesli Bless pointed out. “Those 1,400 also worked last year during the pandemic.. What a degrading thing to do, in the face of lost jobs which were just as important as these [clowns].”

“These nurses are from Northwell Health, New York’s largest healthcare provider, a hospital group that collectively fired 1,400 staff members who refused to get vaccinated,” Mike Carter weighed in. “This routine was filmed as many hospitals around the country face nursing shortages bc of vax mandates.”

“Nothing says ‘DEADLY PANDEMIC – HOSPITALS OVERWHELMED, LOCK IT ALL DOWN!’ quite like the cringe nurse choir taking time to learn a song and dance and perform at the White House for their regime masters,” Benny Johnson opined. “Straight out of North Korea.”

It wasn’t just conservative critics who noted the production was clueless and tone-deaf. The New York Post reported on medical professionals who thought it was the wrong kind of message: An unserious one.

“Video of the Northwell Health Nurse Choir’s performance of ‘We Need a Little Christmas’ spread across social media after the White House ‘Spirit of the Season’ special aired Tuesday night on PBS,” the Post reported.

“Why are a group of health care workers singing indoors in a #pandemic? Why are some of them unmasked? People have tested neg then pos within hrs,” tweeted Dr. Tanya Michelle Prowell, an associate professor of oncology at Johns Hopkins Medicine. “This spectacle defies all common sense. #OmicronIsAirborne. Stop it & HELP #MedTwitter & #NurseTwitter. @POTUS @FLOTUS @WhiteHouse.”

Amazingly, this was not the only “cringe” White House production in the run-up to Christmas touting the shots. Here is a Christmas carol about boosters from Pentatonix that surely convinced no one to get the next round of vaxes.

As the icing on the cake, Biden did a weird production with the Jonas brothers plugging the jabs.

“The Jonas brothers’ TikTok collaboration with President Joe Biden is falling flat,” the Daily Mail reported on the video last week. “Their ’embarrassing’ vaccine promotion video, which promotes getting the COVID-19 booster, had Twitter users insisting that ‘nobody’s laughing’.”

“Biden, 79, acts as a cameraman in his new gig with the superstar brothers, lip-syncing to a viral Sidetalk video – an Instagram show where the hosts interview New Yorkers – where Biden’s last name is incorrectly pronounced ‘Byron’ and the Jonas brothers ask what ‘dinner plans’ the president has.

Lest Americans need to be reminded, Tik Tok was initially developed by the Chinese as a data-gathering instrument of the communist party.

Most disturbing of all, the White House’s full-court press for the ‘vaccinations’ does not appear to come from a place of legitimate concern for the health and well-being of the American people. The government officials behind the push do not recognize basic medical facts, such as that over 150 million people have Natural Immunity and thus don’t need the ‘vaccines,’ nor that they do nothing to stop the spread and therefore are not a matter of “public health.”

There is no real mentioning of therapeutics. There is no appreciation that children are at virtually no risk. It is bizarre.

If the White House was simply honest about the mRNA therapeutics, the people most at-risk would get them. Then again, between 90%-99% of elderly in many states have already taken them. That’s a significant accomplishment, but it’s not enough for the Covid vaccine-pushers.

The bottom line is that the Covid “pandemic” is effectively over as we move into a case surge from “generally mild” Omicron, which is comparable in many aspects to a severe Common Cold.

But don’t tell that to the nurses and medical professionals who refuse to let Covid go. That might cause them to stop being the center of attention for a moment, thus allowing us all to get back to our actual lives. Who is going to do cringy Christmas musical productions pushing the jabs, then?

Wow, just wow, how embarrassing! Faggots and lesbian nurses dancing around, that is so inspiring, Not. This is an obama WH stunt. This is the type of debauchery we saw in the obama admin…