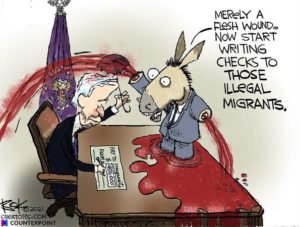 Welcome back to Day 304 of the President Flatuence* occupation! It’s hard to believe that we’re less than a week away from Thanksgiving – where has 2021 gone? And of course, Thanksgiving is what Mark Steyn once referred to as a uniquely American holday. Think about it, it has all of the basic elements that make it the perfect American holiday – gratitude, family, love for our country. WHich makes sense why Lefties despise it! Let’s get on to what nobody should be thankful for:

This news just put the “Welcome Back, Kotter” theme song running through my head, only replacing “Kotter” with “Carter”

Eat it, peasants. If you don’t like Homeless in your neighborhood just be as wealthy as Newsom or Pelosi & hire your own security.

11/14 – When mutiny is the only honorable choice

Wow – We actually have documented seven of these stages. I’m old enough to remember when that number was zero.

11/17 – A MODEST PROPOSAL FOR THE CAMPUS DIVERSITY-INDUSTRIAL COMPLEX

In normal times I would approve of a proposal such as this. But we’re way past normal – we should be shifting the conversation to declaring these Diversity departments to be hate groups, en route to having them defunded and eventually banned

11/19 – Don’t Ask About Empty Shelves, Our Leaders are Too Busy Saving the World

I’m still waiting for some Lefty to explain to me how taxing the poor grants bureaucrats the power to control the weather.

And from the archives, it’s time for my annual repost – Your One Stop Guide to DESTROYING your Democrat relatives at Thanksgiving! The post may be five years old, but it’s aged surprisingly well – you’ll want to commit each response to memory.

Have a great week, and Happy Thanksgiving!

Imagine he’s stroking a white cat in his lap. https://t.co/21uZnzvlBs

I see the odds as, I have a 99% chance of surviving Kung Flu, and 100 % chance of having no deadly side effects if I refuse the real bio weapon jab. Viva Las Vegas! (ZZtop rendition)
Everyone have a fabulous Thanksgiving.
I have to pack ‘er up for deer camp. Someone has to make sure the chilis hot and the beer is cold.
FFS now I have to spray carcasses with Lysol? nah its fake news. https://www.cnn.com/2021/11/17/health/covid-deer-animals/index.html
Rabbit hole alert.
I have my own conspiracy theory how the deer got infected https://www.geoengineeringwatch.org/category/geoengineering/atmospheric-spraying/
Im kidding of course….

“100 % chance of having no deadly side effects if I refuse the real bio weapon jab. Viva Las Vegas! (ZZtop rendition)”
Awesome – I was thinking more of The Dead Kennedys version…

If we don’t chat before next Thursday have a great Thanksgiving!

I was thinking more of The Dead Kennedys version…
Dead? did they take the Dr. Evil’s jab? 😉
The verdict for Rittenhouse is about to be announced .

“11/11 – Group Biden Removed From Terror List Storms U.S. Embassy in Yemen, Takes Hostages (H/T Mully)” This moron really has it all together, huh? Maybe idiot Biden needed to make room on the list for “Parents That Care About Educating Their Children and Don’t Like Them Being Raped At School”.

“11/12 – ‘The Police Don’t Actually Come’: SF Residents Witness Untold Horrors Living Next to Huge Homeless Encampment” Why do people who pay a LOT in taxes continue to vote for this stupidity? Maybe Joy Reid can explain to them how paying exorbitant taxes to have demented homeless people shit on their porches and threaten them is a GOOD thing.

“11/13 – Liberals Triggered By Rittenhouse Trial Judge “God Bless The USA” Ringtone” You can bet the left would regard someone that expresses some sign they love their country to not be on THEIR team. But wouldn’t you expect a judge that actually enforces the law of the land to be a dedicated patriot?

“11/13 – Mother of Kyle Rittenhouse Utterly Wrecks Joe Biden For ‘Defaming’ Her Son Using White Supremacist Rhetoric” She can be expecting the IRS to be contacting her soon. I hope her returns are high and tight.

“11/14 – Biden’s Banking Chief Nominee Wants to Eliminate Your Private Bank Account” It seems to be a priority to those who are making idiot Biden’s decisions for him to only nominate those that are the most repulsive to the American people. Though he hasn’t yet equaled Obama’s choice of a podophilic member of NAMBLA as a Safe Schools Czar, it appears he is taking the competition seriously.

“11/14 – When mutiny is the only honorable choice” Damn this insidious regime for putting our military in this position.

“11/15 – The Ten Stages of Genocide Are Hitting a Little Too Close to Home” Probably the only thing in the way of full steam ahead on this is gutless leftists standing around waiting for someone else do the dirty work.

“11/15 – The war on police and vaccine mandates leave a child to watch his father die” I’m sure someone explained to the child that at least ANTIFA can operate with impunity furthering the cause of social justice and fascism, so his Dad died for a good cause.

“11/16 – 7 Media Lies Katie Couric And The Aspen Institute Would Decry If They Really Hated Disinformation” If someone wants to do some real deep-digging investigative reporting, find some instances where the Democrats’ Ministry of Propaganda has told the truth. Hey, when are those racist Border Patrol Agents that were using whips on those poor illegal immigrants going to be held accountable?

“11/17 – A MODEST PROPOSAL FOR THE CAMPUS DIVERSITY-INDUSTRIAL COMPLEX” What if they just fired all of them? I’m still waiting for cancel culture to catch up with Elihu Yale for being a slave trader.

“11/18 – Can the FBI Be Salvaged?” There’s always hope and the possibility. But it has to be purged of leftists. THAT is the problem. THAT is the root of all of our nation’s problems.

“11/19 – Don’t Ask About Empty Shelves, Our Leaders are Too Busy Saving the World” And saving the world was so important and prioritized over the suffering of the US citizens that idiot Biden slept through it. But the Kim’s all have had to keep the N.Korean population distracted by the false existential threat of the United States attacking them. Our own version of the Kim’s tries to distract the US public from their massive failures with the false existential threat of climate.

In that, he has a point. Patriotic citizens that care about this country do pose an existential threat to a corrupt regime. That’s why election fraud is so important to them.

It appears biden is no longer under anesthesia, what a shame.

Biden When Asked About the State of His Health: ‘Good…I Feel Great, I’m Looking Forward to Celebrating my 58th Birthday’

The thought of Harris* being in charge, eveni fi only as a formality for a few minutes makes me break out into hives

The libs know that she won’t be confirmed, keep an eye on the replacement nominee. They’ll be almost, but not quite, as bad.