The “selfless heroes” of Kenosha 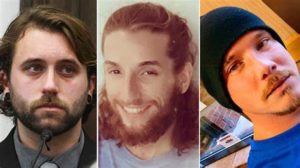 On Aug. 16, 2020, just days before the Rittenhouse shootings, he was arrested by cops in West Allis for allegedly “prowling” when he was nabbed videotaping police vehicles in a police department parking lot around 1 a.m.

“Gaige appeared to be videotaping personal vehicles in the rear police parking lot,” according to a police report obtained by the Mail. “Gaige made clear his anti-law enforcement views. Gaige was arrested for prowling, booked, cited and released.”

On May 9, 2015, Grosskreutz was stopped by police in Greenfield, about 40 miles from Kenosha, after cops reported he had “bloodshot and glassy” eyes — with the officers recovering a 9mm Glock 19 handgun from his vehicle.

In 2013, he was charged with smashing the bedroom window at an ex-girlfriend’s home at 4 a.m., with the woman claiming he had been harassing her on the phone.

One year earlier, was hit with a felony burglary charge in New Berlin when cops said he was caught trying to sell three stolen PlayStation consoles, the outlet reported.

And in 2010, Grosskreutz was arrested and charged with hitting his grandmother in the face during a dispute, during which he also threw a lamp and damaged a wall.

The then-17-year-old swung “a lamp into the living room wall, damaging the lamp and the wall and struck her across the face with an open hand,” a report in that case said. Police said he was charged with disorderly conduct and criminal damage. In addition, he has prior juvenile arrests that are sealed, the Mail said.

Much has been made of why Kyle Rittenhouse was in Kenosha and he had good reasons to be there. Grosskreutz lives in West Allis, WI– 50 miles from Kenosha. He had no reason to be in Kenosha.

Ngo exclusive: A Portland, Ore. resident who knew Gaige Grosskreutz in real life but hadn’t seen him in a while sent me this correspondence. Grosskreutz asks him repeatedly for his address & suggests he will fly out to harm him at his home. #Rittenhouse #Kenosha pic.twitter.com/gp0aCi0yw7

Rittenhouse did not try to kill Grosskreutz. He neutralized the threat by shooting his arm. Prosecutor Binger said that bringing a weapon causes one to lose the right to self defense. That is stupid, of course, but he failed to mention that Grosskreutz also brought a gun.

“Shoot me, n—a” was Rosenbaum’s dare to armed individuals the day he was shot. Not long after, Rosenbaum would chase Kyle Rittenhouse to a parking lot where Rittenhouse was cornered. Rittenhouse had raised his weapon to scare off Rosenbaum to no avail. Only when Rosenbaum got close enough to Rittenhouse to take the weapon was he shot.

“Huber grabbed his brother by the neck, dug his nails in and choked him for approximately ten seconds,” the lawyer said. “He put a knife to his brother’s left ear and his brother felt it cut.”

“I’m going to burn the house down with all you f—kers in it,” Chirafisi told the judge Huber said.

Huber was criminally charged for the incident and took a plea deal on a strangulation and suffocation charge, Chirafisi said.

Huber smashed Rittenhouse in the head with a skateboard and then tried to take Rittenhouse’s weapon from him. And then we have jump-kick man 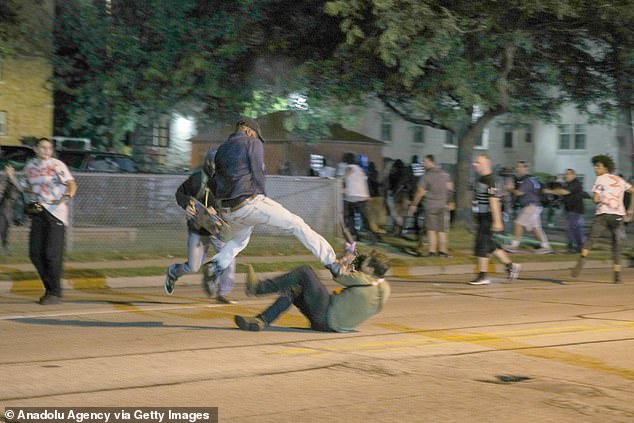 You can clearly see that Rittenhouse (being kicked in the head) is the aggressor.

Freeland has an open case of domestic violence for an attack in which he ‘tussled’ with his partner in a drunken rage, ultimately throwing her to the ground and kicking her in her ribcage before she managed to flee.

It is just one of several battery charges that feature in his record that stretches back more than 20 years and features 25 incidents in Kenosha County alone.

This a quite a collection of selfless heroes. No one is saying that any of them deserved to die but they all have a history of proclivity to violence and all assaulted Kyle Rittenhouse. That is an absolute fact. 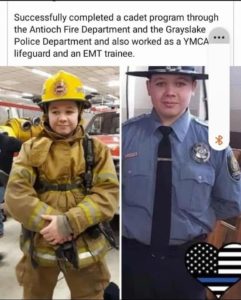 Rittenhouse had more right to be there than did any of the ‘heroes.” He was there to help protect property and render aid. The “heroes” were there to protest and vandalize. The argument from leftists has always been that Rittenhouse had no business being there but not once have I seen or heard them question why the “heroes” were there. Had those “heroes” not been there looking to commit violence none of them one would be dead or injured.

These are the same kid of  ‘heroes” who, together with the left wing media, are bent on intimidating the judge and jury in order to get the trial moved into Kangaroo Court. Fortunately, justice has prevailed.

I vote we all refer to him as “Sir Kyle” from now on.

Democrats always revere thieves and perverts. Look at who they vote for.

schomer a long time rapist of immigrants , nancy a drunk, the morainic pres.a career pedophile, the idol, cackelling vp, knee pads, and a mattress on her back, and sec. of state a closet gay what more do you want- a straight flush. They Win

Not just “D”! The Press (MSM) called the role models for these “selfless heroes” “peaceful protestors” 57 years ago. I refer to Mario Savio’s “Goons at the Gate” Cal 1964.
Their “peaceful protest” was beating the shit out of anyone with the temerity to say America was good with their F. U. C. K. signs. Another press lie; this violent censorship was called “free speech”.

FAKE NEWS has been around at least 61 years; probably longer.

Biden and his dementia cult are a clear and present danger to our democracy.

The dregs of society honored by Ben and Jerry…….sorry guys but your brand of honesty and ice cream is not on my agenda. My suggestion…..don’t buy their product.