I’m not much of a conspiracy guy but…. 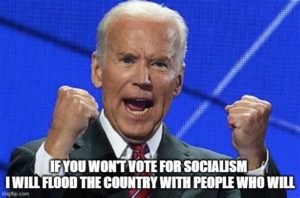 When certain events occur I like to wait for the proverbial “other shoe” to drop before opining- something the left wing media no longer does. Thing is, at some point the accumulation of data points starts to gnaw at one’s insides and an inner voice grows in volume. There are a lot of data points out there for a potentially disturbing change. What would you do if you wanted to deconstruct the United States of America and turn it into a socialist state?

We can start here- Biden wants to rebuild America, to take away any incentive to strive or work hard to achieve.

We have to once again build America from the bottom up and the middle out — not the top down. pic.twitter.com/buXXRdieyD

Everything will be free but there will be no incentive to endeavor at anything.

Our southern border has been erased. FEMA denies Federal aid to Texas to manage the border. The Director of Homeland Giveaway Alejandro Mayorkas continues to make it very exceedingly difficult to apprehend illegals.  Biden then dumps illegal aliens all around the country without any warning.

Parents want to know what their kids are being taught. The National Association of School Boards thinks otherwise. So does Gov. Terry McAuliffe of Virginia, who seven times said parents should have no say in their kids’ educations. The Washington Post concurs:

Been interesting watching the commentariat argue both “this toxic curricula isn’t really being taught in school” and “you don’t get a say in this.” pic.twitter.com/ogOg9ivog4

Liberal elites believe that schools should be free to indoctrinate children with CRT, hypergenderism and whatever other crap they choose free of parental interference.

Anthony S. Fauci, MD, director of the National Institute of Allergy and Infectious Diseases, said there is “no doubt” Donald J. Trump will be confronted with a surprise infectious disease outbreak during his presidency.
Dec. 19, 2017
The National Institutes of Health (NIH) today lifted a 3-year moratorium on funding gain-of-function (GOF) research on potential pandemic viruses such as avian flu, SARS, and MERS, opening the door for certain types of research to resume.
October 2019: Bill Gates hosts Event 201, a simulation of a world pandemic.
December 2020: Biden promises there will be no vaccine mandate.
September 2021: Biden announces sweeping vaccine mandates.
A year ago first responders risked their lives and treat those affected by COVID 19 and those first responders were heroes. Today Biden says those same first responders refusing the vaccine should be fired and promised they will end up “paying the price.”
Biden wants everyone who is not vaccinated to be fired from their jobs. Also, Biden does not require illegals aliens to be vaccinated before they’re dumped into unwitting towns. Still think this is about vaccination?

Biden takes the US from energy independence to him begging OPEC to drill for more oil. He then gives Putin leverage in approving Nordstream 2.

Jan 6 protesters who never entered the Capitol are put in solitary confinement. Those arrested are denied a speedy trial. Those who stormed the Supreme Court and the Interior Department- which was actually breached– are handled with kid gloves. No solitary, free on bail.

Those who command their subjects to wear masks routinely ignore the rule. And if it’s a Hollywood party? We don’ need no stinkin’ masks!

In the midst of a crisis the Secretary of Transportation is taking paid leave.

Ilhan Omar accuses police of not fulfilling their oath of office and blames them for the rise in violent crime in Minneapolis. pic.twitter.com/3LhuOuXEff

The Biden White House rejected a Washington, D.C., district court order that would halt the termination of civilian and active-duty military employees who sue over religious exemptions to the administration’s vaccine mandate.

The administration did not accept District Judge Colleen Kollar-Kotelly’s minute order that “none of the civilian employee plaintiffs will be subject to discipline while his or her request for a religious exception is pending,” a report said.

China is testing a hypersonic missile. Our government is responding with ferreting out conservatives from the military, celebrating trans Admirals, defunding the police, stripping white people from the Intelligence Community and ensuring we all use the proper pronouns.

Like I said, I’m not a big conspiracy guy but this all seems to have an end game in mind. Some might argue it’s all coincidence. On the TV program NCIS the lead character Leroy Jethro Gibbs has a list of rules.

Rule 39: There is no such thing as coincidence.

What do you think the goal is?