How Biden and Buttigieg caused an oil spill in California 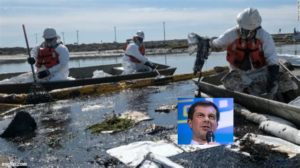 There was an oil spill on off the coast of California. 144,000 gallons of oil were spilled. You also might note that there is now suddenly little interest in the story and there is a reason for that.

Oil has been leaking since about October 3 and officials set about to determine the cause. It was noted that the pipeline was moved more than 100 feet along the ocean floor. The pipeline also suffered a 13 inch tear.

It was most likely caused by an anchor.

Why did this happen? Well, it was pretty much inevitable as there is a giant backlog of cargo freighters waiting to be offloaded on the California coast and it’s going to cause trouble for Americans.

SANTA MARIA, Calif. — A sea of frustration is rising for American consumers during the pandemic. The port backlog at the Los Angeles Port is causing a ripple effect all the way up to the Central Coast as items are being taken off the shelf. Currently, dozens of container ships sit idle off the Port of Los Angeles and Long Beach waiting to be unloaded.

Consumers might be seeing as much as a 20% increase in goods for the holiday season. Shortages are also expected.

The US Maritime Administration is part of the Department of Transportation. Check out the bold text:

The Maritime Administration is the agency within the U.S. Department of Transportation dealing with waterborne transportation. Its programs promote the use of waterborne transportation and its seamless integration with other segments of the transportation system, and the viability of the U.S. merchant marine. The Maritime Administration works in many areas involving ships and shipping, shipbuilding, port operations, vessel operations, national security, environment, and safety. The Maritime Administration is also charged with maintaining the health of the merchant marine, since commercial mariners, vessels, and intermodal facilities are vital for supporting national security, and so the agency provides support and information for current mariners, extensive support for educating future mariners, and programs to educate America’s young people about the vital role the maritime industry plays in the lives of all Americans.

So what is being done about this backlog? In a word, nothing. That begs the question- where in the world is Pete Buttigieg? You might remember him. He’s the Secretary of Transportation. He has one job and the above is that job. His boss also seems oblivious to the situation. The left wing media has lost interest since it could further degrade the public’s view of Biden.

Supply chain issues are going to result in a significant amount of discomfort for Americans in the coming months. The initial shortages are going to be Chicken, lumber, microchips, gas, steel, metals, chlorine and ketchup packets. Then it grows to other products.

Neither Biden nor Buttigieg have done a thing about this problem and show no signs of doing anything soon. Their inaction allows the logjam to continue and boom, an oil spill consequent to the freighters jamming the coastline. It almost seems intentional.  Biden’s approval ratings are cratering. He is down to 38% and this is going to do nothing to improve that. Supply chain issues only add to the punishment being doled out by this moronic and incompetent regime. Then again, perhaps people need to be rewarded for the choices they make.

Considering what Mayorkas has done on the border, Blinken did in Afghanistan, Walsh had done with jobs, Garland has done with the DOJ and Austin has done with the military, maybe it’s best that Buttigieg stays in whatever bath house, rest stop or gay bar he is in. Has any of idiot Biden’s cast of clowns ever, in the history of his fraudulent regime, made any situation in the country better?

Looks like every day more and more of the staff of this administration proves they are morons! State tells the world how many nuclear weapons we have, the military leaders tell our enemies when we will be attacking, the president pleads with OPEC to provide more oil as he shuts down the US sources, the DOJ are labeling parents concerned with the activities of the school board members dictating their children’s education, the CDC lies about a non-existent pandemic by making up the “science” and drugs and illegals are flooding across our borders. The president even welcomed a P poor jobs report because it is only terrible instead of extremely terrible. I guess those who voted for this administration are also proving they are morons.

Jen just stated, in response to a Doocey question, that idiot Biden has had people on this problem since January. So, this is what 9 months of idiot Biden’s regime working on a dire problem looks like.

The difference between humans and animals. Animals would never allow the dumbest of the herd to lead them.

SERIOUSLY! Dr John, that headline brought to mind an image of the two of them I can never unsee…

You need to add Gov. Screw you all Nuisance to the list, he and his ‘gotta save the planet from something I have no clue about’ agenda is totally screwing up trucking and transportation in this state and it’s only going to get worse when we go totally green with not anywhere near green electric Semi’s.

Funny, the ports in Savannah and Charleston are going full blast. The trucking company that I retired from is adding more trucks and drivers, and there’s a shortage of chassis because so many containers are moving.
The chassis owners are bring more down from the Northeast ports.

Since almost everything Joe’s peeps have done had some lefty agenda behind it, perhaps this, too is part of a larger plan.
China can be seen as having surrounded the USA with a blockade.
And, look at these photos of the Chinese missile launcher hidden inside a container on top of a civilian container ship!

As Thousand Of Cargo Ships Are Anchored Around The U.S. Lets Take A Look At China’s Latest Weapon That Turns Any Merchant Ship Into A Warship ( Photos & Video)

Perhaps these are not currently ringing our country, but they could do so whenever China wants them to.