The Big “Why” Of The Western World 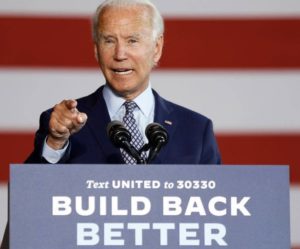 Extraordinary and obvious madness is flooding Western society. A society privileged to have reached a stable and apparently too comfortable state of being. This state of comfort and well-being is a unique event in human social, economic, and cultural history. It has also left our society vulnerable to abuse, corruption, regression and upheaval.

In America, this means erasing and rewriting history, and most critically, destroying the Constitution — the very same Constitution which created the world’s very first system of government for a Nation that was not an heirdom, kingdom, or dictatorship.

The new talking points from so many shills who don’t know what they’re saying includes phrases like, “Great Reset,” or “New World Order,” or Biden’s favorite, “Build Back Better.” Most of us listen loosely to this babble, usually dressed in euphemisms because it comes from the mouths of people we deem to not command our respect, and who don’t seem to fully grasp what they’re saying. People like Biden, Obama, AOC, or Canadian PM Trudeau. Unfortunately, the world elite and billionaires behind those words aren’t dumb, they are willful.

Here’s the Prime Minister of Canada doing as he is told:

“This pandemic has provided an opportunity for a reset. This is our chance to accelerate our pre-pandemic efforts to reimagine economic systems that actually address global challenges like extreme poverty, inequality, and climate change… Building back better means getting support to the most vulnerable while maintaining our momentum on reaching the 2030 Agenda for Sustainable Development.”

This is the same ignorance which recently dismissively stated, “I don’t think about the economy.”

Biden is also doing as he’s told and uses “The Great Reset” as his poster on a podium. His whole political agenda is unlike anything America has ever witnessed. Borders are completely open to illegal immigrants, and open to the worst drugs killing our youth. A formerly energy-independent economy is now looking for oil and gas from the Middle East. Complete destruction of jobs across the whole middle class. Massive government spending increases and raising the debt ceiling. Pushing a self-hating agenda and promoting crime which has dramatically increased from just one year ago. This is better than anything the wildest dreams of the Globalists’ America-destruction could have hoped for.

Most of the media is doing as it is told as well, and that is disconcerting since those who pushback get assaulted by the cancel culture.

So why are these mouthpieces flouting a Great Reset that will get rid of capitalism, turn all of us into renters, build a massive weaponized communist bureaucracy, advance an international green agenda, control our beliefs, hold sway over our bodies and establish a new global order that will rule all elements of our lives? The failure of the EU experiment does not matter to them — changing America is the key. Full steam ahead.

We know that each year an enormous squadron of executive jets overruns Davos, Switzerland, delivering wealthy business, political and intellectual leaderships to a conclave where their minds will be compressed and funneled to follow the plan.

All these people are humans and want to be liked. They also want to continue holding onto their wealth. Listening to the dictates of the world’s senior bankers goes a long way toward making sure the wealth stays where it is. When nine trillion dollar funds like BlackRock order you to do something with your multinational company, you do it.

These Davos devotees are not there to “decide” what to impose on the unsuspecting public. They’re there to listen and to take notes on what their marching orders will be. And they all fall in line. 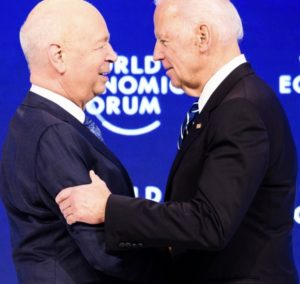 A Canadian named Maurice Strong, was co-founder and former Chairman of World Economic Forum. Let’s look at this foundational statement from him:

“What if a small group of world leaders were to conclude that the principal risk to the Earth comes from the action of the rich countries? And if the world is to survive, those rich countries would have to sign an agreement reducing their impact on the environment. Will they do it? The group’s conclusion is ‘no’. The rich countries won’t do it. They won’t change. So, in order to save the planet, the group decides, isn’t the only hope for the planet that the industrialized civilizations collapse? Isn’t it our responsibility to bring that about?”

“The world must act jointly and swiftly to revamp all aspects of our societies and economies, from education to social contracts and working condition. Every country, from the United States to China, must participate, and every industry, from oil and gas to tech, must be transformed. In short, we need a ‘Great Reset” of capitalism.”

He claims in his book, Great Reset, that 395 million new jobs could be added globally by 2030, and of course that requires spending $3 trillion dollars annually in third world countries to get the world off the road to climate catastrophe. Details? Don’t trouble this addled mind.

There is no need to exaggerate what these Malthusian Globalists intend, or what their shills are prepared to do.

Moving across the upper reaches of the dictatorial bunch, let’s look at Mark Carney, former Governor of the Bank of England, UK Prime Minister’s Finance Advisor, and UN Special Envoy for Climate Action and Finance. He unabashedly uses man-made “Climate Change” to control consciousness. Here are some recent pronouncements:

“. . . . Inclusive capitalism is fundamentally about delivering a basic social contract comprised of relative equality of outcomes; equality of opportunity; and fairness across generations. Different societies will place different weights on these elements but few would omit any of them.”

“Many of the changes in our world since the 1950s are without precedent: not merely over decades but over millennia. . . . There is a growing international consensus that climate change is unequivocal.”

“The combination of the weight of scientific evidence and the dynamics of the financial system suggest that, in the fullness of time, climate change will threaten financial resilience and longer-term prosperity. While there is still time to act, the window of opportunity is finite and shrinking.”

And then there is the coup de grass he delivered this past July at the Venice International Climate Conference:

“Climate change is an existential threat. We all recognize that, and there’s increasing urgency around it. But the converse is, if you are making investments, coming up with new technologies, changing the way you do business, all in service of reducing and eliminating that threat, you are creating value. And what we have seen increasingly, spurred initially by the Sustainable Development Goals, accelerated by Paris, and then by social movements and governments, are societies putting a tremendous value on achieving net-zero. Companies, and those who invest in them and lend to them, and who are part of the solution, will be rewarded. Those who are lagging behind and are still part of the problem will be punished.”

These autocratic despots are dangerous. They’ve brought most of our elected officials ‘to heel’ using cash and fear.

When our neighbors parrot formulaic and purposeful ‘talking points’ selling a vile agenda, we need to remind them where it came from, who is manipulating the well-paid shills, who are manipulating the puppets, and why.