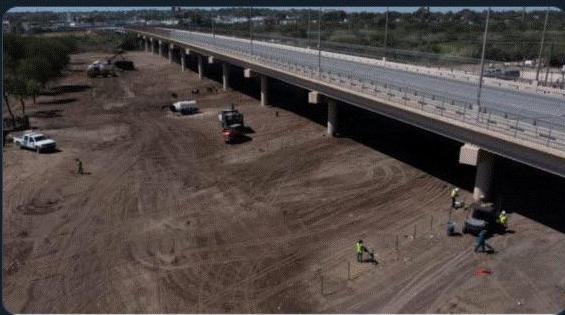 First, you see them then you don’t. Now appearing at the White House for a limited engagement, Joe Biden and his sidekick Kamala, just performed a magic disappearing trick that would make David Copperfield jealous. One day, 13,000 Haitians were crammed under a bridge in Texas, waiting for entry into the good old U.S.A. Night fell and the curtain came down. When America awoke the next morning everyone was surprised to discover that the Haitians had vanished. Where did they go? Only the shadow knows.

They disappeared right before our eyes. When queried by the crack White House reporters, Press Secretary Peppermint Patty said, “Haitians, what Haitians? I don’t see no Haitians. I’ll circle back to that later-HEY, Joe says free ice cream for everyone!” Some theorize the Haitians were abducted by aliens (no pun intended) and were swiftly placed in stasis like the movie The Matrix. They are now in a virtual reality simulator and think that they actually live in Chicago. They are totally loving the deep dish pizza but the drive-by shootings, gang warfare, and terrible traffic not so much.

Another excellent theory is that they were transported, in the dead of night, into Kohler, Wisconsin, and were give free passes to watch the Ryder Cup golf tournament. Sure, that sounds crazy, but try to find an open hotel room anywhere near the Whistling Straits Golf course. A coincidence? I thinketh not. Handlers were accused of discrimination because they forced the Haitians to wear blue and yellow outfits and pretend that they were from Europe. In another dramatic moment, two Haitians were ejected from the course because they were observed holding a large, red banner that read: TRUMP WON IN 2020! That was embarrassing. An angry DHS Chief, Alejandro Mayorkas, said those two Czechoslovakian dudes would be immediately punished, banished from Wisconsin forever, and immediately sent to …wait for it…California. That is tough love baby. No more beer for those dudes and Alejandro even confiscated their complimentary cheesehead hats.

Another theory is that all the Haitians went home. Sure, they travel 2,000 miles and finally arrive in Texas, under a bridge. Then, the wives turn to their husbands and start yelling, “This is it? You dragged me 2,000 miles to stand under a bridge? What a moron! We have bridges in Haiti-it’s where we hid during the 7.0 earthquake in 2010 that destroyed our home. Ringing any bells? Our island was totally devastated. We waited in vain for Bill Clinton (Mr. Hope and Change) to build houses. All we got:

“…were structurally unsafe trailers with high levels of formaldehyde and insulation coming out of the walls. There were problems with mold and fumes. The stifling heat inside made many of the Haitians sick and many of them abandoned the trailers because they were ill-constructed and unusable.”

Where are Haitians? Another theory is that they are headed to New York to remind Bill and Hillary Clinton that “It’s one thing to rob from the rich but quite another to rob from the poorest of the poor.”

Wherever the Haitians are today, Wisconsin, Zion, or New York, I wish them God speed and good luck.