Biden: Bringing the best of Afghan culture to the US 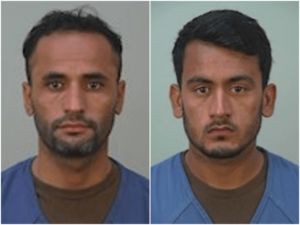 There is no question that the Afghans who aided American troops should be allowed into this country but that’s not what happened. The US did evacuate some but left many behind, along with many Americans. Biden screwed this up as badly as he has screwed up everything else. In the chaotic surrender of Afghanistan to the Taliban and the failure to properly vet the evacuees Biden brought to the US some really interesting culture. Harassment of women is a common occurrence in Afghanistan and that is part of the cultural enrichment Biden has imported to the US.

The FBI reportedly launched a probe into an alleged attack of a female soldier at the hands of several male Afghan evacuees housed at Fort Bliss, officials from the agency and the U.S. Army post confirmed Friday.

At Fort McCoy in Wisconsin an Afghan man strangled his wife

She also told the soldiers that Imaad had struck their children on multiple occasions. [Emphasis added]

The woman said this was not the first time she was assaulted by Imaad and that he had “beat me many times in Afghanistan to the point I lost vision in both eyes.” She told a soldier Imaad threatened to kill her or send her back to Afghanistan “where the Taliban could deal with her.” [Emphasis added]

On Sept. 9, the woman fainted and received medical treatment. She told a soldier that Imaad had hit, choked, verbally abused and assaulted her since she arrived at Fort McCoy. [Emphasis added]

According to prosecutors, Noori is accused of trying to forcefully engage in sexual acts with a minor while temporarily living at Fort McCoy since being brought to the U.S. with tens of thousands of other Afghans. Noori has also been charged with three counts of engaging in a sexual act with a minor and one count alleging the use of force.

An indictment against Noori states that his victims were under the age of 16 and were at least four years younger than him.

That Imaad’s been a busy boy

In a separate incident, Imaad is accused by prosecutors of strangling and suffocating his wife while temporarily living at Fort McCoy after arriving in the U.S. from Afghanistan. The alleged assault apparently took place on September 7.

Pentagon response? We’re aware of it.

We won’t even get into the Afghan dancing boys.

Some Afghans gotta Afghan. And to think we left the good ones behind.

Funny, before I read this article, I was thinking about how the idiot Biden regime doesn’t even PRETEND to possess any semblance of transparency. All they care about is the façade they put up in front of their cavalcade of failures.

I’m not sure how idiot Biden expected the Afghanistan withdrawal to go when he pulled all the troops out first and abandoned Bagram first thing, but of course it turned into an absolute embarrassing disaster. To put forth a façade of something other than utter failure, the troops idiot Biden had to send BACK to Afghanistan began loading anyone and everyone onto airplanes and flying them out to give the semblance of evacuating Americans and loyal allies.

Numerous nations (including this one, by the way) have bad experiences with importing fundamentalist Muslims. But, those facts don’t deter idiots like Biden, especially when he can rely on the leftist media to suppress any annoying stories like a female soldier getting gang-assaulted by people we had the sympathy to rescue from the Taliban who, along about now, might be raping THEM.

The failing economy, the border disaster, pissing off one ally after another, kowtowing to China, granting Russia blackmail control over the EU and, of course, a complete disaster in Afghanistan are all adroitly handled by idiot Biden just turning his back on questions and walking away. After all, all the bad perceptions of reality just vanish if you ignore them… right?

the pdeophile’s dream job is F++king America. he did it in the senate and as a schmuck vp. nothing has changed.

what do you expect from 5th century animals. soon, very soon his type will be leashed onto American soil and cities to rape, murder and assault American citizens. then in sanctuary cities like chi., atlanta., columbus,ohio, they will be let free thanks to the liberal, moronic judges in these cities. Raymond Ibrahim, in his seminal work, explains the mentality of these less than human, animals. In 1594, a serbian bishop, Theodore of Vrsca was skinned alive for refusing to submit to islam. this is the fate of all that oppose islam. Read history for it will bite this moronic administration in the ass not only now but in the future.

Biden is Democrat and Globalists and a Traitor