Seems to me one may not be part of the Biden regime unless one is a bald face liar. The three that jump to the top of that list are Biden himself, Jen Paski and Alejandro Mayorkas. They are not simply liars, they are pathologic liars. They represent a monumental threat to the United States of America. They are incapable of being truthful.

Biden and Mayorkas have been failures at securing the Southern border and they needed a scapegoat. The CBP is that scapegoat.

First, a little history. The CBP has been using horses to help secure the border since 1924.

The wild horse is particularly suited for border enforcement, agents say. While horses were essential to the Border Patrol when it began in 1924 –- all recruits were required to own a horse and a gun –- over the decades advances in technology left the horse behind, and the number of horse patrol units declined.

There’s a reason for using horses

But in the early 2000s, CBP began investing more money into its horse program. Today in the field, horse patrol units with wild and domestic horses work alongside helicopters, drones, sensors and other high-tech tools. Horse sense is an “old school” technology, said Bobbi Schad, operations director for the Tucson Sector. “Their sight’s better, their hearing’s better. They can travel further, a lot faster than we can.”

Sure-footed and tough, wild horses are built to handle the harshest environments, from the rocky gulches and jumping cholla that cover the ranchland in Nogales, to the sweltering, thorny corridors of the Rio Grande Valley. “They’ll give us 10 hours of good work in the south Texas heat,” said Ruben Garcia Jr., horse patrol coordinator for the Rio Grande Valley. “And they won’t skip a beat.”

They often are used to aid invading illegals

The horses work in an intense environment. On any given day or night, Border Patrol agents respond to a multitude of high-stress situations, from assisting sick migrants in the desert to apprehending frightened mothers and children, to facing armed and dangerous smugglers.

Way back (dude, this is like 5 years ago) horses were routinely used to round up invading illegals (keep in mind this is from NBC)

On a recent Friday in the Rio Grande Valley, the horse unit was dispatched to the parking lot of Jack-in-The-Box in Hidalgo, Texas. A group of young men and teenage boys had been apprehended after scaling the levee with a ladder. They had traveled north for a month, from violent Central American countries like Honduras and El Salvador, before crossing into the U.S.

The group sat against a CBP van, their faces dejected. Helicopters swirled overhead. Without warning, agents galloped from the restaurant, down black tarmac, then cut toward a fenced lot full of semi-trucks.

Flanked by horses, agents found another young man, hiding between the trucks.

Nostrils heaving, sweat rising off their flanks, the horses flattened their ears as he was led to a waiting van.

These horses are trained by prison inmates in what is a very symbiotic program.


At the prison in Florence, a cactus-dotted town about 140 miles north (225 km) of the Mexican border, participating prisoners round up their horses before dawn and work all day under the watchful eyes of Randy Helm, the third-generation rancher, former narcotics officer and self-proclaimed “cowboy preacher” who supervises the program.

Over the course of four to six months, the men train their horses – with names like Billy, Rocky and Patches – to tolerate bridles and saddles, respond to commands to trot and canter and perform footwork that will come in handy on the uneven desert terrain along the border. Helm, 62, teaches the men not to “break” the horses, but to “gentle” them. The method relies on incremental steps and rewarding the horses for good behavior. Any inmate that raises a hand to a horse gets booted from the program.

“It’s more working on us than on them,” said Rick Kline, 32, who has served five years of a seven and a half year sentence for stealing cars. “It’s a new understanding of calming down.”

So it’s been good until democrats could make a racist issue of it.

Seems the first idiot to light this fire was a knee jerk named Matt Stieb from the inaptly titled Intelligencer.

Not “appears” to use. Uses whip.

It all went downhill from there. Led by the three stooges (Biden, Mayorkas and Psaki) lies were hurled without a single thought behind them.

DISGUSTING — Jen Psaki smears Border Patrol agents, going all in on the fake whips story, saying it was “horrific” to see them “on horses” being “inhumane,” “using brutal and inappropriate measures against” Haitians

Mayorkas attacked his own agents for doing their jobs properly.

DHS Secretary Mayorkas attacks his own employees, trashing them for having used “horse patrols” and thus “painfully conjured up the worst elements of our nation’s ongoing battle against systemic racism.”

So, again, Mayorkas is going after the horses for having perpetuated racism pic.twitter.com/IfYV6o2nxm

President Joe Biden berated American border patrol agents for using horses to confront migrants crossing into the United States on the Southern border, vowing they would be punished.

“To see people treated like they did, horses running them over and people getting strapped, it’s outrageous I promise you those people will pay,” Biden said, despite no publicly available evidence to back up his claims.

Now let’s “circle back” to the Circle Jerk

I don’t know how Psaki sleeps at night. One would have to be a sociopath to be able to lie like this without a conscience.  BTW have you seen this? 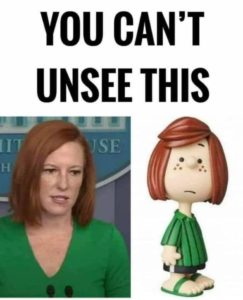 The rest of the left wing cesspool piled on. Maxine Waters suggested this was worse than slavery. Kamala Harris thought she’d found a safe house from which she could proclaim she was “deeply troubled.” Biden suspended the use of horses by the CBP, knee capping them in their work.

Now for the facts

No one was whipped. The photographer:

The photographs, which were taken Sunday, appear to show agents on horses with a whip in hand. The photos caused outrage because from certain angles, it appears to show Border Patrol whipping migrants, but photographer Paul Ratje said he and his colleagues never saw agents whipping anyone.

“Some of the Haitian men started running, trying to go around the horses,” Ratje said.

Ratje is a photographer based in Las Cruces and has been in Del Rio since Friday. He said took the photographs from the Mexican side.

“I’ve never seen them whip anyone,” Ratje said. “He was swinging it, but it can be misconstrued when you’re looking at the picture.”

Despite this all left wing “fact checkers” could not be bothered to note the perpetuation of the lies.

Rather than seek the facts, democrats in their typical fashion smeared the CBP without so much as a thought – thinking is a capacity that seems to elude them. Likely these otherwise useless politicians needed something to distract from Biden’s galactic failures at pretty much everything as well as Hunter’s laptop. The problem is their pleasure will be fleeting as the truth eventually frees its throat from their clutches. The sheer magnitude of deceit on the part of this regime is mind boggling.

Think your President should visit the border?

“How come you’ve never been to the border?” pic.twitter.com/NV479aCiVK

He never has. Never.

It’s only been 8 months since Biden took office. It seems like ten years. It’s hard to imagine the damage he can do do this country in the next three years especially as there are so many more horse’s asses in the White House than there are horses.

Wouldn’t it be nice if Biden was as concerned with border security as he is with this garbage?